The story of The Uncatchable Number 267 begins with a moment in history without a past. The first time I laid eyes on the mare with only a number for a name, I thought, "Wow... that mare is so pretty. How did she end up like this?" I was in a golf cart at feed time, grain buckets in hand, riding around with the summer girl whose job I was taking over. "She's really skittish," she told me as I dumped her grain into her bucket, watching the mare snort warily at me from a distance. "I don't really know much about her."

Neither did anyone. All that we knew about the mare was that she had come from an embryo transfer program, and was carrying the foal of a recently deceased mare. She came with the number 257 as a name, and also had this unceremoniously branded onto her left buttcheek. We took to calling her "Bay Girl," as anything was better than a number for a name. She was half-wild, uncatchable, and unhandled. She kicked when you pick up her feet, she couldn't be haltered (and instead had to live in one with a catch rope), and she flinched away from human touch. She was also absolutely drop dead gorgeous and a lovely mover... which you often got a good glimpse of while she was running away in the opposite direction from you.

We didn't know her breed, her age, her history, or anything about her. One thing was excruciatingly clear however.... someone at some point had been very, very mean to her. When all you are to the world is a uterus, no one cares enough to handle you with any sort of care or compassion.

I handled Bay Girl a few times over the following few months, but never for anything pleasant (here, let me give you your vaccines... let me shove dewormer down your throat.... let me hold you while we heavily sedate you for trimming...). The turning point came when all the horses came into the barn for the night due to bad weather. She lives outside in a halter with a catch rope, and we took her halter off just to see what she would do when we had to put it back on in the morning. Not surprisingly, she wanted nothing to do with it. Anything from her cheeks forward is apparently off limits for human hands in her mind, and anything near her ears and poll as well. I managed to somehow get my hand over her nose (which resulted in a lot of head tossing), and after she had backed up twice around the stall with me at her nose, she finally stopped and I somehow got the halter on. I think if I hadn't been the one feeding her for three months prior to this event, I would have never been able to even lay a hand on her, even in a stall. At this point, all I could do was feel sorry for her. How on earth did such a nice mare end up this way? She deserved so much more.

I asked my boss if I could handle her. She said yes. (Score!)

My work with Bay Girl has only just begun. There are lots of things that she currently does not or can not do, but there is so much promise and potential in there. She does crosstie, and she does tie (or well, she hasn't set back yet...). She stands (mostly) for grooming. She is jumpy when you move too fast, but there is never that rolling white of panic in her eye. In fact, I have yet to see her truthfully get panicky... I have yet to see white in her eye at all save for when I somewhat unceremoniously tossed the crownpiece of her rope halter over her neck when I was trying to halter her in the stall (she had stretched to the height of a small giraffe at this point). I can't really blame her for that... and even then, with a soothing word from me she stopped moving and didn't flail or panic even though she was squished into the corner of a stall with no escape. Behind the jumpiness is a sensible mind... even standing completely alone in the very scary AquaTread barn (with filters running and everything), she never bothered to look at a thing, cry out for anyone, or squiggle unnecessarily. She deserves so much more than the life that she has been dealt. She currently does not halter, clip, pick up her feet without kicking, appreciate handling of her face, or tolerate having her mane fussed with (although I managed to do a pretty good hack job with scissors despite all the head tossing!).

She is very pregnant at this point in time (and we have no idea when she is due), so she isn't going to be doing anything strenuous anytime in the near future. But I intend on at least making her easy to catch and easy to handle... and get some basic groundwork in too. After the foal is here and after it is weaned.... well, we'll see! She has a VERY long way to go before she would EVER be ready for actual work, so I will have plenty to keep myself busy! But who knows? Maybe the ET facility will be willing to let her go to a different home where she can really be loved! ;)

Just a few bad pictures of the sweetheart.... 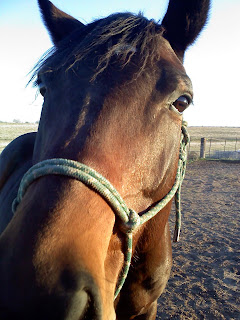 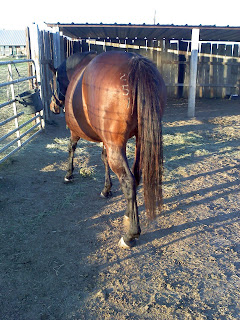 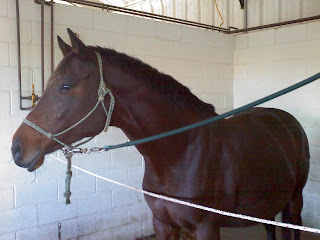 
So far, the plan with Bay Girl is as follows: spend the rest of November just getting to know her, then reassess at the end of November as to what her skills are and what she needs to have done with her and formulate a plan from there. I imagine it will mostly just be lots of handling, grooming, fussing with, and groundwork for now... stay tuned for more. Bay Girl also needs a REAL name.... I am fond of Portia, but I've also gotten Scarlett, Mona, Renata, and others floating around in my head... feel free to suggest!


Some of you coming upon this blog will undoubtedly be arriving via my other blog, Eventing-A-Gogo. Some of you may be stumbling in from various other places. Wherever you come from, I hope you stay awhile and enjoy the journey! With a mare this wild, it's bound to be interesting!
Posted by Andrea at 6:55 PM 3 comments: