(This is partially crossposted to the Pangea blog! Sorry for the overlap!)
Sorry for my brief absence - I've been out of state at a practicum for a few days and have been insanely busy in the meantime! I didn't even have time to say I was leaving! I made it back all in one piece thankfully, armed with ever-increasing knowledge and a desire to get under even more horses. (I'm glad you all are horse people, because upon reading that sentence for a second time, it could be taken horribly the wrong way.)

The one thing I never even got a chance to mention before I headed frantically off for my journey was Quincy's day. May 3rd marked the 8-year anniversary of his death, and at this point it seems like such a sad, distant memory. He's been gone for so long... sometimes it feels like just yesterday, sometimes it feels like an eternity. Take a little time to go and honor his memory, if you like reading about Pangea, Gogo, and Bay Girl. I wouldn't be here without his love, and neither would any of them.

I miss you, Fuzzman. Every day, and I always will. 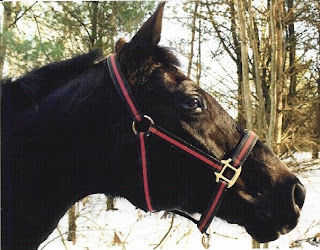 Today was deworming day for the entire farm. I long ago strayed away from this practice with my own horse, but the farm horses are still on a rotational program, so first thing in the morning I nailed everyone with their dewormer. If you remember, Bay Girl once had a violent opposition to being dewormed, but today? She stood quietly and let me do it!! I can't hardly believe it... who is this mare and what has she done with Bay Girl??

I also tried at the end of the day to give her a different kind of cookie, a flavor I haven't tried before. I've only just started to get her to accept those rock-hard Manna-Pro cookies (which was what happened to be laying around at the time), but other cookies? With one suspicious sniff, she said no. 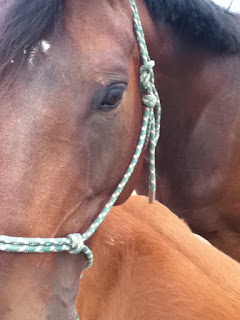 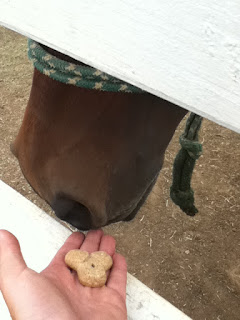 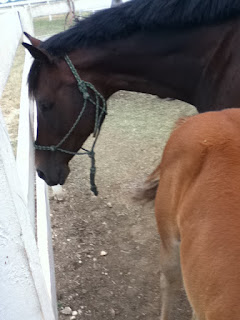 
Now, since all of you have been so amazingly awesome and helpful, I figure you guys should choose what Bay Girl and I work on next! We're essentially stuck working out in the pasture until her colt is weaned, and he is a total pest to work around. (He got an elbow in the esophagus today when he tried to mount me.... colts.) Here are the things Bay Girl knows how to do at this point:

- Catch
- Halter, but needs work
- Be sprayed down from a spray bottle
- Stand for brushing
- Feet handling
- Fly mask
- Lead and back away from pressure, but needs refinement
- Deworming
- Crossties and standing tied, mostly


Things Bay Girl doesn't know how to do:


We're pretty much starting from complete scratch on everything, but that's all right. Remember that we started out with a mare that wouldn't even come near people at all, so the fact that we've gotten this far is astounding!

My basic list of things to work on is something along these lines: introduction to clippers, practice haltering, more refinement of groundwork and leading, backing, etc., and more of this type of stuff. So readers, what would YOU work on with a mare who is limited to pasture-only work, and who has an obnoxious little colt at her side? Let your imaginations run wild!
Posted by Andrea at 6:37 PM