(Thanks to everyone to sent me well wishes, inspiration, and some helpful advice over the past few days. I'm working on trying to figure out the best course of action, and all of your encouragement really helps. Right now I just have to remember to keep getting up every morning and just to put my pants on one leg at a time, and know that that's as good a place as any to start!)

Hmmm. I seem to have a small saddle fitting problem on my hands. I'm still trying to find the perfect endurance saddle... and it's not easy. The problem is not necessarily with the horse.... it's the fact that endurance saddles are made for Arabs. O is not remotely shaped the same way.

I've been doing all my conditioning and rides thus far in the barrel saddle. It's super comfy, it fits her great, we both love it, but it is quite heavy. I feel like she really shouldn't have to tote 40 extra pounds of gear around... surely that will be fatiguing over time. Not to mention the awful ridicule and sneers that I've had to endure up until this point... Texans are extremely nice people, until you infringe upon something they feel like they know more than you about, and then they will make your life some real hell. I've been told that I'm going to give my horse ulcers 'with all that noisy tack' or injure her, that I have no business riding her in that saddle, and all of their usual horse abuser spiel. Honestly, I think it's just Texans... I hear that some of the eventers in Area 5 can be just as horrible, cliquish, and nasty. I'm quite sure this is true, having met some of the more awful ones - when I lived in New England and was showing at almost every single event there, I didn't know a single person and rarely had to interact with anyone. Down here, I'm not eventing at all, and yet I know dozens and dozens of eventers in the area - I can't walk into a tack store or go to a schooling or show without running across tons of people that I know. WHY? I find this terribly suspicious, and it's part of the reason I'm lukewarm about eventing down here... everyone knows everyone, and everyone's business is everyone else's business. I cannot for the life of me figure out WHY this is, other than it's a cultural thing... Texans are into other Texans' business, and they're not afraid to tell you all about how you're doing everything the wrong way.

I set an Abetta on her just to see if that might work, and I didn't even bother putting a girth on it, the fit was already so visibly bad. Well, it's a cheap saddle, so that's probably why it didn't work.... right?

I tried my dressage saddle on her, a saddle I know fits us both well. Unfortunately, once you get moving at speed, the stirrup leathers pinch and rub me something HORRIBLE, and I ended up with saddle sores on my calves so bad that I could barely ride for a week. My nice soft leather dressage girth also rubbed her until she bled.... yes, the same one we've used for a year without fail. We did some vigorous galloping that day, and it was too much for her paper skin. The dressage saddle is also Italian made, which basically means there is some flex and rock back-to-front naturally in the saddle - the horse's back is supposed to come up to meet it as it naturally rounds over its topline. When you're out galloping over terrain, a nice round topline is just not something you're going to have... so there ended up being too much movement in the back of the saddle. I love my dressage saddle, and you couldn't pry it from my cold lifeless hands, but it isn't going to work in this situation... not even close. But, it's a kind of purpose-bred piece of equipment, so that's why it didn't work... right?

Blog reader Meghan sent me her amazingly wonderful Stonewall to try. It was SO SUPER COMFY. Unfortunately, it ended up being too wide for her (which was a complete surprise!), and tilted downwards as our test ride progressed onward. It ended up crushing her shoulder blades something fierce, and though she was pretty tolerant, she was not amused. I tried shimming the saddle pad, but it was not really to any avail. SUCH a tragedy, as I loved the saddle and thought it was super super comfy.
The rules of the Stonewall were that if it didn't work for O, it had to be paid forward to another person in need, so it is currently with a client of mine who is an endurance newbie herself and is aiming hopefully for competition this spring. If it doesn't work for her, it will go to another person as a pay it forward, until we find a home for it where it works, with someone who needs it and couldn't otherwise afford it. Such is the magic of pay it forward!
As for the fit, it just wasn't the right one for O, and that's why it didn't work.... right?

(Obviously, at this point I was running out of ideas.)

The client that currently has the Stonewall offered up her Specialized saddle as a kind of try-it-out trade for the Stonewall. Hey, now there's an idea! Specialized saddles are raved about, and they have these really unique foam panels that velcro on and off of the saddle - so basically you can create any kind of custom fit that you like with it. You can pad them, shim them, make them narrow, make them wide... whatever you want! This HAD to work for O. If I couldn't create a custom fit this way, I couldn't see how else I could do it without going full actual custom.

I mounted up, and the second I touched down in that saddle, O's head went up and her ears went back. It felt comfy to me, but I started trotting, and she inverted and flattened her ears further. We cantered in both directions, and all she could do was cross-canter. She never cross canters, ever. Obviously, she was not a fan.

I took it off, re-shimmed it, same response. Over and over, she told me that she hated it.


Three strikes for purpose-made endurance saddles. My dressage saddle, barrel saddle, and jump saddle all fit her with no problems, no special fittings required. My conclusion here is that endurance saddles are made for Arabs, not warmbloods. Beyond that, I got nothing.

I figured I should end with something productive today after our super crappy test ride in the saddle, and spent a few minutes walking the barrels bareback, which she knows well and likes to do. We did walk-trot pattern work on the barrels the other day, and she was so slow and peaceful that she broke to the walk around every barrel, and gave me this very enjoyable little smooth trot between the barrels - that happy little disengaged pokey joggy trot that meant she was about ready to go to sleep, she was so relaxed. She loves to run, and she is a fast little lightning bolt, but the flip side of her is that she also loves to do slow easy things, and will do slow easy things all day long with no complaints. (We joke about the fact that she has one googoo crazy white sclera eye, and one very soft deep brown eye - it must make her Jekyll and Hyde!) She understand the barrels and likes to do them, and that makes her very mellow and easy to work with. When she doesn't like something (ahem, dressage), she'll let you know in no uncertain terms that she thinks it isn't worth her while.

For extra funsies today, I decided to see if I could do some sort of bridle-less work with her. I took her into the small pen, put a lead rope around her neck, and found that yes, I have reasonably good steering and brakes with just a neck rope. Her expression at this point says it all: "ugh, well, ok sure why not, I suppose." You can see her get annoyed with the backing, which is not her favorite thing to do anyway, but she gets it!

Oh yeah, and by the way, while I was spiraling into the ever-deepening madness of my depression, I forgot to tell you - I re-roached her mane! So don't be shocked!

Oh, and also don't judge her level of filth. She was literally coated head to toe in crusty mud, and I scraped off enough to put a saddle on her and that was it. Filthy beast!

Oh, also, don't laugh too hard at the end when my phone fell off the fencepost and crashed to the ground. At least it stayed up while I was riding!


The hair was getting out of control. It was looking more or less terrible, was constantly getting crimped and clogged with mud, and had taken on this enormous flare to both sides that was no longer a tameable option. It had to go. 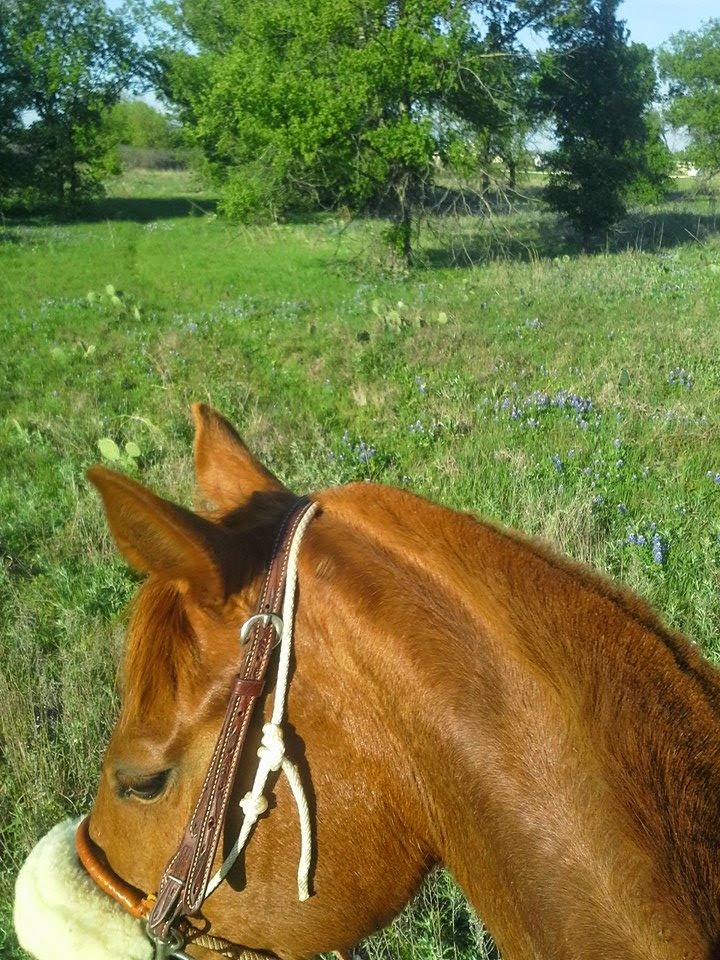 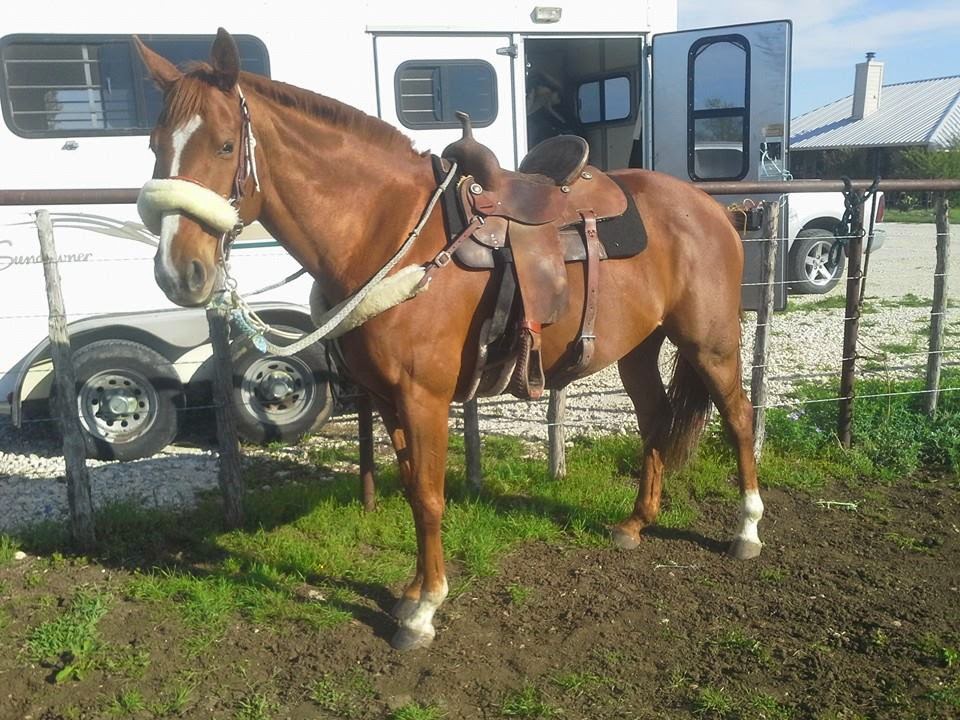 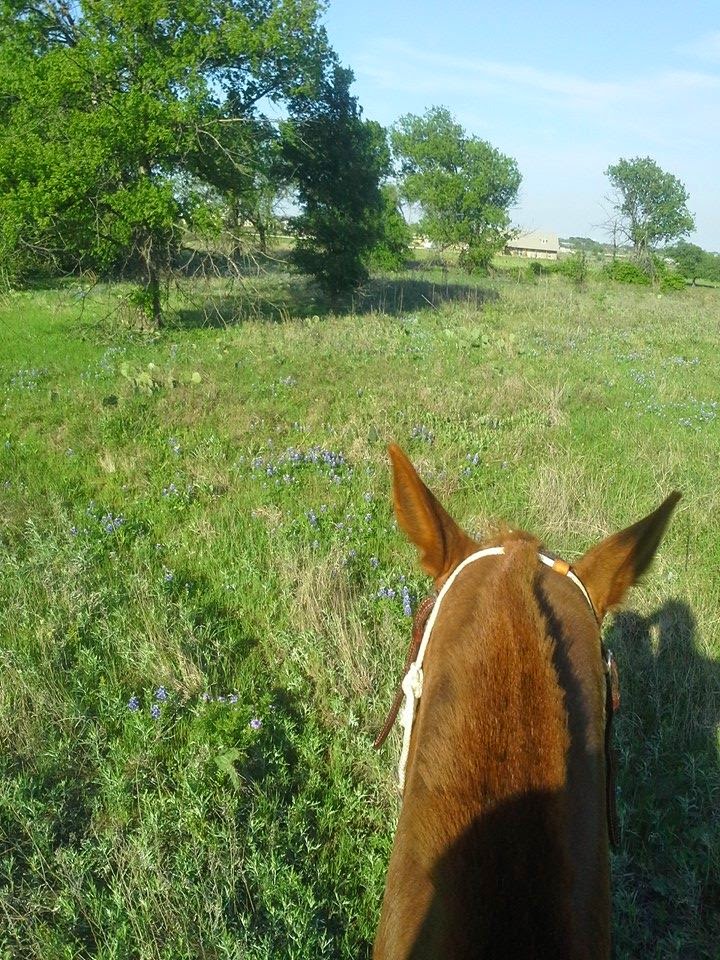 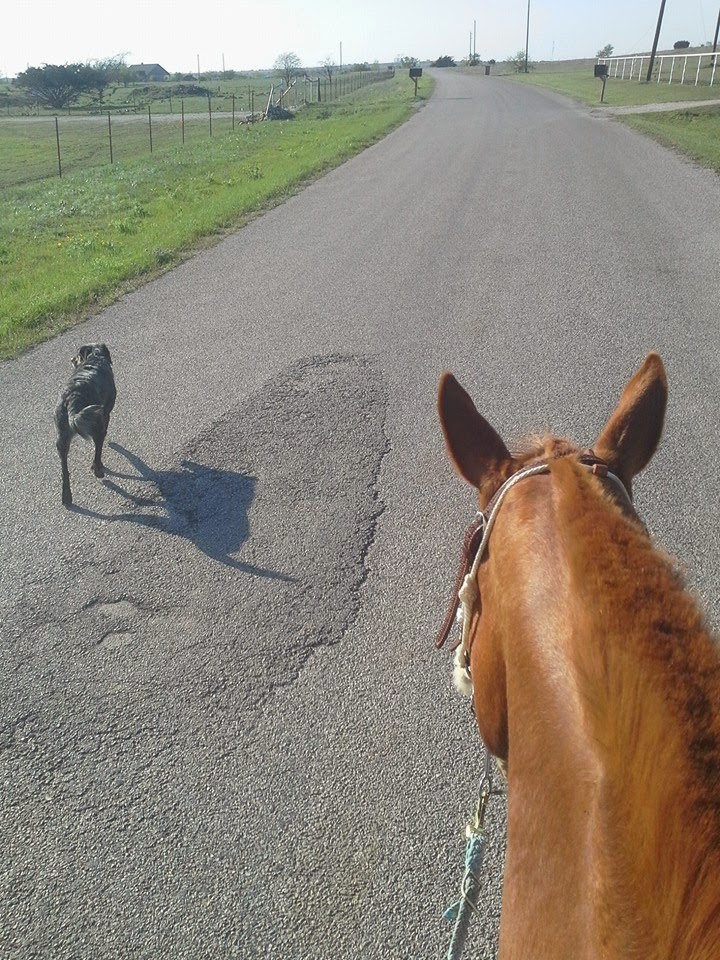 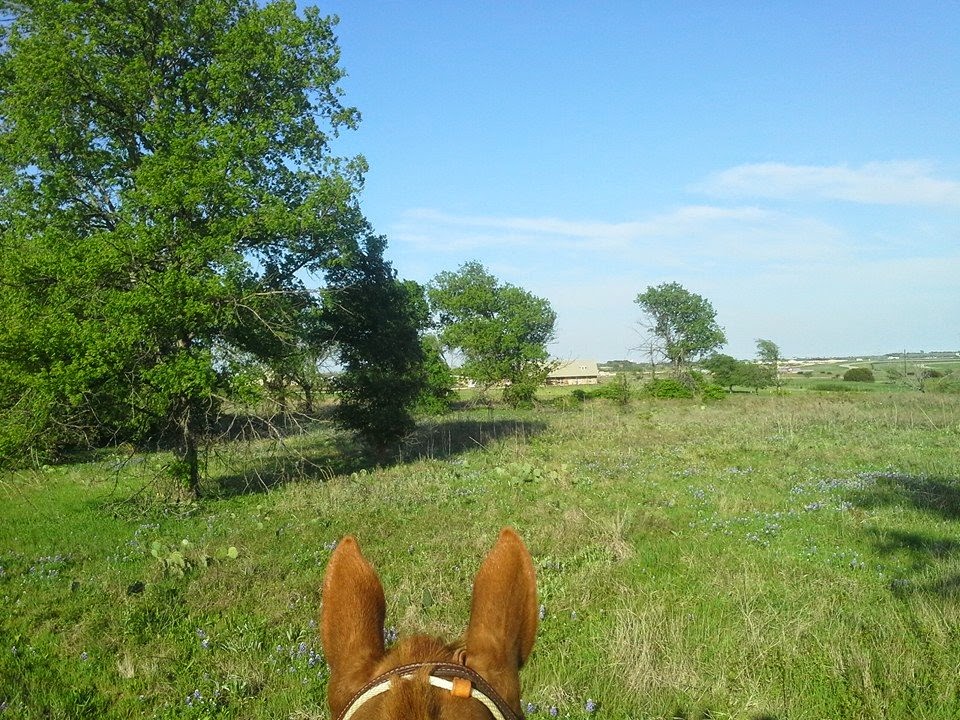 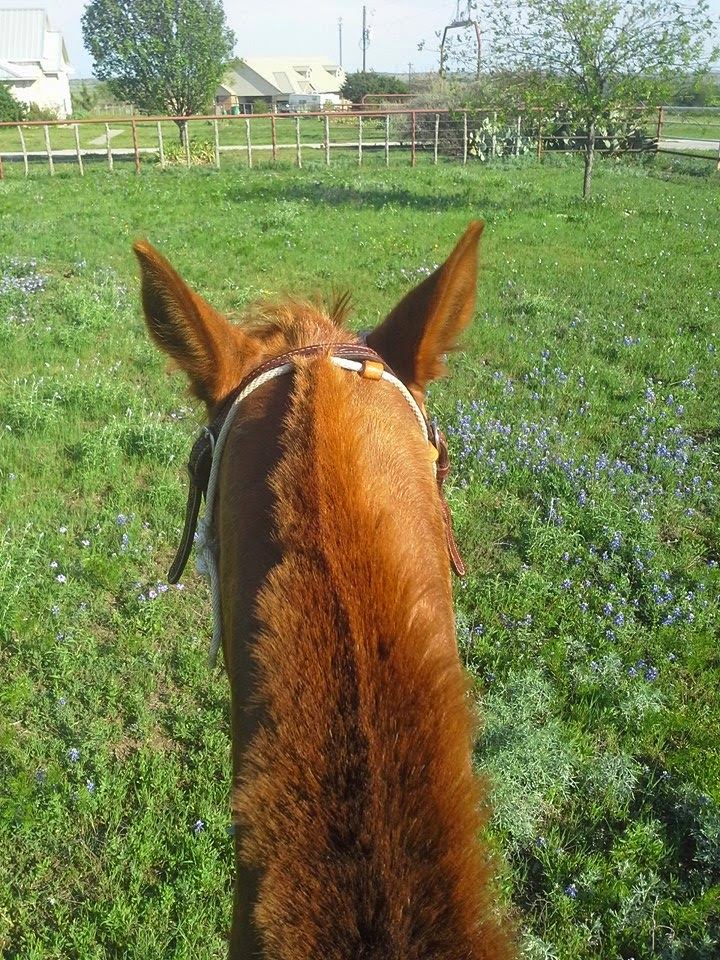 While I am horribly missing her spectacular mohawk, it truthfully doesn't look too terrible. Actually, she look very serious and militare again, which is kind of a nice bonus - I like that controlled look, versus a wild scraggly feral animal mane. 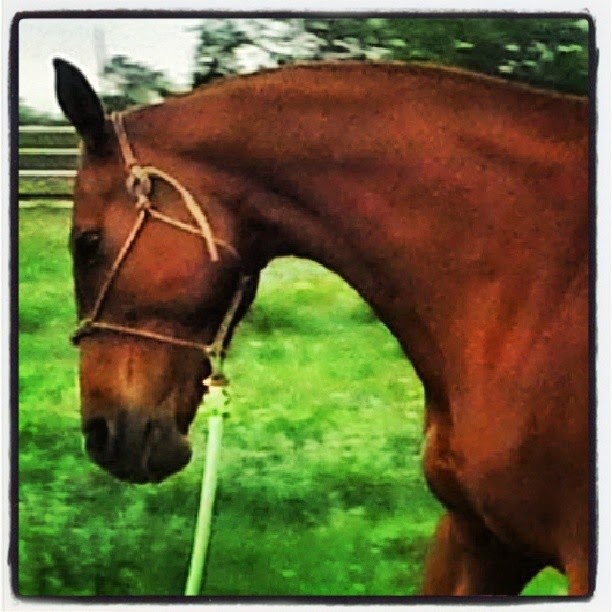 Very serious about lunging, she is.

She is pretty darn cute, any way you look at it. She rocks the barrel tack well. I will have to admit, this look is a lot better than the endurance tack, any of it... she looked like a ridiculous pony mule wearing those saddles. I'm not sure why, but all of the endurance saddles and pads were really LARGE... aren't they supposed to go on dinky Arabs? They looked ridiculous on her!

Oh well. What can you do. We'll figure something out. Or maybe we won't figure something out, and we'll keep on attempting to do endurance in a barrel saddle, enduring the painful jeers and taunts of the local endurance crowd. Or we'll give up on that idea entirely, and do something else. I don't really know at this point. 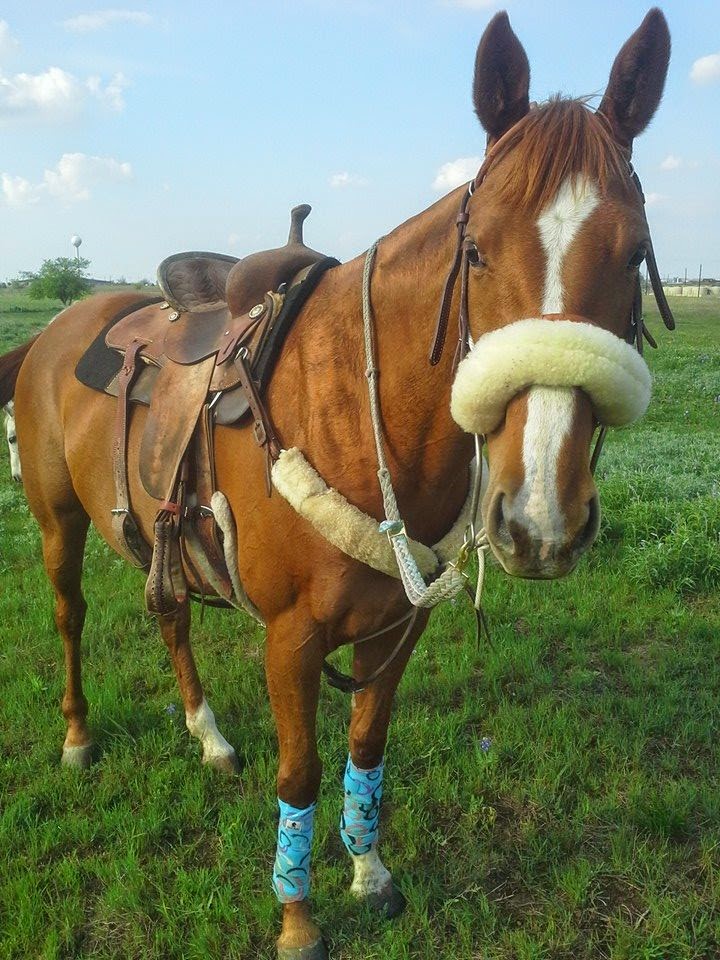 If nothing else, at least the bluebonnets are fantastic this year.... even if it is deathstorm season.... 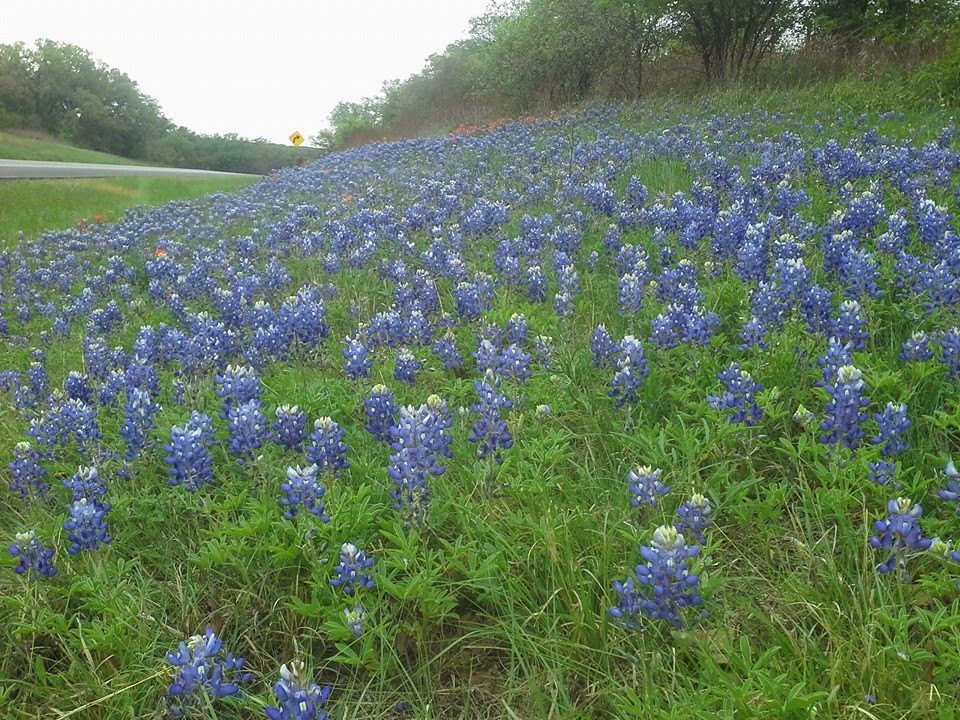 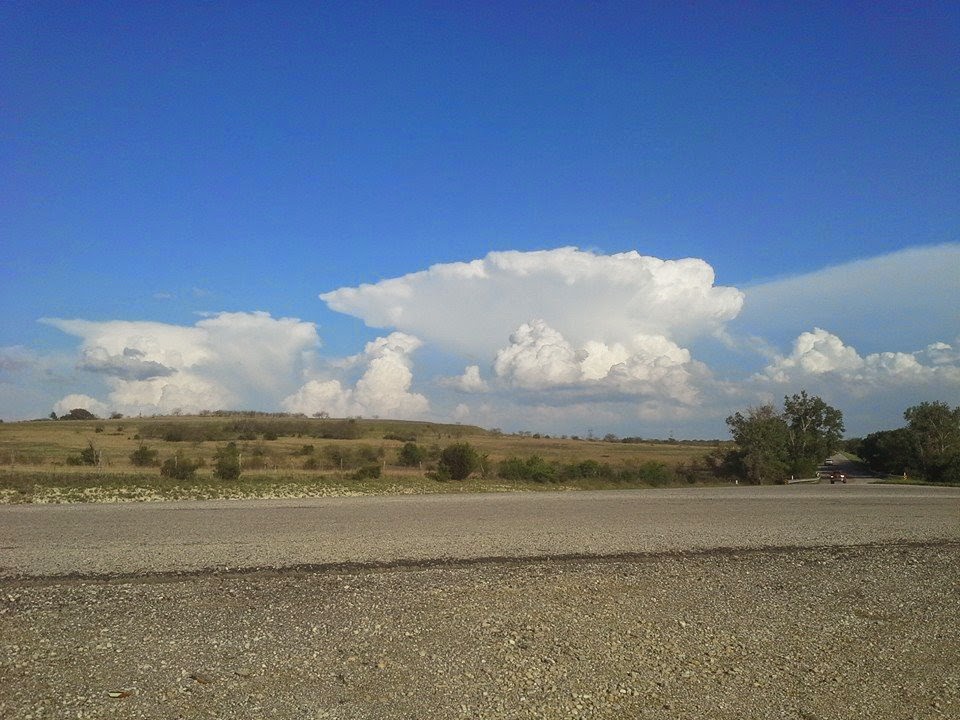