It's not like this is news to anybody, but... damn. Sometimes I forget just how completely addicting dressage is. 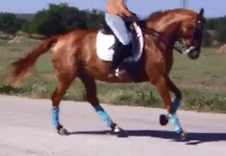 Dressage is by far one of THE most fascinating things I've ever done, and the more I do it, the more beautiful and intricate it becomes.

The longer I do it - and the older I get - the more fascinating it is. Every single moment in a ride is alive with possibilities for improvement, every single breath has a feel to it, everything is so quiet and detailed and intricate and intimate, all at the same time. You are trying to have the most subtle whispered conversation with your horse, and every moment of every stride contains energy. You are not executing movements, you are making everything about the horse efficient so he or she can glide through everything you ask like it is absolutely easy. It is not about riding figures, it is about how you can use figures o make your horse as ultimately efficient and rideable as possible. When every single moment has an energetic potential to be even better than the one before... that to me is real dressage. It is SO beyond endless circles and transitions. It is about creating the ultimate harmonious language between you and your horse, so that anything becomes possible. 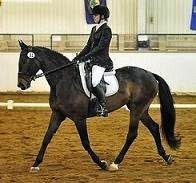 But, let's be real. Dressage - especially while showing - can be boring as hell if you're not actually doing it yourself. Watching dressage is kind of like watching the grass grow, especially at the lower levels. Being around DQs is just exhausting - they are even worse than hunter princesses, especially when they are menopausal and filthy rich. Riding huge sluggy dumbbloods (and I can call them that because I've had five of them, even though none of mine were huge or sluggy save for Metro) is also exhausting - I don't appreciate feeling like I'm humping a jackhammer every stride. I obviously can't spend $200,000 on a nice big fancy dumbblood either. I also think it is super stupid to put on makeup before you go in the show ring (totally a DQ thing, earrings included. I suppose if you have a $200,000 schoolmaster, then you also have an army of grooms to do your dirty work for you. You never have to even get sweaty.)

Because of all of these things, I always did loads of dressage at home, but didn't go to a ton of recognized USDF shows. When eventing, my horses and I were always was in the 20's or low 30's (we got a 22.0 once... a personal best and one I am unlikely to ever get again!), and when we showed in USDF shows, we did quite well too, with scores in the high 60's regularly, and a few Reserve Champion ribbons at Training and First level. None of my horses ever broke the coveted 70% at a recognized show, although they did it regularly at events. O is actually the first of my horses to break 70% at a dressage show, although it was only a schooling show. 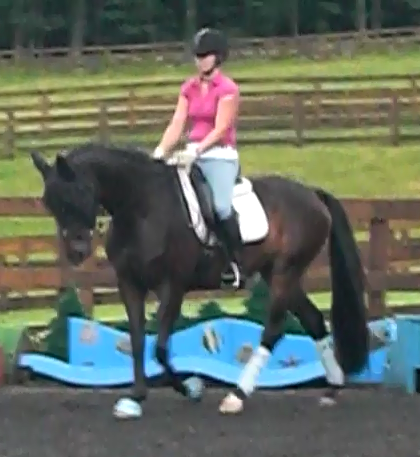 All of my horses have been dressage horses first and foremost. Quincy and I jumped a little, but we mostly did dressage work. He fell with me a few times when I was jumping (I didn't know enough about the lasting damage that EPM does to be smart enough not to jump him, at least until he fell with me a few times), and after that I was not very interested in jumping for awhile. Actually, that's an understatement... I was terrified of it. I didn't realize it until I started jumping on some lesson horses instead of Quincy, and the thought of going over even the tiniest jumps made me break out into a cold sweat. Tedi, the best lesson horse ever, pulled me through that, but it did instill a healthy amount of fear in me. Quincy and I instead focused on dressage, showing Training level with fair success and First level with no success at all. Hell, I couldn't sit the trot to save my life... I remember what a huge thing it was to make it through a First level test without feeling like I melt into a blob of jelly off the side of my horse. 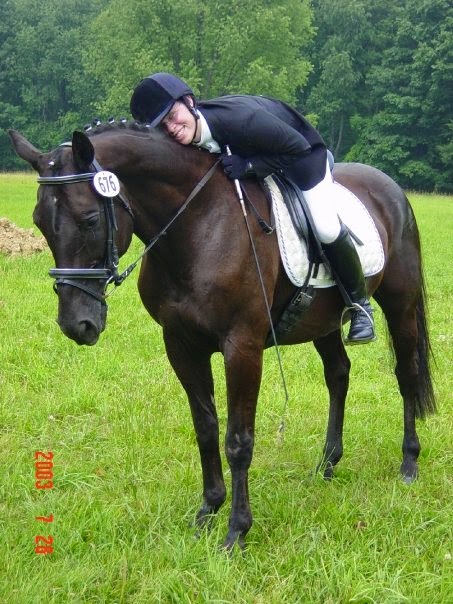 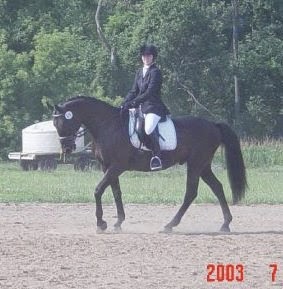 Metro and I did dressage as well, same as Quincy (Training-First levels), but we focused mainly on eventing. We did mostly Novice stuff, with a few Trainings here and there. Metro was an angel over fences... he always took extra good care of me, and jumped anything you put in front of him, no matter what. I don't really have any good pictures of our dressage work uploaded, but I will need to go through my old ones at home to see if I can find any. Metro was one cool guy... he had all sorts of buttons. When we first went to try him, I hopped on and was doing canter half pass right off the bat, even though I didn't really know how to do it. I remember doing an accidental canter pirouette on him once, which was super fun. He taught me all sorts of things. 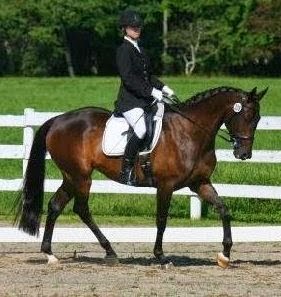 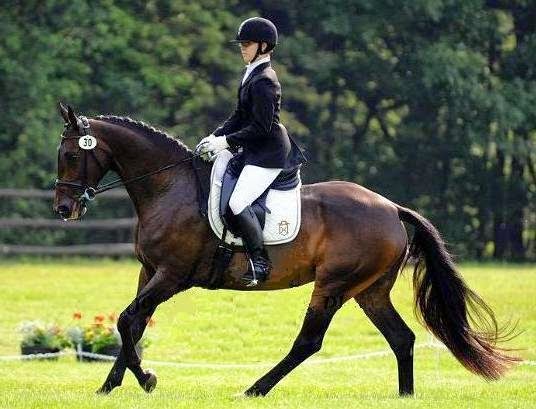 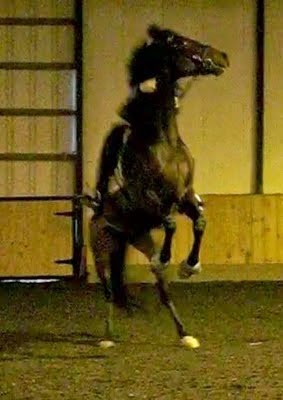 When she was on, she was on. At the time of her death, she was solidly working 2nd level (or had been, prior to her injuries), though collection was not her forte. She was a very flowing outward mover, but compression and tighter turns were not ever really her thing. She was a beautiful, fluid mover.

And of course, how can we forget my two current ladies? When P was in work, she was great. Somebody really put some buttons on her... she was just so easy in everything she did.

Her baby I bred to be primarily a dressage horse that can also be an all-arounder. I definitely want this baby to event, but I primarily want to do dressage at the end of the day, and I bred with that in mind. 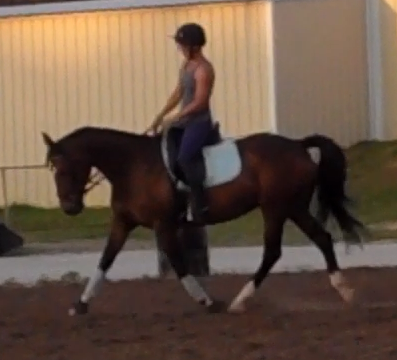 Now O... O is completely different. O is extremely difficult in everything that we do. But that is what makes it so fascinating with her, now that I have her in the double. Now that the bolt is gone, I have other evasions (like being crooked or behind the leg) to deal with. But when she is there, when she is really on... man she is ON. She's such a compact little critter, and such a pretty little mover. She could really be an upper level horse, if she can keep her panties on while we're working. Every ride is so detailed, every moment is so intense... it is so addicting to delve deeper into this with her.

Some days I am not completely sure if I really want to event or not. On days like yesterday, when not one but TWO riders were killed eventing (in two different countries even), I wonder why exactly I want to get back into it. Sometimes I don't think I do. Some days I miss galloping XC, and some days just the thought of jumping a crossrail in an arena scares the pants off of me. I'm not sure why that is.

But dressage.... dressage is always there for me. Dressage, at the end of the day, is always what I want to be doing. Dressage is just my THING, you know? 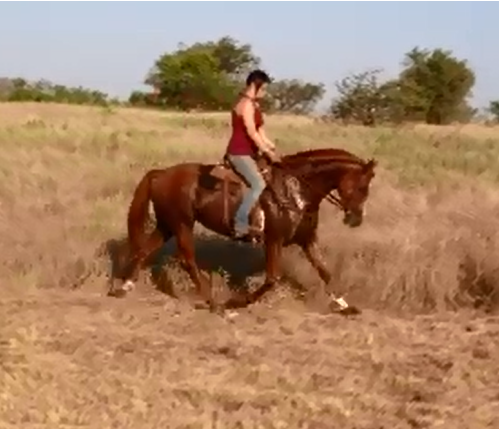 But again, back to dressage being somewhat of a snooze-fest. I always did eventing because while I loved dressage, it was almost... just not enough, you know? Going around in circles forever in an arena is just boring, no matter how intricate and beautiful it is. I want dressage, but I want *more.*

I'm starting to think I should give Working Equitation a try with O, just for fun. If you haven't ever heard of it, don't worry! I hadn't either until last year. Primarily dominated by Spanish breeds overseas, WE has a small but growing following here in the US. It is classically based, and like eventing, it has several different phases. This is so far beyond eventing though... in eventing, so long as you get over the jumps with no penalties, you're fine. But in WE, there's a lot more to it. There is a dressage phase to start, which fluctuates in difficulty depending on what level you are at. Then there is an Ease of Handling phase, where you have to complete a series of obstacles (bridges, gates, tight turns, maneuvering, etc), and you are judged on how intricately and precisely you execute these maneuvers (and you can make it crazy fancy). At the upper levels, it is all done at the canter and done one-handed. Now that's intense. And it gets even better! After the Ease of Handling phase, you have to do a Speed phase, which is basically the same course that you did before, only how you do against the clock, so there is a lot of galloping and tight turning. WAIT THERE'S MORE! In team competitions, you have a final phase where you work cattle. HOW COOL IS THAT?

Now that's something I could get behind. We might have to give that a try, because that's about the coolest thing I've ever heard of in my life.

So what is YOUR favorite thing to do on horseback? What are you addicted to that you just can't get enough of?