I feel like February is off to a much better start than January. It rained last Saturday on into Sunday, but not a whole lot, and there was just enough time to lunge on Saturday before the weather broke (and it broke just as we were finishing... we got a bit wet.) Things were plenty dry by Monday afternoon, and on Tuesday I went out into the neighbor's field to see if I had enough flat-ish space to measure out a 40m circle, which are called for in driven dressage tests. Sure enough, I *barely* had enough space, but I had enough! Part of the circle dips a bit low on one side, but oh well. Makes for uh, added impulsion? I'll just tell myself that it's good half halting practice, since she likes to go barreling down hills if you let her. I also marked the dead center of the circle, which means I can eye out a 20m circle if I want to use one, and also can accurately change directions. O is notoriously more difficult to ride in circles vs. straight lines (that inertia thing... she likes to drop her shoulder and dirtbike), but when driving on circles she is pretty straightforward. She is, as always, a no-nonsense kind of drive - if you give her a contact and push her out into it, she'll take it and move out, but she has to want to take it herself or else she'll fuss about things, get crooked, counterbend, etc. You give her the option to make that choice, and she'll always make it, but she has to make it of her own accord - you can't just take the reins up and say "ok mare, now you must be perfect and take a contact and off you go." You have to offer it, she has to consider the fairness of it, and then she'll nod her head and say, "Ok, it's time to get working." She is her own union boss, and she has to look the contract over first. If she deems it fair, she'll knuckle down and give you all you want. But if it isn't fair, she'll strike, and she'll fight and resist and raise some general Cain until you tell her, "Okay! Okay. What are the terms. I promise I won't demand anything before you're warmed up. I promise I won't give you a signal without a precursor signal first. I promise I won't make things abrupt. And I swear to god I won't pull backwards on these reins, not for a second." Then she'll nod, you'll sign all the papers, and she'll take a nice buttery contact, push into her breastcollar, and give you all she has. She is absolutely the most difficult, complicated critter I've ever met - and god knows I've been around a LOT of horses, really difficult horses, in my life - but she'll always work for you if you're fair and completely straightforward. She herself is ALWAYS straightforward with her likes and dislikes, and she expects me to be the same. She wants everything to be up front, all the time. I like that about her. 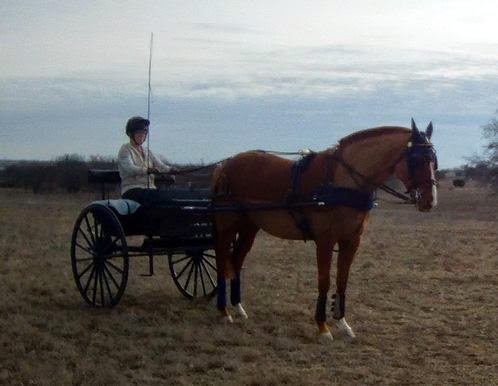 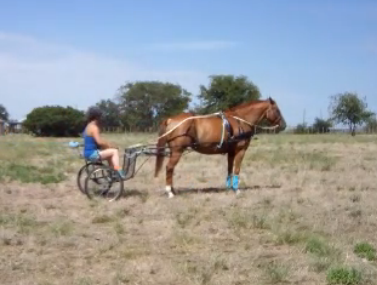 I also put her back in her eggbutt snaffle. The top above picture was from our last drive, when she was still in the liverpool, and I have to say the snaffle is just completely 100% her thing. She of course has been trying to tell me that all along, but my Hooman Ego thought, "nahhh, this liverpool is the SAME exact mouthpiece as the Happy Mouth, it's just a different flavor plastic, so there's no reason she shouldn't like it." Well, even when you set the liverpool on the snaffle setting, she still doesn't like it. She'll tolerate it for a little while, and then she just, you know, won't anymore. She tolerates it *more* than she does a metal bit, but far less than her Happy Mouth, which puts her in her Happy Place.

Zen face after her Tuesday drive, AKA phew thank god this idiot put me back in my favorite bit: 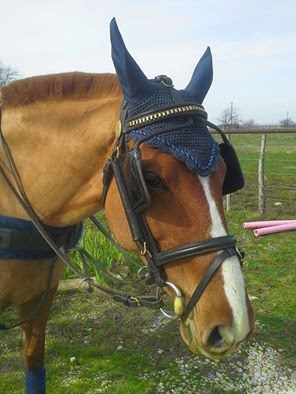 Driving really is just like dressage, only via out of body experience. You need to have a quiet, following seat in order to still the bouncing and rocking of a 2-wheel cart. If you don't sit quite right, the cart will put undo pressure on the horse's back, not to mention bounce and vibrate. If you sit just right and find the sweet spot of balance, and maintain it, the cart will self-balance and the shaft pressure on the horse's back will become very light - in my cart, maybe about 10lbs of weight on the saddle. That frees up the horse's back to move and swing. The horse also has to move forward and out to take a contact, just like in dressage - you can't just take the reins and force their head down into a frame. Or well, I suppose you can, but just like in ridden dressage, it's not correct and looks awful, not to mention makes for a very unhappy horse. The horse has to be soft and supple, bend in both directions, turn with fluidity and ease, half-halt, have impulsion and move forward, listen to transitions and balance in them - and that's just all beginner walk-trot stuff. Just like ridden dressage gets increasingly complicated, so does driven dressage - canterwork, collection, lengthenings and mediums (and possibly actual extensions), and even lateral movements are all called for in upper levels. Imagine watching a four in hand doing a shoulder-in as a team. That's some pretty cool stuff right there.

This isn't stuff I was taught... just stuff I've discovered along the way, stuff that makes sense. I can't wait for some further instruction - it will help clear up any muddles.

I've been trying to spend a little time every day organizing and prepping for upcoming things. I've put in time every day getting organized for show season (making lists of stuff I need and suppliers I'll need to order from, or places locally where I can get stuff), measuring out and budgeting for a winch and ramps, and contacting another driving trainer. I refuse to let another month slip by without getting more things organized and set for the upcoming show seeason. Determination plus organization - it makes me a force to be reckoned with.