Pax (yes, I think we're sticking with Pax!) is two weeks old today! She grew another 1/2" in the past week, which is quite a lot slower than the week before thank god. Slow down tot!

She is nothing but friendly and curious now - she wants to be with the people, pesting them and hanging out with them all the time. She wears her halter without fuss and leads well, picks up all 4 feet (even loose!), flysprays, gets brushed, had a booboo on her leg doctored with no fuss, and is generally a very good little tot. She is still a total pest and completely fresh - today she decided to buck and thrash around while I was holding her for her measurement. We made a half-hearted attempt to string test her, which was not remotely successful because a) she's too young and b) she's still over at the knee a bit. The string test said something like 14 hands which is definitely not going to be accurate. I have this hope that she'll stay on the small side so she can be my pairs horse with O - she came out perfectly matching! 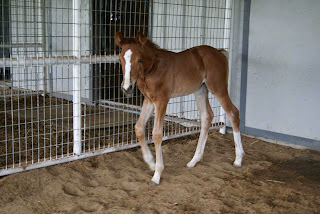 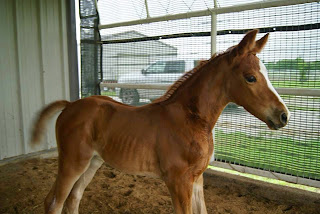 I'm pretty pleased with how she came out. She's still a bit over at the knee, but definitely straighter and stronger. When she goes out full time, and when her tendons catch up to her bones, she'll be straight legged. 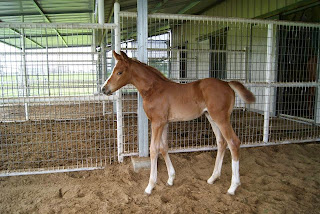 She's not Totilas but I think she's about the nicest thing P was genetically capable of producing. I am super pleased. The stallion improved all of the things I was hoping to improve, and she definitely seems to have inherited P's temperament and boldness, which is exactly what I was hoping for! She came out SO violently feral that I was worried for the first week... but I'm not worried any more!

For fun, here's a shot of Pax and a shot of baby O in roughly the same pose: 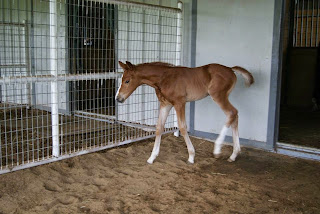 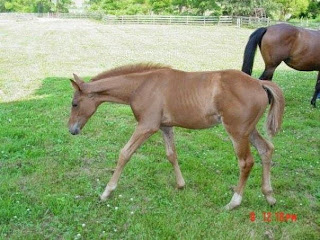 O was older there, although I'm not sure her exact age in that picture. I really like the way O is put together now as an adult, but I definitely don't think I would have bought her as a weanling if that's the picture I saw! Sometimes an ugly duckling turns into a swan!

Aside from Pax turning two weeks old, the other news is that we're right smack in the middle of Deathstorm Season. We've been hammered with storm after storm, and more rain than I've ever seen since I moved here. We put one of our couches out on the back porch to be recycled, and tonight it was literally FLOATING around the flooded backyard - a huge storm came in, and it rained so hard that everything became a huge lake. At least we're not in a drought anymore..?

Today there was a 4.0 earthquake here in the afternoon, which was then followed by a tornado outbreak. It sounds like a bad thriller movie but it's the truth. Where else can you literally get big earthquakes and devastating tornados IN THE SAME AFTERNOON? Come on down to Texas, it's loads of fun here in the spring...! 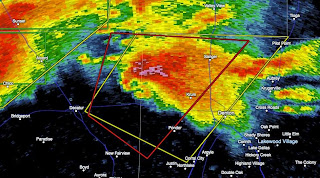 Yes, that would be a tornado heading RIGHT for the horses. They actually had TWO tornados there, back to back. Thankfully it missed L's place (barely, by only a few miles!), but others were not so lucky. Remember the lesson I had back with G about two months ago? Their ranch got hit hard and all buildings are damaged, with some buildings totally gone. All the horses and people survived, thankfully.
I feel particularly lucky myself because not only were my horses and my friends all spared, but I was spared too. The first tornado crossed over a tiny country road, one that I drive on literally every single day, at that exact time of day - except not for today, because I had late afternoon clients and had to leave the barn early. Had I been there at my regular time, I could have very well gotten caught up in that tornado.

I'm *quite* ready for spring to be over now, thanks very much. And we have SEVERAL more days of severe weather ahead of us....!