Normally I would not need dedicate an entire post to just the journey to get to a show, but it was kind of completely insane, so in order to not put everything into a GIANT chunk I will separate it out!

If you've been watching the news recently, you'll have noticed a lot of reports on the EPIC FLOODING that happened in southeast Texas this past weekend. Images of 100+ head of cattle stranded on the freeway, several drownings, dozens of total road closures, people stranded, water actively flowing over the roads.
Yeah. That was all EXACTLY where we were all weekend. EXACTLY the town we were in. 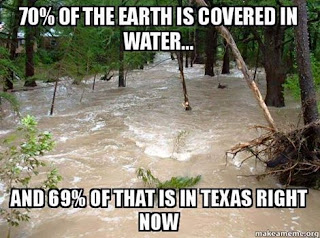 On Friday morning, the day before the show, the TD contacted all of us to say that while  nearby Brenham had gotten literally 17" of rain - no, seriously, they really did - the showgrounds had at that point only gotten 1". The show was on, so we got ready to roll. It was also raining up here in DFW, so I had to wait to finish washing my carriage and putting out hay for the home horses, as Future Hubs is allergic to it and can't do it himself. I was on the road with O by 12:30pm, and B2 got on the road at about 3pm. This will come into play later.

Well, over the course of the day I tailed pitch black rainclouds the WHOLE way there. Halfway down, I got a trailer flat, and had to pull over to change it. I seriously am cursed with trailer tires... I change them ALL the time. I had literally just gotten a new spare two days beforehand.


I was not feeling so good about the radar or the look of things. It looked as though it were raining heavily at the showgrounds. Immediately after passing through Navasota, I had to slow down and stare wide eyed at the trees and houses sprawled in broken pieces all over the place - a tornado had come through that area and shredded everything into toothpicks.

At some point, my nerves forced me to pull over into the nearest Discount Tire so that I could replace my spare. Since I clearly have fantastic luck with flats on my trailer, I decided that continuing on without a spare was the worst idea possible, so I went and replaced it. They told me it would be at least 30 minutes, which did not make me happy - O isn't a great traveler most of the time, and tends to fidget when the trailer isn't moving, as well as refuse to eat any of her hay for the entire journey. I don't know why she won't eat from a haybag parked in front of her nose for several super boring hours of just being in one spot forever but she won't. So, I stood in the trailer with her, stuffing cookies into her mouth, and waited for my spare to be replaced, which it eventually was. O was really quite good, and contented herself with just watching the mechanics work on cars. She's not afraid of things like heavy loud machinery, just interested in watching. 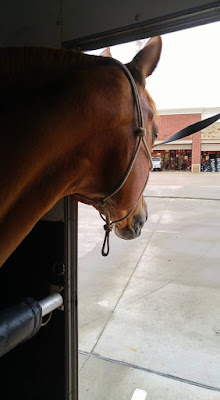 We continued on, following the black clouds. Rather amazingly, it did not ever rain on *me* while I was driving. I did, however, come across this right before I got to the showgrounds:

If you can't tell, that's water. That's ALL water. And some of it was flowing along at a fair pace too. I stopped the trailer while trying to decide what to do, then watched several tiny cars go through it without a problem, so I decided to go for it. Normally I am a pretty adamant turn-around-don't-drown advocate, but in this situation I was kind of stuck. I had nowhere to go. None of the little cars had any trouble, so my big heavy truck and trailer were likely to be all right. We made it through fine and the water wasn't deep. The road wasn't closed on my side, but they had erected a barricade on the other side of the road, which could not be seen from where I was. It was a pretty hairy few minutes. Don't do what I did.

I made it to the showgrounds without further incident, unloaded O and her buckets and haybag, then dropped the trailer and unloaded the carriage. We all had dinner and a competitor's meeting, and then I started to get texts from B2. She was stuck - the road was flooded. She turned around, and tried to go a different route - it was also flooded. Then she got a flat tire too, and was stuck on the side of the road. Roadside assistance came to help her thankfully, but I think she was strongly considering saying screw it and going back to Dallas.

While she was on her way, I went out to see the cones course. And oh man... the conditions were HORRIBLE. The showgrounds got at least 7" of rain that I know of that day alone, and it could have been more. Everything was literally underwater. Someone found an actual fish swimming through the dressage arena. A FISH. THERE IS PROOF. 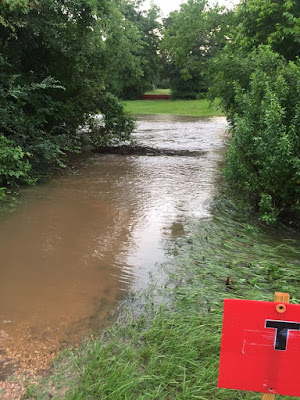 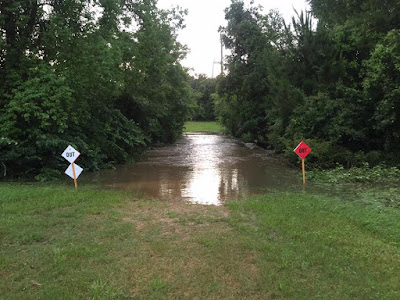 Well, that wasn't terribly promising. The cones course was also basically underwater, which made walking very mucky but did give some specatcular views on the tail of the storm: 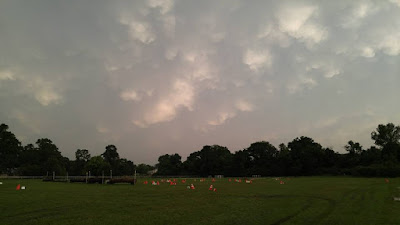 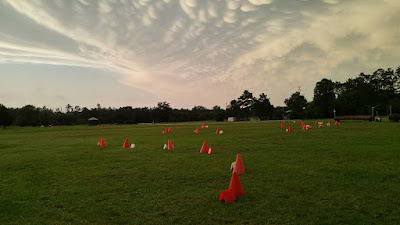 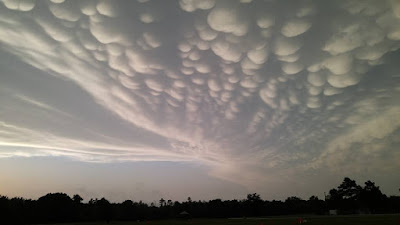 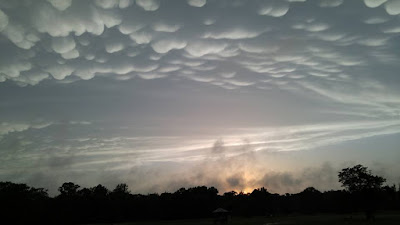 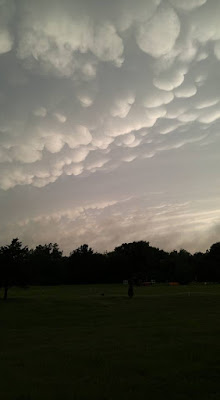 Lovely view, terrible everything else.

B2 eventually made it, and after making sure O was settled for the night, we got into my truck and headed back into Bellville. We were *supposed* to go to Sealy to where our hotel was, but we hadn't even gotten out of town yet when we were flagged down and turned around by a road crew. The road was closed, they said. Yes, flooded. To Sealy? Well, go that way and around.... for like an hour... and maybe there will be open roads somewhere. We weren't all that keen on that idea, so we went into Bellville and picked the only hotel we could find, a seedy Budget Inn. I've never been to Pine Hill before, so I didn't know about the *lovely* accommodations there. As The $900 Facebook Pony told us afterwards, "make sure you get checked for Ghonoherpasyphicrabs."


The next morning, we were up bright and early for the show.... stay tuned for the rest of the story soon!