July is steaming on and nearly over, and as usual, I have no time to write about anything. Bah! So many things have happened and I can't keep up with any of them. I'll just have to do my best, because as usual, I WANT to keep everything fully updated, but I just... don't... have.... time. Any time. My problem is that I get super behind on everything, start to write, realize how much I have to get down, and get discouraged and stop. That doesn't do anyone any good. I don't know what to do really. Maybe in August I should try to just write a blurb every single day even if it's nothing much? I'm not sure how to do this. Suggestions? I feel like I need to retrain myself to write again. I'm decidedly out of the habit.


Tuesday was my latest lesson with Louisa, and as usual it was challenging and informative. I put Dylan back in the double recently, as I felt I was having some trouble in the canter with my changes. He is so powerful and anticipates his changes, so sometimes my halt halts take an exhausting amount of strength to get through. In the double, he is light and the aids can be crystal clear. As I learn more about riding in the double, I can become a lot more isolating in all four of my reins.

We mostly did canterwork this lesson, which I needed. K and I recently realized that I just need one more score for All Breed Awards - which I stupidly did not sign up for yet - and that in order to not incur any more penalty money than I'm already going to have to pay, I need to get an August show in to try and secure my final Third level score. I mentioned this to Louisa and also that I might like to try 4-1 for the first time at the same show, just to see how it goes. It might be a terrible disaster but it might go ok. 4-1 has a line of three changes in a row, which are not technically tempis even though they kind of are. One on the quarterline, one on the centerline, one on the quarterline - with the same amount of strides between them if you can but not the end of life if you can't. It has no canter pirouettes, just a very collected canter on a 20m circle from quarterline to quarterline. Everything else is virtually the same at 3-3, just with a greater degree of everything required.

Louisa mentioned something to me that really stuck partway through the lesson. She told me "you have a horse that could knock everyone's socks off, so sit up there like a badass and own it." She's right... Dylan is an amazing horse. And pretending like I'm a badass even though I'm really not helps me to sit up there boldly and ride boldly. She explained to me that there are three phases of learning to ride. The first is learning to move with the horse - everyone starts out floppy and bouncing against the motion of the horse. The second is being able to ride without interfering with the horse - being able to go with the motion. The third is actively influencing the motion of the horse to improve it. I'm somewhere floating between these two states. Many years of riding green or sensitive horses has given me a really good ability to be sort of soft and supple, but it's very hard for me to be strong and hard while also staying soft and supple. When we were doing work with the changes, after several of them Dylan broke to the trot because I had dropped him right after the change. Louisa described it like being the mask on a sailing vessel. She said it's almost frustrating to him to feel like his mast - meaning me - is sort of swaying around up there, when what he really needs to be sharp and brilliant is for me to be strong and still. That made so much sense to me, as I know how much the balance of a sailing vessel is altered by something being top heavy or off kilter up high. Once I had these ideas in my head, everything got an awful lot better. I was able to really support him strongly and straight through every corner, and able to straighten him and execute clean and quiet changes. When he's not straight, or I'm not straight, the changes are garbage. He doesn't give any of them away freely - everything has to be perfect. When everything is not perfect, he crossfires at worst, and bounces really hard through them at best. When everything is perfect, you almost can't feel the changes. Louisa set out a cone, and made me work in counter canter through the short sides and then come across the diagonal and perform a change right at the cone. She also had me counter canter down the long side in shoulder fore (which meant to the rail), then straighten and perform the change. It's hard to get my head around the positioning sometimes, but once I get it - I get it, and it's great.

By the end of the lesson we were both really tired, and the quality of the work goes rapidly downhill when he's tired. He wants so badly to do his work, so when he's worn out he starts to speed up and rush through everything since he can't quite hold himself in that amount of collection anymore. It was hot and humid out, and the humidity in particular seems to really affect him, so instead of pushing any more we decided to do some walk work to round out the lesson. Louisa handed me the Equicube again, which is exhausting but super effective for me. It really forces me to engage my abs and in particular the group of muscles below my shoulderblades. Louisa wants my lower back to stay as supple as it is, but I need my shoulders to be much stronger and straighter without being tense. The cube helps me because it's super clear immediately if I'm holding the cube with my core, or holding it with my arms. She even stuck a whip behind my elbows at some point, which also made a big difference for me. It's sorting out these small things that will help make big changes in Dylan - and old habits are HARD to break!

Also, not related, having a shiny white horse is so amazingly pretty... 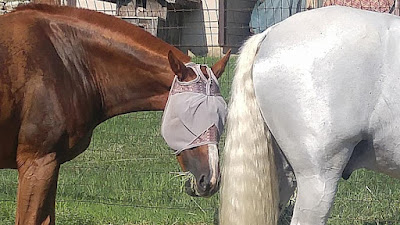 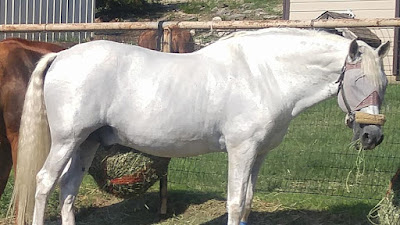 But actually that's almost never the daily reality. Usually he looks like this:

Email ThisBlogThis!Share to TwitterShare to FacebookShare to Pinterest
Labels: lesson