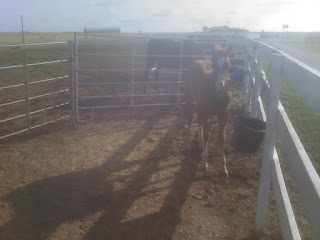 
Everyone begins their creep feeding process differently and at different times; at 3 months of age, the colt is starting a little bit later than usual but not actually late. Three months postpartum is around the time that milk production decreases, and foals start to rely more on solid foods rather than milk - although Elvis has of course been eating his mother's food and everything else he can get his mouth on for months now. It's just what babies do.

Having the colt around has all but completely ceased my work with Bay Girl. He is such an enormous pest that he gets into everything that I do and spends most of his time trying to chew on or jump on me. The problem with this is not the fact that he does this and gets a spanking when he misbehaves, but the fact that any sort of discipline I do scares Bay Girl to death. Any sort of fast movements, loud noises, or aggressive postures frighten her, and that is the absolute last thing I want. Oye, colts.

With weaning time moving ever closer (anywhere between 4-6 months, and I will guess it will be on the earlier side for Elvis), it is nearly time to make an offer on Bay Girl. If anyone wants to make any last minute donations, fire away! 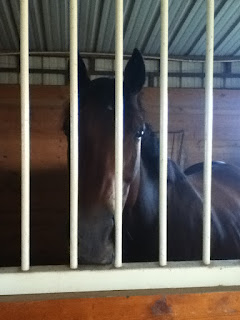