Sounds like an oxymoron doesn't it, a pony horse? Up until I moved to Texas, I probably would have laughed and agreed with you. Until I moved to Texas, I was completely immersed in the English horse world - all that weird Western stuff was completely foreign and strange to me. Nobody ties their English horses, they crosstie. Nobody ponies their horses, they don't have the means. Nobody uses rope halters, they're crude and funny looking. Or so I thought. Hell, I didn't even know how to tie a rope halter properly at all, much less even tie a rope properly!

That all changed when I was unceremoniously thrown into the Western world down here. I still don't get it, and I can't hardly sit in a Western saddle properly to save my life (even though I do it several times a day, several days a week), but there are some Western-esque things that I have embraced and assimilated into my training and my daily routines with my own horses. For example, Gogo couldn't tie to save her life - she crosstied, but only when she felt it was necessary. She was a religious halter breaker, and I can't tell you the number of halters she broke over the years from all the times she set back on me (yes, that is also a Texas term, "she set back" instead of "she pulled back"). Maybe I just got tired of it, but I have made it a point that both Pangea and Imogen learn to hard tie. Thankfully, they are both good girls, and I can now leave them alone and tied for long periods of time and know that no matter what, they aren't going anywhere. I don't think I really appreciated what a huge help it is to have horses that tie until I was around a lot of horses that all tie without problems. (All the Western horses around here do, and it is so EASY!) I also regularly use rope halters now, which was weird to me at first. Pangea has a leather halter, and I do school her on the ground with a chain, but Imogen? The very idea of putting a chain on her makes me cringe - I can't imagine how badly she'd react to that. I needed something with control that didn't come with the additional risk of scaring her half to death. Enter rope halter with extra nose knots - voila! It isn't enough to really stop Pangea when she gets bargy, but it does the trick with Imogen. The one I have for her is a wee bit too big, so she does need a new one, but it is something. And she will have a nice leather halter for shows of course... but not for schooling at home!

The last thing I wanted to make sure that both girls knew how to do was pony. In all honesty, I've never ponied horses before in my life. It's just not something that English people DO that often. Granted, it is pretty hard to teach horses to pony when you don't have a horn on your saddle, but still. I have a particular checklist of things for Imogen that she needs to solidly know how to do before I ever get on her, which is as follows:

1) Solid base of groundwork
2) Lunging (with tack)
3) Bridling, saddling, wearing of general tack/boots/clothes
4) Ground driving - which we haven't yet covered
5) Ponying

The thought is this: we may use Pangea as a buffer for when I first get on Imogen. Sometimes with a hot, scooty horse, having a buddy there is not only calming, it provides a stop for a horse that tries to rush, scoot, or otherwise get anxious. I don't anticipate that she will, if I make sure everything is all properly squared away, but it is a handy thing for a just-in-case moment. The other reason for teaching her to pony is that I have an awesome tool in Pangea - she is a go anywhere, do anything ATV, and will do just about anything that you tell her to under saddle. Scale rocky hillsides, plow through deep water, pick her way through thick brush, you name it! Being able to pony Imogen off of her when we go out for trail rides is going to be a huge pay-off for me - she'll be exposed to TONS of stuff, and will have a calm and nonchalant buddy there with her the entire time to show her that things aren't scary. It is win-win for everybody involved - Pangea gets out to stretch her legs, and Imogen learns. And I get to spend time with my two awesome girls, of course!

Imogen is thankfully feeling much better after her little snotty nose reaction to her Strangles vaccine last Saturday, so on Tuesday I put her back to work on the lunge line with a full set of tack and bridle on. I actually tried Gogo's famous blue Happy Mouth mullen mouth bit on her, and she LOVED it compared to the other snaffle! I have a third snaffle I might try on her, a very thin double jointed loose ring, but she was very happy with the Happy Mouth. It's a good baby starting bit, so maybe we'll stick it it for now! She worked great on the lunge, and I even let the stirrups down on the jump saddle so they could flap around and smack into her sides while she moved. She didn't care at all. I think at this point we can safely say that these bases are covered - once we start ground driving, she will be ready to start under saddle.

It was also high time to teach her to pony! Thankfully, teaching horse to pony is super easy, so long as the pony horse is of a compatible personality, and they understand general things like what pressure on their halter means. Aside from being a bit surprised when I swung up into Pangea's saddle - she's never seen a human on a horse before, after all! - she took the whole thing in stride like a champ. By the end, we were walking, trotting, and stopping together with no issues. I think we can also check this off our list - ponying is easy! 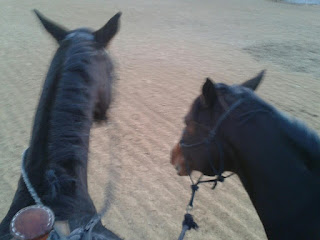 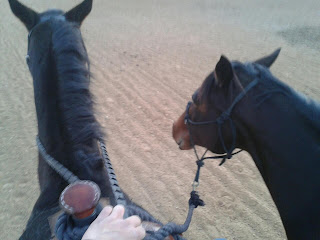 I'd also like to point out that I had every intention of wearing gloves.... I put them out and everything. I just, you know... totally forgot to put them on. Thankfully there were not any rope burned hands in the process!

The girls move to the new place on Sunday, and then it will be time to recruit some helpers for teaching her to ground drive. We've not covered that yet simply because I really do need a handler to help lead her while she learns how to do it, and I haven't had anyone here to help me. After that is squared away.... we back her!