There is truly never a dull moment in the life of owning two kooky mares.

This weekend was the scheduled move for the girls - basically they were going from one side of town to the other, to a new and extremely gorgeous private facility. My plan was this: load the girls on Saturday, take them both to work, swim P, and then after work pony Imogen off of P and take them both out on the trails for Immy's first outdoor work experience. We have 6000 acres behind my workplace to ride on, so we have plenty of trails to choose from! I was very excited for the opportunity - I knew in my heart she'd be excellent out there.

Unfortunately, we had to GET there first. Part of that included loading the mares and trailering them to the property. With handy-dandy second lunge line in place, I started to load Imogen in the same way that I have been - lunge line running from her up to the side door and out back to me - and once again, it *almost* worked the first time. Remember how the first lunge line broke not once, not twice, but THREE times? The second lunge line must have had a talk with it, because it ALSO broke clean in HALF partway through the loading process. It isn't exactly like she was pulling back super hard or anything... the lunge line just straight up failed. Of course, we all know what happened then - cue Imogen galloping away back to her pen with a long piece of lunge line trailing, AGAIN. Now, of course, we have a full blown issue on our hands. Imogen now thinks that if she backs rapidly out of the trailer, the lunge line will break and she can run away. It isn't her fault - I don't blame her, I'd do the same - and it honestly isn't my fault either... I fully blame my stupid equipment for creating this problem!! Luckily, she was caught easily again, and with lunge line safely knotted several times for maximum security, I managed to once again get her safely loaded and on our way (this time thankfully on time).

When I brought P into the pool barn for her AquaTread session, I made a very unpleasant discovery.... these two are HOPELESSLY attached to one another. Like, really badly. No, really. See for yourself.

The other horse in the video is a QH racehorse stallion that we have in for rehab right now. He obviously didn't care about the shrieking women in his presence, thank god.

Seriously though. I think these two need some remedial time apart. This is ridiculous.

It was around this time that I had the brilliant idea to also put Imogen in the pool. I had extra hands around the farm, so I decided, why not? Why not today? But would it go well? Both my other horses have walked right in the first time, which is NOT a common thing for them to do. The pool is a scary, gurgling, sloshy monster to most horses... so what would Imogen do?

Will you believe me if I told you that she WALKED IN BY HERSELF? Yeah, I wouldn't either... but it is 100% true!

Now, it isn't go completely smoothly. Once the water was a little over her knees, she stopped, and the wheels started visibly turning in her head. "Hm, this water is getting deep," she seemed to think aloud. "I think I am going to need to swim. Well, I need some propulsion to get myself underway, right?" And that's exactly what she decided to do - launch. I of course got soaked in the process, and she rammed into the chestrope and started thrashing. I see a lot of them do that, so I knew she'd be fine once she put her feet down, but she spent a minute or two trying to swim instead of realizing she could just put her feet down and walk. Smart girl that she is, it didn't take her long to figure out! 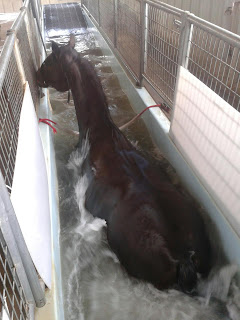 She was very tired by the end of it. Can't blame her there... she's not exactly in shape yet! Although I do have to say, she is looking much less pendulous in the belly area already, don't you think? 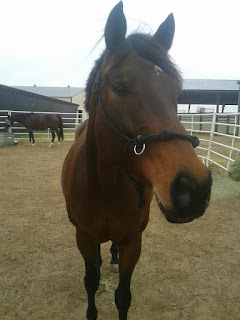 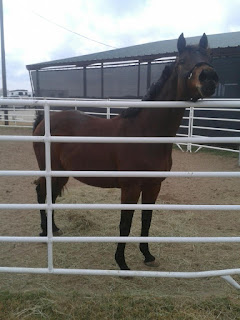 With both girls dried and finished, I put them back in their pen and let them rest until I clocked out just before the sun went down. Once the workday was complete, I tacked up P, put on my helmet, and quickly picked their feet before setting out. It was at this time that, with Imogen's feet cleaner than ever, I noticed a spot in her lateral quarter on her LF that has a touch of WLD. It had only looked like a chip before that simply needed to grow out, but with the foot super clean, it was clear that there was more to it than I had originally thought. At this point, I did the dumbest thing I could have possibly done - I poked at it with my hoofpick to see how extensive it was.

Yeah. That tissue is sensitive, you know? She immediately freaked, slammed her foot down right on top of my foot, set back, and broke her lead rope. I can't exactly blame her for that one... clearly it hurt. Unfortunately for me, the force with which she stuck me was enough to break my foot. Yes, break it. First metatarsal on my left foot. It is broken.

Don't be to worried about me though... despite the fact that I knew right away that it was broken, I decided that it wasn't bad enough to forgo my ride. Maybe I am an idiot, but those trails were calling my name!

I wasn't disappointed either - both girls were AMAZING out there. We even trotted a long stretch with nary a problem. We weaved around trees, bushwhacked through cockle burrs, and even walked over a very large log - her very first obstacle! She didn't bat an eye, all thanks to Pangea's devil-may-care attitude about life. P isn't exactly a quiet horse - in fact she can be quite hot - but she is very confident and truthfully doesn't care about ANYTHING we come across on the trail. Because she didn't care, Imogen didn't care. She just took it all in stride. 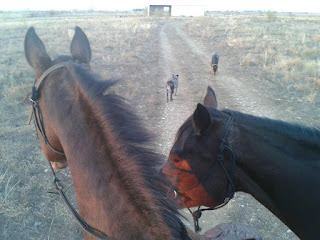 My foot is very unhappy, but I will live. I still have to work, so all I can really do is try and elevate it and ice it whenever I have the chance. Such is the life of a horse person, I suppose... we work our butts off in a dangerous profession, but don't get paid enough for quality health insurance or workman's comp should something happen to us. So, we continue to work even when we are injured, because what else can we do?

Today, my beautiful ladies both had very thorough baths, and both were very well behaved for it - Immy even let me wash her long and scraggly forelock for the first time ever! She gave me some horrible trouble loading on the trailer, but we got it done without any more lead ropes breaking, thank god! There was an awful lot of her jumping onto the ramp on one side and jumping off the other, back and forth in order to avoid actually going in. Finally, she tired of that, and jumped right in. We'll get there eventually...

More pics of the new facility tomorrow! The girls are in outside stalls for the night, and will be out with the pasture horses for the first time in the morning. Once they acclimate to their new surroundings, they'll be turned out 24/7, and I can't wait. The facility is gorgeous and the people are lovely.... what more can you ask for?