So, to tell you something you didn't know... it's really hot in Texas in the summertime.
Seriously, I think I might actually physically be on fire right now. 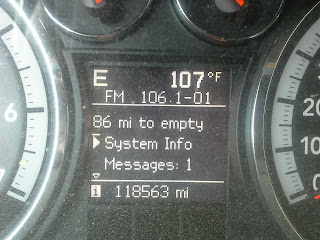 My truck, for whatever reason, religiously reads temps as 5 degrees cooler than they actually are outside. That would make it 112F outside. And that's WITHOUT the heat index... I don't even want to know how hot THAT is.

For obvious reasons at this time of year, if you want to ride at all then you have to get your butt up and do it as early as possible. 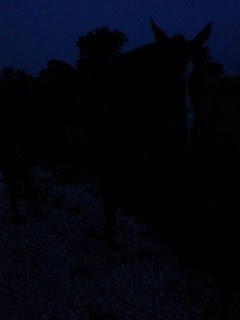 Yes, that would be considered a "pre-dawn" ride. Three days in a row we had to do this, due to me needing to be somewhere by 8am.... so we were on by 6:15. We spent one day hacking down the road (and playing on the barrels!), another out on the trails, and a third doing gallop sessions. Our gallop sessions are hardly a workout for either of the horses, but it gets them out to stretch their legs.

It's really all we even had time for that day, since I had to scooty my booty to work right after. It's not even enough to get them breathing hard, but she certainly doesn't need to be *any* fitter than she already is for the kind of work she'll be doing. The focus for her right now needs to be on increasing training and maintaining fitness, not the other way around. Obviously that will change in due course, but not right now.

Yesterday, we headed back to WD for some dressage work. O was kind of just an all-over hot mess last week due to being in heat (among other things), so I was keen to get some actual productive work done. She did not disappoint - after a long walk hack to warm up, we went into the covered arena and did some simple walk-trot work, focusing mostly on taking a light contact and keeping a steady rhythm. She was extremely reasonable and steady, and was completely agreeable about more or less taking a contact and being steady with it. Even when she wasn't quite on contact, she kept herself slightly above the bit instead of behind it. I'll take that any day. She listened well for transitions, without much more than a light halt-halt on my part (this is huge!!), and even stretched in the walk. She really actually stretched!
I'm glad I did away with neck stretcher and martingale. I definitely needed it for the interim that I was using it, but it's time to give her some more freedom, now that I know she isn't going to try and actively kill me the entire ride or try to break my nose with her swinging head. Priorities, you know. 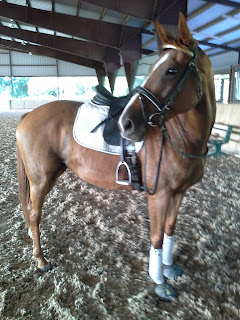 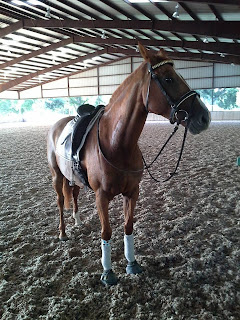 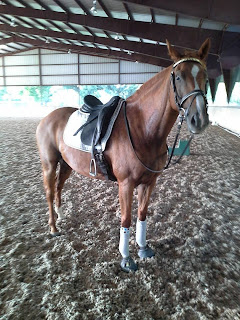 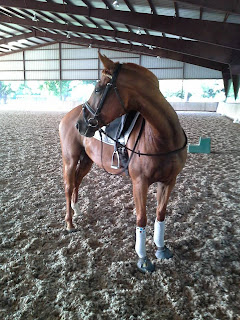 She was REALLY concerned about her friend being in the other arena, but she didn't act on it, just turned her head and popped her eyeballs out while I was taking photos. When we were working, she didn't do much more than look at him a few times and then get back to work. And for the first time EVER, when we were out hacking, her buddy trotted away from her and SHE DIDN'T FREAK OUT. No more dancing Mexican horse! She wasn't happy about it, but she kept on walking on a long rein and didn't do anything else except try once to break to the trot once he fully vanished (and she came back in a stride or two, so it wasn't a big deal). YES.

I also managed to repair the Deltas with a lot of angry words and glue/cable ties. And if you were curious about the boot/leg setup...

First, apply long cottony knee-high socks over the hoof and pull high
Second, apply no-rub pastern wraps over the socks
Third, beat boots on with much cursing and swearing
Four, pull socks down
Five, wrap legs with polos of choice
Six, pull socks back up over the polos
Seven, ride, and express joy at how happy horse is in boots and how it's all worth it to keep them from rubbing her
Eight, dismount, wail in horror about the amount of goathead stickers and cactus thorns that are now in the socks that will shortly be embedded in your fingers
Nine, pick out all stickers, bleed profusely
Ten, pull off boots, then pastern wraps, then socks, then polos, and have a drink

It's an enormously huge pain in my butt. It's worth it - totally worth it, for her health and the continuing improvement of her hoof - but it's pretty obvious why people just go right to shoes. BOOTS ARE A HUGE PAIN. 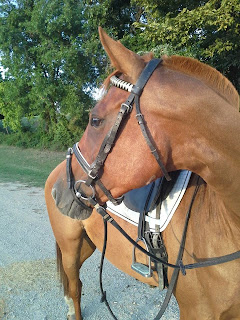 Nice schooling bridle, yeah? One of my friends sent it to me for super cheap - I had been hoping to score a cheapo one so I wouldn't have to keep switching bits every five seconds. It's a bit hard to tell, but the browband is a ribbon one she custom made herself - it's black with sparkly gold. LOVE it. The bit is one I hadn't bothered to try before, but she LOVED IT - just a simple thick three piece loose ring, nothing fancy. I don't think I had ever even really used it before now, it was just one of those random finds in my trailer... can't remember where I got it or why. Either way, glad I tried it!

As an aside, nobody can believe that she's actually only 15.1. She takes up my leg well, moves like a big horse, and has a big horse presence. I always think I look huge on her, but in reality, I really kind of don't: 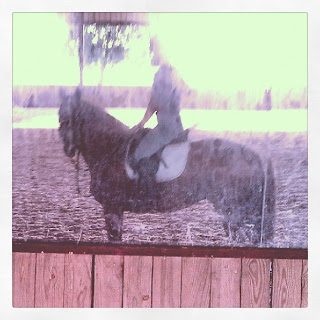 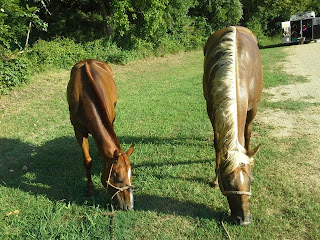 Granted, she's slightly downhill from the other horse, but he's a solid 16.3. She's a shrimp!