Well, it's that time already.... time for O to come back into heat again. BAH.

Gogo was an exception to the annoying in-heat mare rule. Every time she'd come into heat, she listened better under saddle, was more malleable and responsive, and did exceptionally well at shows (we joked that we ought to give her Estrumate before every show just to make sure she'd come in and behave herself!). It was like she was a little less self-assured, so she'd look to me more as a leader. It was AWESOME.

O is the total opposite of that. When she comes in, she'd rather have nothing to do with me. Normally, she's a total peach, very interactive and loving, a total attention hog and a snuggler who comes right to you in the pasture. When she's in heat, the first sign of it is not wanting to be caught. Today I caught her snuggling over the fence with one of her Blonde Boyfriends, and then when I went to go groom her, she left. Come on, we're just grooming, you can do it while we're eating dinner, we don't have to work today! She eventually gave in, and I inspected a nice big bite mark on her butt which no doubt was from her very studdish Blonde Boyfriend. Yep.... she's coming in again.

She gets super distractable and flighty when she's in heat. She can't focus on eating, sleeping, doing regular things... she's just constantly on the search for another horse to flirt with. She is balky and sticky and cranky under saddle. She wants next to nothing to do with me and leaves whenever I show up. And it's hard to say whether or not there was a serious correlation, but that horrible terrible no good very bad jump school we had? Right during her peak cycle, when she was at her most distractable and crappy-feeling. Every other jump school? TOTALLY different horse. She's 100% hit and miss under saddle on the flat either way when she's in - sometimes she's OUTRAGEOUSLY HORRIBLE, sometimes she's ok, but she's definitely a wild animal when she's cycling. She's already on raspberry leaves and magnesium... chaste berry is probably worth a try too.

There is another option which I am definitely interested in trying - marbling. I'm really NOT a fan of giving supplemental hormones unless there is really a good reason for it - like if she was honestly trying to kill herself or kill me. (Let's face it, hormones are super powerful and super scary! I'm not keen to mess with you, Mother Nature!) The marbling procedure involves placing a specially sized glass marble into the mare's uterus, which tricks her into thinking she is pregnant. This procedure can be somewhat hit and miss... some people swear by it, other people have had their mares expel the marble or come right back into heat anyway. I like this idea the most because a) it is cost effective, b) it is reversible, c) it doesn't need to be given daily/monthly like oral or injectable hormones do, and d) the mare produces the necessary progesterone by herself instead of being artificially given them.

I have a call in to my vet to discuss some options. Either way, something needs to be done.... dealing with In-Heat Demon Child isn't a lot of fun. Any success stories out there with marbling versus depo/Regumate/etc? 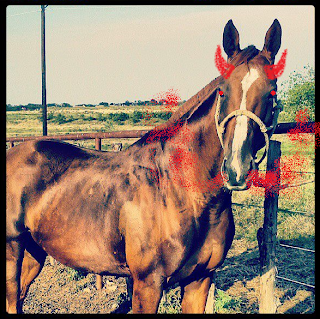 I decided after all was said and done that she should have a little two-week vacation after her awesome schooling last weekend, so she has been relaxing and enjoying herself this week. She's been working super hard and doing very well, and I will be gone all of next week anyway for my own vacation to Michigan (excited!), so I figured she could have a little down time herself. I think it's important to let them have breaks like that... it's something I never did with Gogo, and I regret it now. She won't be ready for the little schooling show at WD at the end of the month, but maybe we can shoot for the one at Curragh in early Sept. I'm going through my list of schooling shows today and making some more solid plans!


EDITED TO ADD: Here is the update list of hopeful shows for the year! Ones in bold are a definite yes (if all goes well, of course), ones that are just in italics are maybes.


Looking ahead at these potential schooling shows makes me realize how NOT PREPARED I am for going back in the show ring! The last time I ever turned down a proper centerline was at the AECs in 2009. Ya'll, that is FIVE YEARS AGO. I don't even know if half my show tack is still around, and I don't even have the slightest idea when any of these shows open and close. There is SO much to do!!