.... yet somehow I managed to man up and go for a ride both today and yesterday. Take that, winter!

O was supposed to do a 10 mile conditioning ride yesterday, but when I arrived at the barn my truck said it was 24 degrees. The wind was howling at a sustained 25-30mph, and the windchill reading was hovering around 10 degrees. At first, I thought, "no way am I getting on." As I was feeding, I realized exactly how sassy the girls were being in the cold weather. They were also being sassy about their hay... they are getting increasingly spoiled about it. When both of them got here, they were quick to hoover up every stem of the delicious tim/orchard/alf mix that I feed - both of them were transitioning from crappy coastal, and Tre especially was only being fed meals, so EVERYTHING in sight got inhaled. As they realized their hay was going to be in front of them 24/7, and that they never had to fret about being without, they started to get increasingly haughty about it. "Oh, this stuff? You put this stuff out this MORNING. Don't you know it's 5pm already? It's been sitting out in the air all day. It's NO GOOD ANYMORE. We won't touch it." Yesterday, they apparently decided that the stuff that S had filled their bags up with that morning was NO GOOD (it's the same hay  as always guys....), and stood around in their shed all day moping about it. O ate fresh hay when offered, and her grainfoods as well, but then stood glaring at me when presented with the several-hours-old hay (again, from the same bale at the fresh stuff I had just given her).

I took it as a reason to get my butt in the saddle. You want to be a hay snob? Fine. We're going for a workout. I will MAKE YOU HUNGRY.

I canned the idea of the conditioning ride (what am I, a polar bear? Screw that) and decided that this day would be our glorious return to dressage. Mind you, I haven't had a dressage saddle on this mare since, oh I dunno... October. I haven't ridden the mare in a bit in that amount of time either. And it was about 10 degrees out with howling winds and grey skies. Surely this won't be a bad idea...

I knew it was going to be exciting when I pulled her blankets and she was already shivering. I tried to put her pads on and quarter sheet, but they all blew off of her before I could walk back over with the saddle. Twice. She was pretty cold by the time I got on, and I couldn't feel my hands.

Understandably, she was terrible for the first 30 or so minutes of the ride.

But, once the bolting stopped, once she had quit running herself into the fence out of control, once she had stopped flinging herself around like a maniac, she settled. She was lighter in the contact than I would have liked, but she took one (mostly). She started listening and started paying attention to transitions. We even did a few turns on the haunches (more or less), and a few head-to-wall leg yields. I hadn't actually ever schooled these before with her, I just started maneuvering her around and realized that she was getting the idea. We ended with some quiet walk-trot stretchy work and some obedient halts, and I called it good with that. 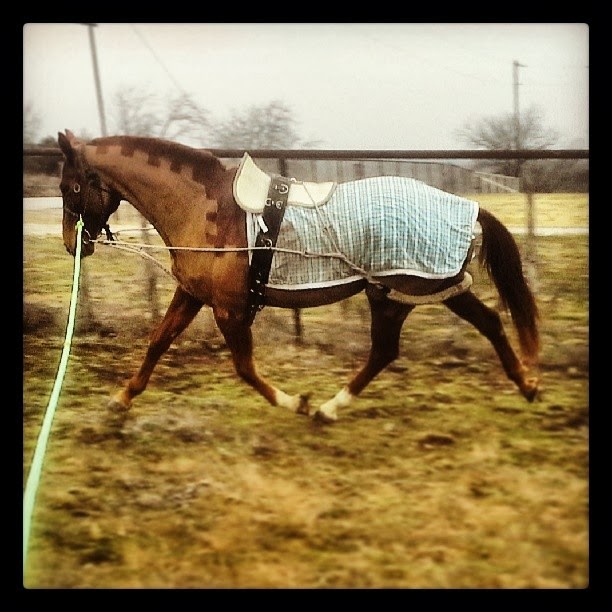 Slight counterbend. Only one way to fix that!

That drive to get on no matter what *almost* continued through to today. I had every intention of getting on for another dressage ride - I really WANTED to get on! Unfortunately the weather had other ideas, and snow was blowing and falling hard all morning. Yes, you heard me.... snow. 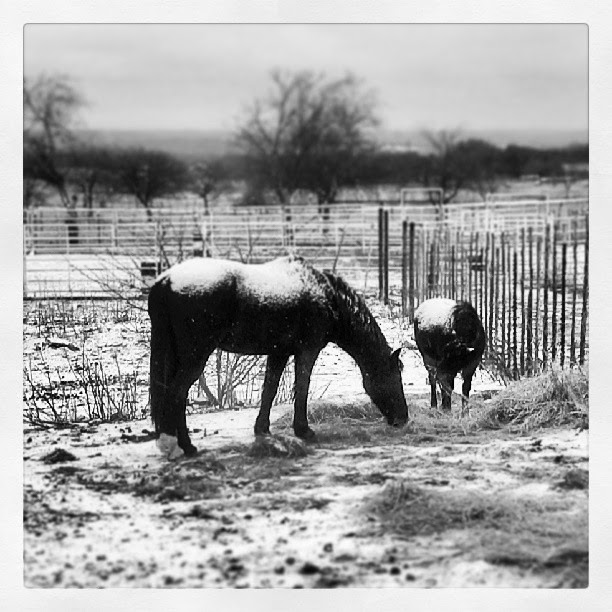 Ponies down the road.... fluffed up and wearing their nice frosted coats.

Luckily, the snow stayed away from the barn for the most part, but I couldn't get around the fact that the wind chill was hovering somewhere between -4 and -2 degrees, with actual temps in the low teens. I had been outside working all morning, and was absolutely frozen when I got to the barn. Poor O had two heavyweight blankets on (yes, two!!) and was STILL shivering underneath them. It was just cruel to take her blankets off and make her get even colder (and subsequently tighter and hotter) all for the sake of a ride. I added a third heavy blanket and went looking for my neck rugs - of course when I found them, I rediscovered that Gogo had more or less destroyed both of them (I had long since forgotten about them both). Poor mare! But, with tons of hay, a shed, three heavies and a friend to snuggle with, I think she'll survive.

I did manage to hop on for a little 'bareback' toodle around for about 15 minutes - we were both freezing, so we needed to get out blood pumping! I tied her lead rope onto her halter, jumped on top of all three blankets, and off we went. We patterned on the barrels for a bit and called it quits after we had moved enough to both stop shivering. She really likes the barrels in the way she really like endurance (and jumping as well) - the idea is REALLY simple and doesn't take a ton of mental finesse and focus on her part. You go fast, and you turn, and that's about the extent of it. I think once she has a better understanding of dressage, she'll get into it in the same way, but it is much harder for her to deal with mentally because there is a lot going on, and none of it has anything to do with going fast. 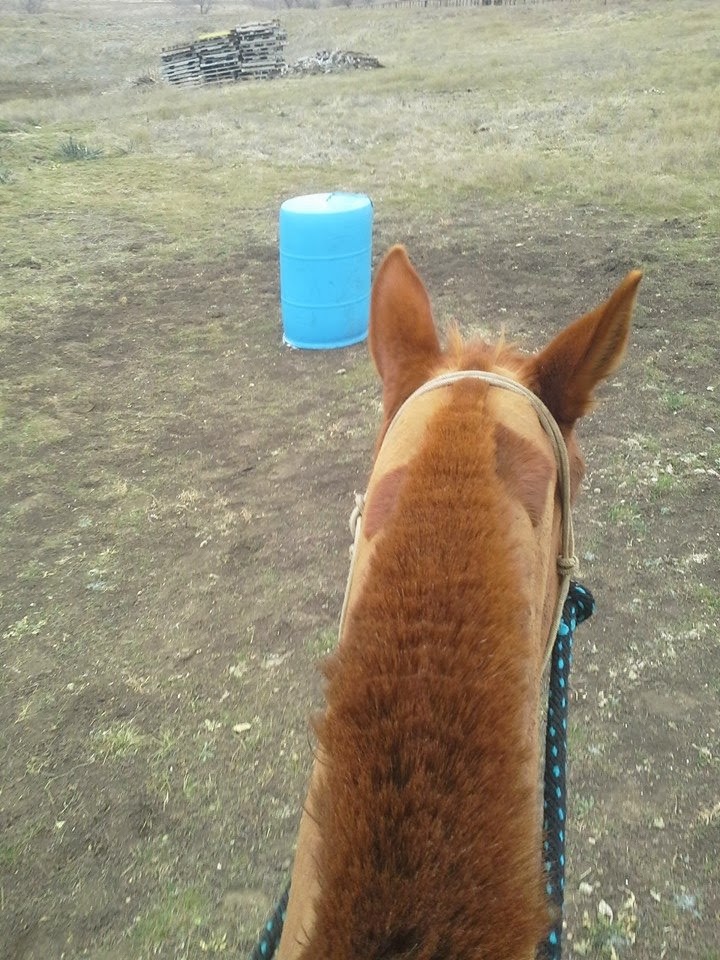 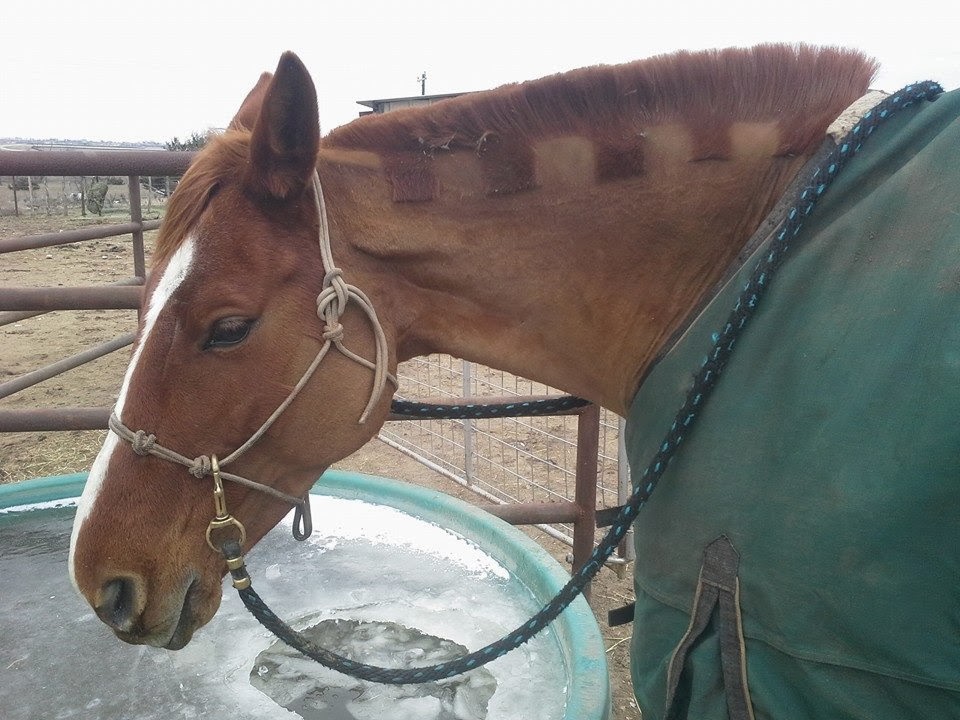 Getting a nice long drink after she was done. A REALLY long, long drink! It's so cold that the ice freezes up quickly - the horses have to keep their troughs unfrozen by going back to them often. Mine understand the concept, but I worry about them. We have no tank heaters - there's not a reason to have them usually - not to mention the fact that the tanks all have fish and we don't want to fry them. Therefore, breaking ice it is.

Hopefully it will warm up this weekend....