Scratch that title. How about, "O runs some barrels... and wins some money!"

(But before I get into that story, I wanted to make sure everyone is clear on what happened with Immy and P. Immy did go with P to the lessee's place at first, but she ran the lessee's other mare through the fence repeatedly, so that wasn't going to work. She ended up at a different place doing babysitter/pasture ornament duty, and is fine, fat, and happy at her new forever home where she never had to be ridden or do anything more complicated than get handfuls of cookies. She's doing just fine and they love her. So don't worry!)

Anyway! On Monday, after I brought P back, S and I went for a nice little walk hack and talked about what we were going to do on Tuesday. There was a barrel race at Glen Rose that she wanted to go to, so I decided to tag along and do some exhibitions for fun. As it turns out when we got there on Tuesday, she entered me in it!! I am obviously NOT a barrel racer and neither is O, so mostly I just flung my hands up and went sure, what the hell, why not!

Our exhibitions went decently - I trotted a few, I cantered a few. S gave me some tips on how to stop riding like, well, you know... an English rider... and we went on our way. (It still sounds weird to me to tell people I ride English down here... people down here don't know what dressage or eventing is, so I either tell them I ride English or that I jump. Then they sort of get it.) Mostly she told me to just let go of her head, to trust her to turn, to hang on and to just go as fast as possible. Yep, sounds about right.... I tweaked a few things in our last exhibition and it went pretty well. Much to my TOTAL surprise, O has the barrel pattern completely figured out. I would hustle up to the barrel, get to it, sit up and settle into my seat, and the mare whipped around each one by herself. I didn't have to turn her, just put my outside leg on to support her and around she went by herself. Which admittedly is exactly what you really want, versus all the people you see doing this cringe-worthy cranking..... yikes.

As a small aside, it's a well known fact that there's a LOT of really, REALLY bad riding going on at barrel races... it's a sport where you don't need a trainer, much money, or any real equitation to actually be able to sort of crank around and get the job done, and it has some sort of weird glitzy cowgirl allure to it.... so you get a lot of really Bad Riding going on. There is a VERY obvious difference between people that clearly know what they are doing, and people that should seriously take up another hobby... maybe like underwater basket weaving, or taking care of pet rocks.

ANYWAY. Before I knew it, it was time for us to head on in. Remember, this mare has only sort-of cantered the pattern a few times.... she's no pro. I'm no pro either. But hey, why not! Down the alleyway we went.

And actually, we did pretty well all things considered! I took a really bad approach to the first barrel, and sort of cantered and weaved around trying to figure out exactly where I wanted to place myself. I failed at that and ended up burying her at the first barrel, and she just about trotted around it. We were not exactly hauling some ass at that point. However, I got us more or less unstuck on the backside and pushed her on. From there on out, she was MOVING - she zoomed to the second barrel and whipped right around it, zoomed to the third and whipped right around it too, and FLEW all the way home. The girl was HAULING ASS. And it was FUN!

Our time was a 20.29. We were the slowest ones there by several seconds, and were in LAST place. Not surprising! But somehow, even though we were in dead last, there were few enough people there (around 30-4) that we were 3rd in the 4D. Don't ask me to explain the divisions, I do not remotely understand how it works. But I got a check for $31! Not bad! And considering that I totally flailed and wasted a ton of time around the first barrel (and really, we were trotting), our time would have been WAY faster had we just gone about at fast around it as we did around the other two.

So there you have it. My warmblood does pretty much everything ever.

As for old Pmare, she is doing well. She had a bath today when it finally warmed up enough to allow for it, and while she still looks sort of dull and grungy, she already looks way better just from eating good food for a few days. 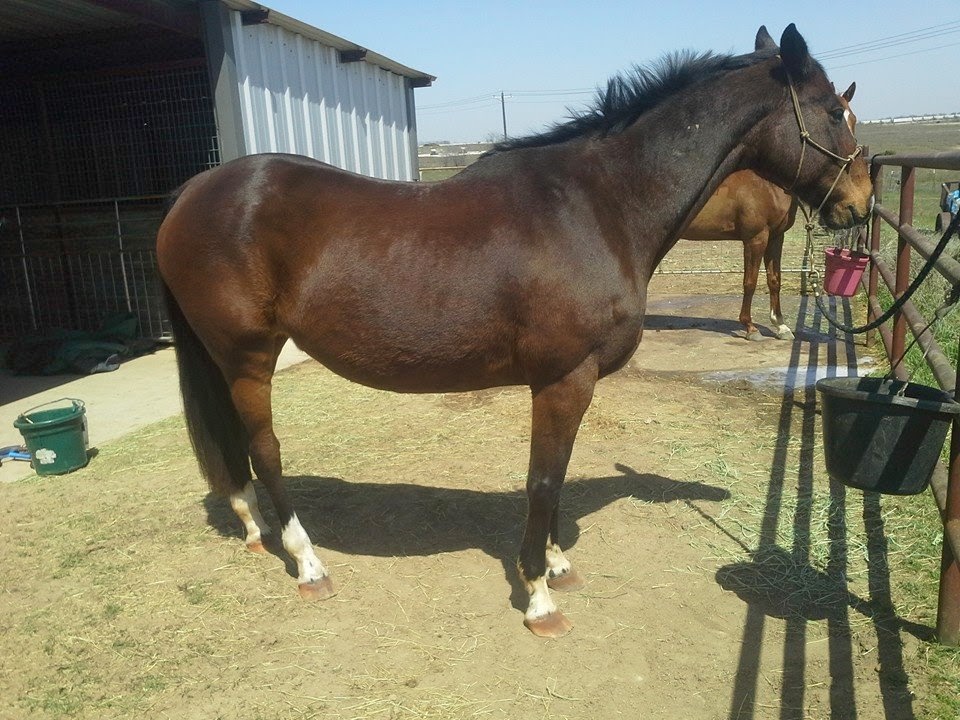 Not impressed with the bathing, the grooming, or the paparazzi. "Lady, leave me alone and feed me already will you?" Definitely still the same crusty old bat as she always is.

The mares got into an EPIC battle on Tuesday. I think what happened is that O used to be on the bottom rung when she first came to join the herd, and Immy regularly beat the crap out of her. Then the girls left, and she lived alone for awhile. When Tre came, O found herself on the top of the totem pole for the first time, although Tre did regularly try to take over. I think maybe she thought when P came back that she could try and pull a fast one over on the old mare and make herself the head honcho, but nobody knocks old Pmare off the top rung. O definitely started it - she turned her butt to P and backed into her, hopping up like she was threatening to kick. P of course turned her butt right around and backed right into O, and the hooves started flying. They threw themselves at each other like sumo wrestlers, screaming and double barreling - I almost thought their blankets had hooked at one point, they were mashed together so tightly for so long. Usually I let them sort their differences out, but this fight got out of hand quickly, and in a flash O had knocked P clean off her feet. P got up, hurled herself into O, and knocked HER clean off her feet as well, then jumped on her and started savaging O's neck with her teeth. I was making my way over there to break up the fight when they both stood up, reared and struck at each other, and P got one final chomp in. Then they quit and went back to grazing peacefully side by side. O has a number of scrapes on both hind legs, and P had several swollen bitemarks on her neck, but other than that they are both fine. O is now humbly following P all over the place like a little lost puppydog. 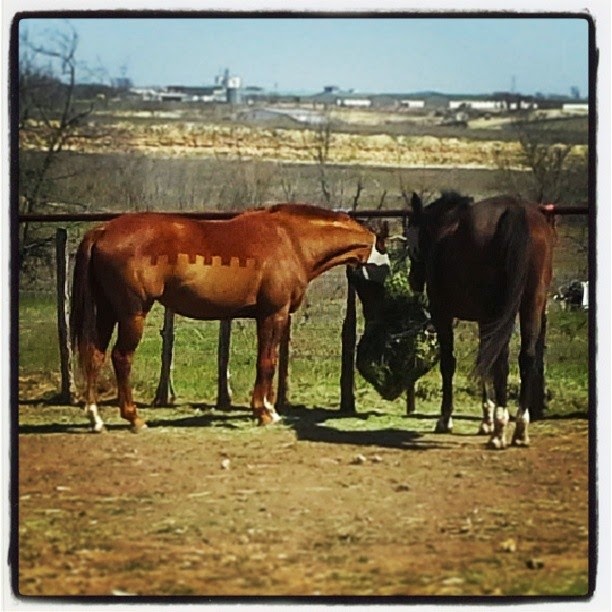 P looks so crappy compared to O.... we'll get her back to where she was!