After a very sudden whirlwind of events, the old Pmare is now home. This has been a total chaotic cluster of a week, and I'm still trying to process my thoughts on everything.

Yesterday, I got a text from P's lessee saying that P had cataracts. Cataracts? She didn't have cataracts when she left my place, when did these show up? Only one eye? And 48 hours ago? Ok, that's not normal.
She texted me a picture: 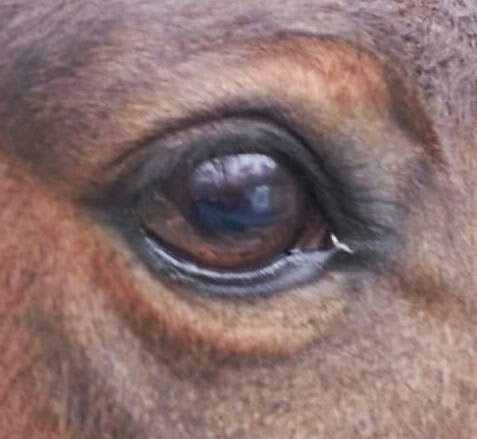 Oh geez. THAT'S not normal. It looked like a small ulcer, or fungal infection. It looked as though there was already a small crater in it. I told her that she needed to have the mare taken to the vet right away, and that eyes were never something to mess around with - it might be nothing, but it might be something that causes her to lose her eyeball. You just don't take changes with an eye.

Then I started getting texts back saying, 'welllllll I don't know how I'm going to pay for that, sooo....'

Welp, that's the end of that. That is a breach of the terms of lease - the lessee was to pay for all veterinary upkeep (and farrier, and feed) in place of a lease fee. (Barring major catastrophe, which was a negotiable thing.) If you can't even afford to have the vet come stain the eye and look in there to see if there is something going on, then you certainly can't keep the horse. It is one thing if you choose to bypass a veterinary issue with your own horses. It is another thing entirely if you choose to do it with someone else's horse. I told her I'd be there as soon as I could in the morning to pick the horse up.

I got up at 4, slogged my way through dressing, driving, hooking up my trailer, feeding the horses, and then driving for several hours to pick up my mare. I texted the lessee an hour out, and then 10 minutes out, to let her know I was on my way.
When I arrived and called to Pmare, she popped her head up and stared at me in what looked like total disbelief. She didn't come over at first, just stared at me while the other horses ate. It was almost as if she was going, "are you seriously here right now?" It was definitely a look of recognition. A minute or so passed, and she decided to make a beeline to the fence to come over and see me. Good old mare.

I still had no reply from the lessee, even though I had texted her to tell her I was there. I had already schedule a vet appointment at 1pm, so I couldn't really hang around. I tried to call her, and the phone picked up, but then promptly hung up. I tried to call back, but the phone went to voicemail. A third call sent it to voicemail as well. Frustrated, I searched the barn for her belongings - her Renegades, her blanket, her bridle - but I found nothing. I tried to approach her door, but her dog wouldn't let me it. Finally, I just gave up, took the horse, and left. I texted her and told her to send the things to me, though I don't expect to ever see them again.

Several more hours in the trailer, and finally arrived and unloaded her at the vet. She's very dirty, very hairy, and a lot thinner than the last time I saw her :( 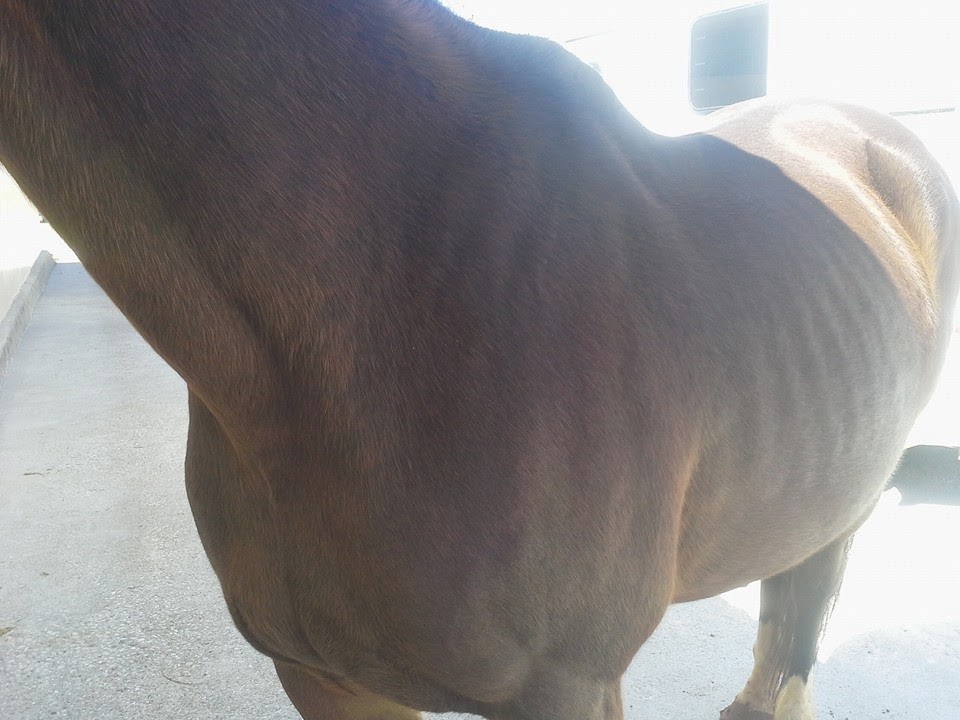 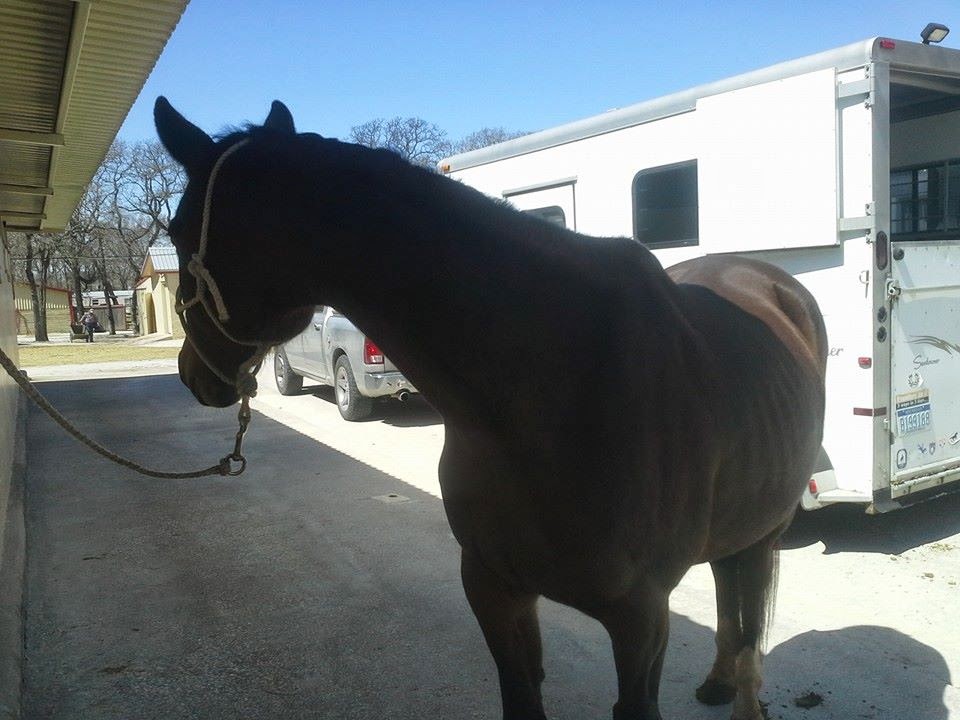 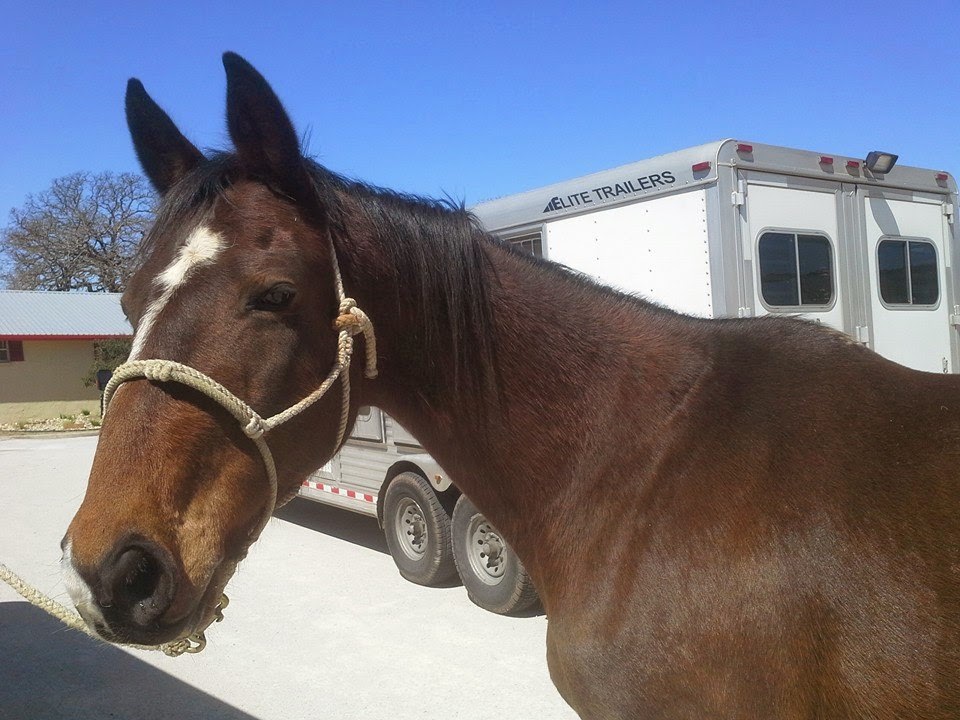 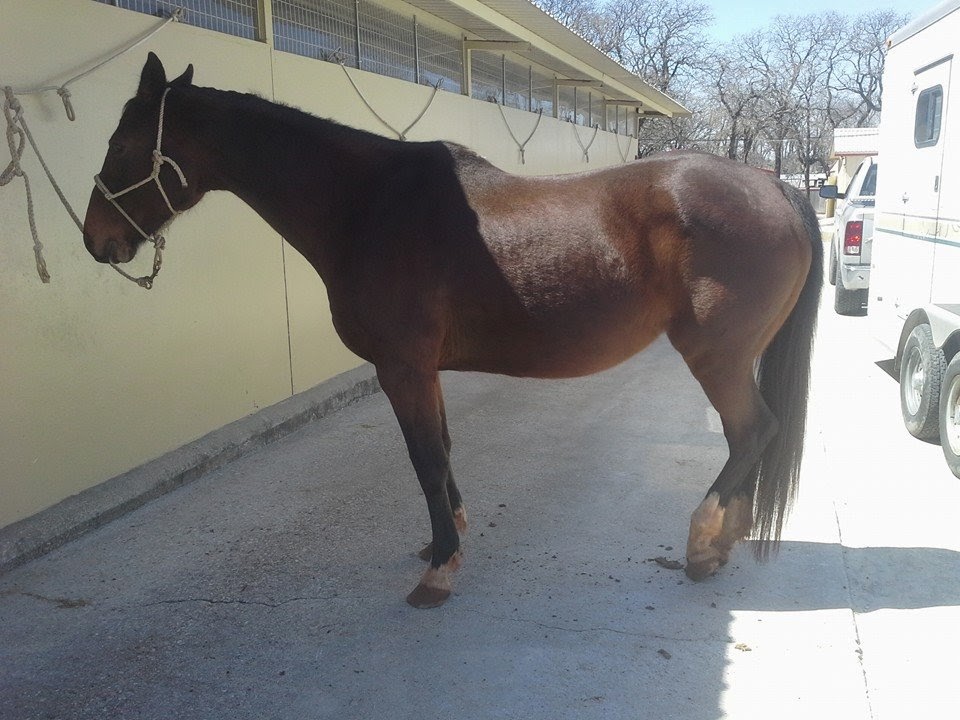 Obviously she's not emaciated, but to give you some idea of a comparison, here's how she looked at this time last year, shortly before she left for the lease: 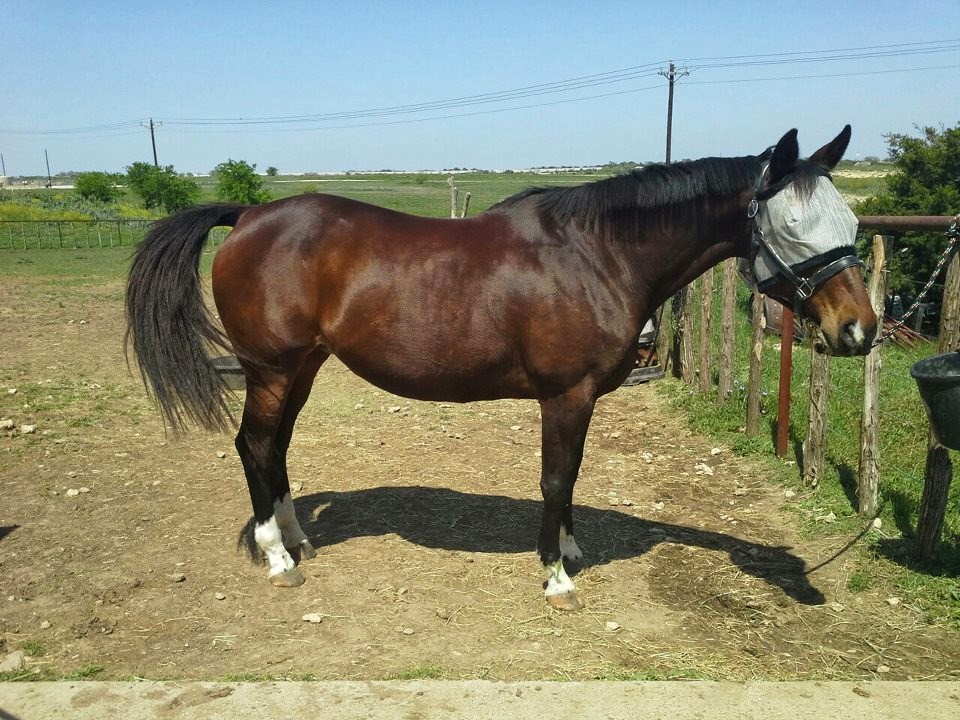 It's unrealistic to think that anybody I could have ever leased her out to would uphold my ridiculously high horsecare standards, but this is a little ridiculous. Return her to me dirty? No problem. Return her to me a little rude and pushy? That's fine, I get it. Return her to me with her ribs sticking out and neck half the size of what it was, and feet flared out with tons of extra toe? That's really not cool.

The good news though? Today, the eye thing has magically disappeared. When I arrived at her lessee's, I immediately looked in her eye, and.... saw nothing. Huh. We stained it at the vet anyway, and... nothing.
Diagnosis? Really interesting looking EYE BOOGER.

Obviously, it was some divine intervention or something though.... she couldn't stay at that place looking this way. All the pictures I've seen of her were taken from angles that just never showed how thin she really had become. I had no idea it was like this. It just took a really questionable looking eye booger to get her out of there.

So, thanks eye booger! Now begins the long process of getting her back to the way she used to look...