The pictures finally went up - so now I can tell you about last weekend's show!

Last Saturday, O and I attended the last show of the season. I was kind of hit-and-miss on attending, as the weather was awful (a cold front dropped the temperature from about 70 degrees to 30 degrees overnight, with a strong 30mph wind with gusts over 50mph), but I decided to go anyway. Unfortunately, everyone else wimped out and we were the only driving full size horse there, us and another driving mini. There were three classes we had entered - driving turnout, driving pleasure, and a cones course - and even though we were the only ones and obviously going to win the classes, we went ahead and dressed up anyway. Why not, right? We bothered to come so why not dress up!

The one problem with the showgrounds we were at was the wind. The show was held at the Parker County Sheriff's Posse showgrounds (yes, there is an actual sheriff's posse here, that really is a thing), and while it is a great little arena for all the throngs of people that come to the fun rodeos that go on here, one thing that it isn't great for is being empty in the wind. It was COLD and howling wind, and the whole arena is surrounded by giant, rattling metal bleachers. They were making all kinds of horrible creaking, groaning, vibrating noises, and they were nonstop and LOUD. When we arrived, O was shivering under her sheet and screaming bloody murder, so I spent a few minutes walking her around in the arena to let her get acclimated. Thankfully, after a couple of small starts, she quieted down. I have to give her credit - she is a pretty cool cucumber in a new situation. Either she just has that kind of personality, or all of the miles of trails we did with her during her first year with me really made a difference for her. We really flooded her with things to think about during that first year, and I think it helped her just kind of accept things as they are and get down to business no matter what is going on.

Had there been more people, the classes would have been run more seriously, but as it was they were nice enough to give us each time in the ring, going both directions at a slow trot, working trot, and strong trot (the speeds used in most pleasure classes), walk, and halt in the middle. At a regular pleasure show in a working or turnout class, the judge comes by, inspects all your gear, asks to see your spares kit, and asks you to back up. In a regular turnout class, 70% is judges on your condition of harness/vehicle, fit, cleanliness, spares, and how appropriate everything is (i.e. not wearing country gear with a formal turnout, etc), and 30% is judges on the manners and way of going of the horse. This ratio is more or less flipped for a working class - 70% judged on manners, performance, and way of going of the horse, and 30% on your attire and harness/vehicle/appointments/etc.

While O was a little bit looky on our first lap around, she settle in and calmed down on the second lap, and was quite fine. I wasn't asked for much from her - she was mostly trotting around with her head up, looking around - but it didn't matter, because she was quiet and attentive. She did break into the canter when I asked for a strong trot - this isn't something we've practiced much, so I don't blame her for it at all. If I plan on actually doing pleasure shows in the future, I have a lot of practice work to do there. This mare's strongest suits are how quickly she can turn, and her neverending endurance. That said, she is not exactly known for being super malleable and totally willing to just do whatever she is told, or capable of really handling complicated tasks. Simple dressage tests are relatively easy for her to handle, but she really shines out on cones and will really be great at marathon - as long as I steer accurately she's always on target.

I wouldn't say our turnout was great - I had to stuff her earnet underneath her bridle when it was already on, because the wind was blowing too hard to put it on her head before the bridle was on - it just kept blowing off. Since I was prepping by myself, I dressed and then harnessed, which meant that my apron slipped underneath my jacket and I didn't even notice. I see it in the pictures though! Your apron should go over everything - aprons were to keep your clothes clean on your way across the countryside doing whatever errands you were up to, so that is the way they are supposed to be worn. Ah well, not like it mattered anyway.
Also, I obviously wore my helmet instead of my froofroo hat - I figured that a) the hat would blow away in 1 second, and 2) with the wind howling, you can't be too careful. Also, it wasn't exactly going to affect our score! 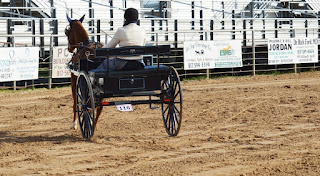 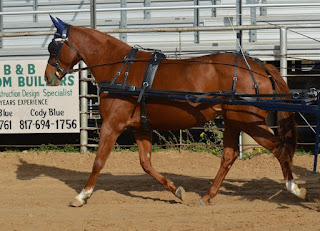 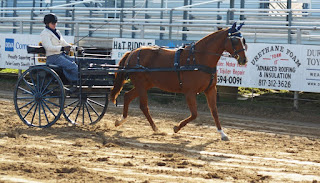 The cones course was set outside of the main arena. There were 10 set of them on a nice winding course, set as Reverse Psychology. Reverse Psychology is a set route of 8-10 cones which you go through in the normal 1-10 route with the red flag on your right - then you have to reserve and go back through in reverse order, 10-1, with the white flag on your right. I've never done a Reverse Psychology course before - it was easier than I expected. I have had red-on-right beaten into my head ever since I was a kid, since it is the same as eventing - so going with the white on the right is hard to me because it feels totally wrong.
We were clear and fast! 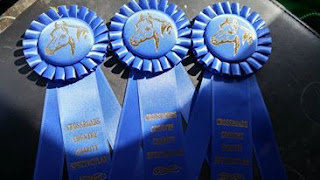 This was our last show of the season. Next year's show season starts in either March or April, depending on the calendar. I'm already ready for it!!


Speaking of which.... I need to figure out a new outfit and color for O and I for next year. With an orange horse and an all-black vehicle, navy isn't going to cut it. Navy and chestnut look great together, but only if there isn't black involved... then you just end up looking like a bruise. Any color suggestions? Be creative!