This is the Dartmoor. 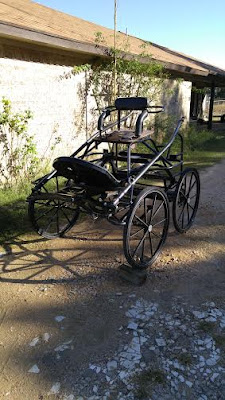 If you're anything like me, you're hyperventilating over this gorgeous hunk of metal right now.

The Dartmoor is an extremely well-built carriage from the UK. Dartmoor Carriages Limited stopped production in I believe 1999 if I remember correctly but I am not sure about this. It's also not clear if these Dartmoors are related to or are the same as the Pacific Dartmoors - Pacific stopped production in 2012 so maybe these were also manufactured by them at a later date? Not sure about that though. Pacific has been bought by new ownership so I hear they will be back in production shortly.

This carriage is owned by one of the NTW ladies that I connected with at the last playday. I happened to mention off-hand that I wanted to do more/move up eventually but didn't have a four-wheel vehicle, and she jumped right in with, "I have one I'd let you borrow!" Naturally, I jumped on that one! Her driving horse passed away a few years back and the carriage was sitting under a tarp in the yard not getting any use - so she offered it to me to play around with!

Well, with some experimentation we discovered we could do this: 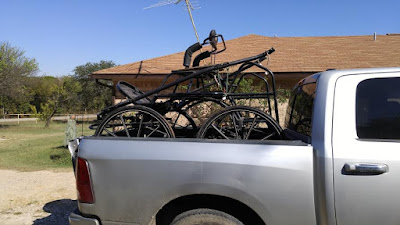 As long as I remove my truckbox and use my winch it is no problem. We ratcheted it in there firmly and secured the tailgate, even though it really is about two inches too long to really shut the gate fully. I could ride with the gate down but I feel a lot better with it up!

I waited until my friend K came into town so that I could have someone there with me for my first spin in the new carriage - I figure you can't be too careful with introducing new equipment. We pulled O out for her first drive since the show, harnessed her up, and hooked up.


This was O's first time hooked to a 4 wheel vehicle. The only trouble we ran into was on the first hill leaving our property - it is very steep and it takes a fair amount of power to get a carriage up it. With two people on board, O started to object halfway up, and then just stopped dead. I had K get out and lead her up the hill, just to be on the safe side. After that, we had no problems whatsoever.

On our second loop of the neighborhood, we stopped and made some harness adjustments (holdbacks were too loose, etc). I don't have trace carriers on this harness, so I will need to get some. Once we made our adjustments, I let K hop in the box seat, and I stood on the navigator platform. K is a horse person but hadn't ever driven until I tossed her up there. Like everyone who goes driving with me, she was grinning ear to ear by the time we were done. 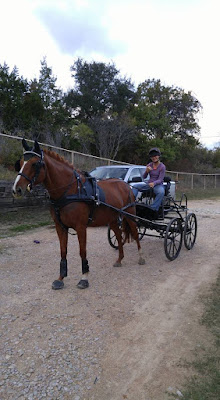 K asked me as we were harnessing up if O was one I would ever sell. My response? "HELL no. This one is a keeper for LIFE." I might have bought her for $500 thinking I could resell her for a profit, but now I'll never let her go!