Having baby horses is just the most fun thing on planet Earth. Having been the first person to handle Pax literally from the moment she was born (I pulled her out, if you remember!), and having been largely the only one to handle her thus far, it has really just been SO NICE to have a little beast who doesn't need nine million things fixed, retrained, and reschooled. I've had largely nothing but adult horses needing much in the way of fixing over the last several years, so to have this little babe from scratch - I just love it. Pax is smart, and easy, and doesn't question things. Her main problem is that she is overly friendly and sometimes all up in your space, as heavily handled babies tend to be. She likes me, and she thinks I am super interesting, so whenever I come into the pasture, she is the first to come straight to me. Things don't frighten her, and even when they do cause her concern, she readily accepts them as just part of her baby world - like a little sponge, she just sucks it up. She is still very immature about many things - she is only 10 months old, after all! - but her brain will mature as her body does.

I have no intention of rushing anything with her, or doing things that I don't think she is mentally or physically capable of until she is really ready for them. That said, I was mulling it over and over in my head recently, and I decided - why not do the yearling section of the Future Event Horse series this year, if she is mentally capable?

The Future Event Horse program, if you are not familiar with it, is run by the USEA. It is not to be confused with the Young Event Horse program, which showcases the potential talent of 4 and 5 year olds under saddle. I don't really agree with many of the things they are asking these super young horses to do under saddle, so I wouldn't participate in that series if I ever get back to eventing. But the FEH is shown exclusively in-hand, and evaluates the potential for horses as upper level event horse prospects.
Is Pax really an upper level event prospect? Eh, not really. I think she is and will be totally capable of cruising around mid-level, with either myself should I decide to get back into eventing (and maybe I will!), or with another person should that time ever come. But, I think these programs are great exposure for these babes - they are local, they are pretty low-key and they are good life experience. There are a few of them within two or so hours of me, so we wouldn't have to go on long stressful trips or spend extended periods of time away from home. Since there are only a few of them a year, the rest of the year she can go be outside growing and playing like any baby should - and this is highly encouraged by the program. They specifically state that it is more important for a baby to be turned out and look a little scruffy versus be super shiny and slick and fat from standing in a stall, which I really appreciate.


I started looking up dates for the FEH events in our area. Oh crap.... there is one at the end of next month. That is NOT very far away!


On Wednesday, I loaded and took Pax around the block in the trailer, as her first ever totally solo ride. She has been in the trailer with her mother a few times, and practiced loading by herself at home, but hadn't ever been totally shut in and going down the road by herself. She handled it well, and only had a minor fit when we got back home and all of her idiot marefriends started having a total panic attack. Even Dylan was going, "I don't know these beasts..." Pax almost fell down when trying to turn herself around in the standing stall (not small enough to do that anymore!), caught herself, then stood still and waited to be unloaded. She still can't figure out how to back out, but she is able to turn around and walk cautiously down the ramp. Thankfully she is not a leaper - she is a thinker, mostly. 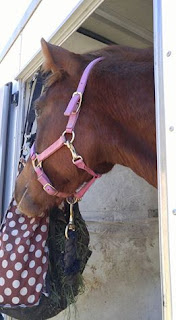 Yesterday, I decided I had better see how she was going to handle going off property for the first time by herself. I figured she would be pretty awful, as babies tend to be. and boy was I ever right. She was just AWFUL, although she did eventually settle down some.

I can't blame her for her awful behavior. Going off property for the first time is scary. Being without your herd is scary. Seeing things like cows for the first time is scary. It is quite a thing, to be frightened of these things. But, my main problem was not that she was afraid of things. She wasn't afraid, not like I expected. She screamed bloody murder the entire time for the other horses, and she did spook half to death when she saw the cows go by, but her main problem was her fallback tantrums she has when something is overwhelming for her. When she can't handle something (as toddlers are wont to do), she goes into bananas bersek mode and comes at her handler, She doesn't try to get away from you, she tries to come at you. This works in the pasture, because at 10 months old she is the literal boss of the entire mare herd. She shakes her head and she shoves her body around, and all of the other mares - her own mother included - get out of her way. And P herself is kind of a cow sometimes, and fully had her old owner taken advantage of in the same way - she just barged around, and the old owner got out of the way. She doesn't do it with me, but I know she would if I let her.

It's not like this is anything new. I've been dealing with this attitude since she was a neonate. I sat on her and squashed her more times than I can count when she was very small. I still have a mark on the back of my neck from where she reared up and struck me with her little needle hooves as a very tiny babe.


She's not nasty about it. She doesn't pin her ears, or bite, or kick, or be mean. She just barges her giant brown body around and she expects this to get the point across... like her mother does.

Needless to say, there was some major baby beating going on in that area for a little while.

BUT, that all said, somewhere in the middle of all of that, I took her back to the trailer and tied her for awhile longer. She gradually became more quiet, ate some hay, and actually stood still. I took her back in the arena, practiced some more handling, and was pleased to find that she was listening. She loaded well back on the trailer, rode well all the way home, and today seems to not hate me for having put her through this ordeal.

Pax know how to stand still in an open position, leads very well at the walk, and trots in hand better than nearly all the other horses on my property (save for O, who is super good at this). She just.... has these giant baby tantrums.


So, I think the FEH at Meadowcreek next month is still on. She will stand, lead, and trot in hand fine, I am sure of that. She just might, you know, show off some of her redheaded side at the same time. If you're going to Meadowcreek... you might want to some watch the fireworks!