After O's uncharacteristically poor performance in the dressage at Sunrise Ridge, I thought she might be in need of some chiropractic work. She was definitely full of blazing hormones, which didn't help anything, but she was also really titchy about the bit and about turning to the right, which is a bit out of the ordinary for her. I've used a couple of different chiros since moving to Texas, and hadn't ever really found one I liked - but had the name of a new one, who came out yesterday to work on both Dylan and O. She was both kind and thorough - the horses are the ultimate judge here, but as for me, I really liked her! It has taken me a few years of being here and searching, but I now have a dentist I love and hopefully a chiro I love too. I did have a really good bodyworker as well but she has moved back to Georgia unfortunately, which sucks.

I was definitely right about something being out and restricting her on the right side. She needed adjustment in several places, including her jaw, poll, wither area, ribs, and SI. She also worked on her femurs and front sesamoids on the right side, which I've never seen a chiro do before. She had me feel them before and after - before they were decidedly grindy and crunchy feeling, after they felt much smoother.
Dylan was the surprise - he was out literally all the way from jaw to tail. K told me he hadn't had chiro work in quite a long time, so it's not surprising, but he rides so well and so evenly in both directions that he must be really excellent at compensating. He really tried to be a good boy, but it was clear that he was really sore in certain areas, and he tried to bite us both several times as well as spent a lot of the time crossing his jaw and chewing his cheek. He's normally very kind and not a biter, so it was obvious these areas were really bothering him. When the adjustment went through, he would yawn these enormous yawns.

After each adjustment, she waited for the horse to respond with a lick, chew, headshake, and in Dylan's case a whole bunch of yawns. If the horse didn't respond, she worked on the area again until she was sure that the horse had released.

Both horses have 48 hours off following the adjustment. Dylan needs to be seen again in a month, and I need to do tail tucks with him AM and PM to help engage his abs and stretch out his back. He's already a very typical Spanish horse who gets very short in his back and upright in his neck, so he'll probably want to go right back to old habits, but we'll be sure to do lots of stretchy work with him to help keep that back supple and strong. I haven't ever done much lunging work with him, but I may put a chambon on him and work him that way to help that back stretch out. 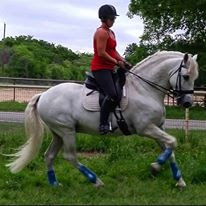 O has a show on Sunday, just a fun Games Day, so I was happy to give her this week off after Sunrise Ridge to get adjusted and relax. The Games Days need no preparation beyond that - she'll go in there and work for me like she always does at these fun shows. Here's hoping she'll turn and burn extra fast now that she should be feeling better!

Email ThisBlogThis!Share to TwitterShare to FacebookShare to Pinterest
Labels: chiropractor