I've been hinting on and off that I won't be showing O next year, but be focusing on Dylan instead. Quite a number of people have been asking why, and wanting to know what's going on.

The first part of that answer is pretty obvious: I have an incredible riding horse for a limited time only. I want to fully utilize that!

Dylan was supposed to go to his first WE show this weekend, but we ended up having to scratch due to several factors - the weather, a change in venue, and a super late running schedule that would be putting me back at home just in time to unload the horse, drop the trailer, and drive back out the driveway to go to my first clients of the morning on Sunday. You think I'm kidding but I'm not. I had no idea a one day show would need three entire days. I would have taken an extra day off had I known! As it stands, I decided it would be prudent to stay home, keep practicing, and prep for the next one, which is next month. Dylan won't be showing much (hardly at all) until October/November, when I expect things to ramp up a bit for him - O's season will be winding down and finishing at that point. And that's when she will be done for awhile, while I focus on him.

But she won't just be sitting around... she'll have something else to be doing in the meantime! 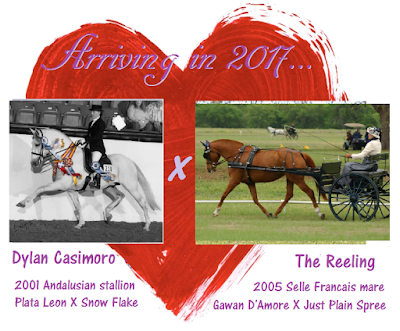 Now before I get any further, I of course feel obligated to give my little speech asking people to not send me hate mail and tell me I'm an evil irresponsible ass for breeding my horses. I'm 31 years old now and I could give a damn what people on the internet have to say about my decisions, seriously, but it would be nice to not have to deal with all of that hatred. People are UGLY about breeding. I wrote about it when I bred Pmare last time. I got absolutely the WORST flack when I talked about breeding Gogo, so much so that I'd walk away from my posts in tears sometimes. It was horrible.
Now of course, I am older and give way less of a damn about basically everything. So, I have no qualms about sharing my experience this go-around. Most everyone was super positive when I bred Pax, although I did get some 'you should kill yourself you cruel person' emails when I decided tentatively put her up for sale. Whatever.
Surely by now I have also appeased the "get a rescue" people. Between Darby, Zuul, and the mules I think I have done my fair duty. And I would absolutely rescue again. And will rescue again!
So, if you have a problem with my carefully thought out and planned for breedings - go away and thanks for reading. Don't let the door hit ya where the good lord split ya.
And if you don't have a problem with it - read on my friends!!

I really believe that O is just one of those super rare once-in-a-lifetime finds. Taking a chance on a spastic, almost unrideable $500 warmblood was risky and may not have paid off for someone less determined than myself. I believed in - and will always believe in - this mare, and fought to find something she would succeed at and love to do. And I found it in driving, and she has been basically unstoppable ever since. Is she difficult sometimes? Absolutely. But I wouldn't want a deadhead slave animal who plods along just doing whatever I ask anyway. That's the kind of animal I *wouldn't* breed. I want my animals to be full of life and power. And now that O has a job she loves, the only troubles I ever have with her are when she is either super hormonal or when something isn't quite right - like needing a chiropractic adjustment. The rest of the time, she gives me everything she's got. She is sound and strong, a beautiful mover who can turn on a dime and go forever. I want to replicate all of those things.
And Dylan of course needs no introduction. He is truly a testament to his breed. His show record is so vast and extensive that I wouldn't be able to fit it all into a simple post even if I tried. He is 15 and is completely sound, and requires no maintenance aside from the basic stuff I do for everybody. He is an incredible mover. He has schooled through Intermediate and I have no doubt that he would be a Grand Prix horse if he were in more capable hands than my own. He is charming, kind, gentle, and easy to handle - watching him bloom into his own over the past 6 months has given me this really amazing insight into his personality, something I think a lot of people breeding don't have access to. And to have both of these horses here - to be able to work them both, have a history with both, and a relationship with both - that is extra special to me.

What I am hoping to get out of this cross: Big, flashy movement, short coupled and powerful, and the ability to do dual time as a dressage horse and a driving horse. I believe in breeding like-to-like as your best chance of really getting what you want, and I think these two will really deliver. It's not so much trying to improve on one thing or another - it's trying to enhance what they both have to offer. Dylan is homozygous so I am guaranteed a grey - it would be amazing to get a matched pair of driving horses out of these two in the future. But, we shall just have to see about that. 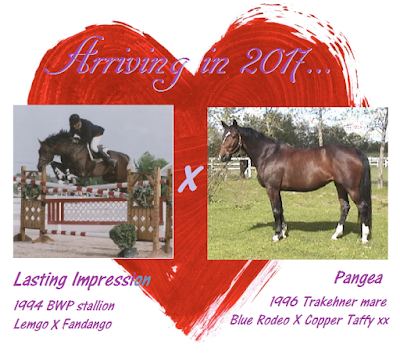 I've talked a few times about wanting to breed P to Lasting Impression. Look at his bloodlines. Do you know who he is? That's Gogo's FULL BROTHER. He was a GP horse at one point, approved with the Belgian Warmblood studbook, and is now still around in his 20's, bebopping around hunter courses with his adult ammy rider, still sound and going. That says a lot about longevity to me, something I did not get with Gogo. Whether or not Gogo's issues were just freaky ones, or whether or not there was some unknown reason she could never quite heal properly, I'll never know. But at the time, I didn't want to breed her because I was worried her subsequent foals would have the same issues she did, not to mention the fact that I didn't think she could carry the weight of her pregnancy on her legs. And I still think that was very sound reasoning, but I regret losing her and not being able to breed her, and still miss her, every day. 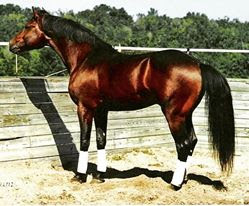 What I am hoping to get out of this cross: A big, good minded all-arounder. Baby should jump like crazy but probably will move quite huntery, which is fine for my purpose. Gogo did too, and while she wasn't going to be a upper level dressage horse, for an eventer she was exceptional. This stallion is known for putting really quiet minds and good size on his babies. I do hope one day to get back to eventing, and do more foxhunting as well. This one is not going to be an upper level dressage horse by any means, but it should be able to do just about anything else with athleticism and a good heart.

Anything and everything can happen when trying to get mares pregnant, so I'm not going to jump on anything until we have heartbeats confirmed for both of them.