Doing back-to-back shows is insanely exhausting. I've done it a few times in my showing career, but it always leaves me feeling like I have a million loose ends at home and at work that I haven't gotten done on any kind of timely basis, which I don't like. As we have a limited amount of shows in our area, we don't have a lot in the way of choices, so when there is a big show and then another big show right after it - well, that's what we do. Immediately after getting home from Pine Hill - the very next day - I set to work prepping everything all over again, washing all of my show clothes and O's boots, cleaning my carriage, washing harness, remembering tests and courses, getting hay and feed, and all the rest of the song and dance that comes before a show, on top of working basically nonstop all week.

Friday arrived in no time, and before I knew it I was loading up my carriage and getting ready to hit the road. One downside to driving is that it's basically the biggest song and dance production you've ever seen in terms of getting gear ready for a show. You think it's a pain in the butt to clean a couple of bridles? Try scrubbing down a marathon carriage. Sometimes people bring TWO carriages. And two harnesses. And two horses, or four horses! Can you imagine? Four horses plus a spare horse, eight plus sets of harness, and two big carriages? It's hard enough to me to wrangle just one carriage, one harness, and one horse - especially since I do it all myself. It's such a process to get ready - the carriage has to be cleaned, then it has to be winched carefully into the bed of my truck and strapped in securely, then the trailer has to be hitched, and THEN the horse gets loaded. THEN we can get on the road.

Naturally, as is apparently my curse when going to shows, I had YET ANOTHER flat on the way up.

I had replaced the spare on the way down to Pine Hill after the other blowout, so I had my brand new spare ready to go (hell, the spare I put on for Pine Hill was also literally brand new). I didn't replace the spare on the continuing trip this time for some reason - I don't know why, but I just knew I wasn't going to get another flat. And, I didn't. Although relying on a feeling like that isn't exactly recommended most of the time.

We arrived in Stillwater after an otherwise uneventful drive, if you don't count the tire blowing and driving through yet another small town completely decimated by a huge tornado. Apparently that is also something that happens when I go to horse shows?
Because the world is really small, my favorite college professor who taught me for four years when we were both in Ohio now lives in Stillwater. As such, I had an extra set of hands and a soft squashy local bed to crash in all weekend - what are the odds! I love Dr. G dearly and am always glad to see her, and still shake my head in wonder over the fact that we both ended up way down here, far away from the chilly crap winters of Ohio. Dr. G met me at the showgrounds and helped me set up O's stall and tuck her in for the night, and we also picked up my packet. After unloading my carriage, we went and walked the cones course, which made me feel itchy just looking at it. The thing was the most horribly cranker of a course that I've ever seen, and I'm pretty sure the turns were all set for VSEs. It was also on a bit of terrain, which was not something we've practiced much with. I was feeling very confident coming off of my clean cones at Pine Hill, so I wasn't terribly worried about it at the time.

The morning came WAY too early, and after staggering out of bed and making my way back to the showgrounds, I did my usual morning ritual of feeding the mare, cleaning her stall, taking her for a handgraze, and then going to walk the cones again. O was AWFUL about eating all weekend long. She's a good eater at home, but horrible when she is at shows. She lives on Ulcergard and ProCMC when we go away on overnights, which is probably the only thing that saves her from being eaten alive with ulcers. Over the entire course of the weekend, I don't think she ate more than two flakes of hay total, if that. She also managed to eat one of her grain meals, but only one - it took her the entire weekend to finish it. Granted, I had put some electrolytes in there, which she doesn't like taste of, but still. She grazed whenever I'd take her out, and here and there I would catch her eating, but she did not eat much. She doesn't act concerned, or nervous, or anxious in any way - she just stands in her stall and looks around, or stands in her stall and naps. It drives me completely nuts, but as long as she is on her ulcer preventative, and is at least eating some cookies and grass, that's something.

I watched three VSEs (mini horses) eliminate out in a row on the cones course, and started to feel a little more anxious about it. Even they were having hard times making those tight turns. How was my big horse going to handle it?

I bathed the mare, readied all my gear, and hitched up for dressage. I felt that I had warmed up for too long at both Sunrise Ridge and at Pine Hill, so I shortened my warmup quite a lot. While I think it was a decent move to do, I still had a blazing hot horse when coming down the centerline. In some ways, this was good, because I had all the forward I needed - I got tagged at Pine Hill for not being forward enough. This time, we were *too* forward, and I got a few comments that we were rushed here and there. I also lost a whole lot in the way of relaxation and submission, because I basically had no submission whatsoever. O overshot all of her transitions and fought me through nearly all of them - she wanted to trot, and trot NOW, and trot fast. She chucked her head in the air a few times in both the downward and upward transitions, although they must not have looked quite as horrible as they felt because the judge did not hammer me on them. The test scored mostly 6s all the way down the line, which I felt was fair. We ended up with a 62.0, which was actually only one point worse than our score at Pine Hill. 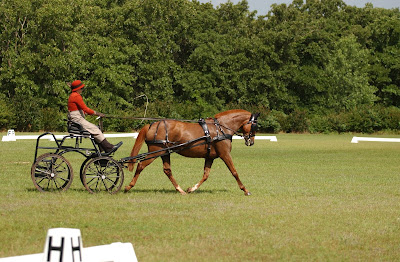 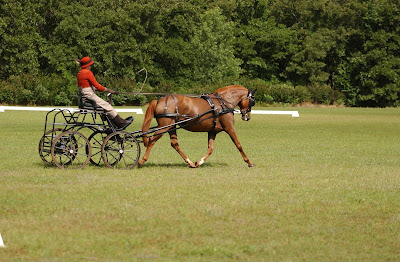 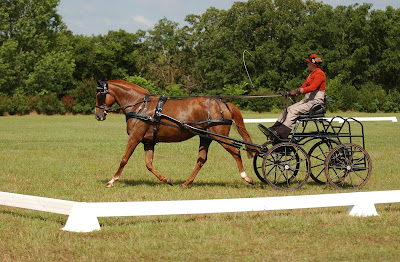 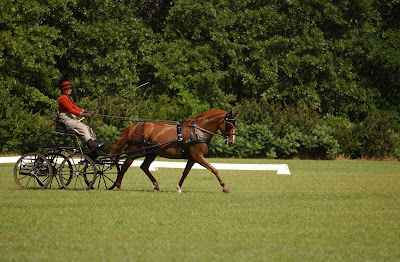 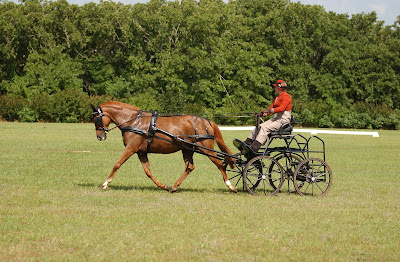 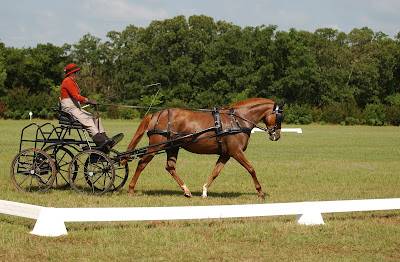 I definitely need to learn to SIT UP when I am in the box seat. Why do I always hunch over?
I'm also starting to dislike my outfit. I don't actually think the color goes with O as much as I had originally thought it did. Ah well... lots of time to think about that, for the future.

We were in 3rd after dressage - not last for once!!

In the cones, however, things got all kinds of interesting. And by interesting, I mean they were terrible. O just was on the muscle from the first turn, which was this horrible cranker to the right. I creamed the very first cone, and had a firebreathing dragon on my hands all of a sudden - head tossing, snarling, no steering and no brakes. And then suddenly, too many brakes, when she nearly stopped dead in the middle of the combination.


Overall, I had three knockdowns but quite amazingly no time faults. I had to spend a few minutes schooling the mare in the warmup on how we listen to turning aids and how we don't just thrash around angrily whenever we don't want to do something. I think she could very well be out again chiropractically after Pine Hill - she's not normally THAT disagreeable. Had I thought of it, I would have gotten her adjusted this past week, but... she could also just have been being her red self, which she does whenever you make her mad with too tight of a turn when she didn't expect it. I have to be careful in how I set her up so as not to fluster her little brain beyond capacity.

We were in 3rd again in the cones, so solidly we were in 3rd overall. The cones course was truthful carnage - not ONE horse or pony went clean, not anybody. A few VSEs went clean, but not any of the large horses. I also feel strongly that some of my cones were awfully narrow - they didn't all appear to be measured the same, but I didn't say anything to show management as I wasn't sure if it was just my imagination or not. Several other people said the same thing to me later though, so it's hard to say.

After dressage, I washed the mare, cleaned the harness and carriage, and got ready for the next day....