My newest little kiddo is here!! As usual, there is quite a long story behind why and how he ended up in my herd.

You're probably thinking, "you're kidding, she brought home yet another critter?"

You're right. I totally did. But this was an opportunity that I just could not pass up, so let me explain.

You all know my love of hybrids is VERY strong. I could almost see myself never getting another horse again, just continuing on with hybrids - that's how into them I am. I love my horses of course, more than anything - but the hybrids are just incredible. I LOVE them.

My interest in hybrids is of course not just limited to mules. I'm equally as interested in zebroids, but with more skepticism. I love donkeys and if I had lots of land would certainly have a few. I think zebras are pretty cool but I never, ever in my life would want one. Many zebra hybrids inherit the nastiness of their zebra parent - they can be aggressive, bite, kick, strike, and be generally disagreeable. Zuul was not any of those things, but he was completely unfriendly unless it was on his own terms, and the less handling he got the less friendly he was. Again, if I had many acres I would have kept him, but I have limited space and if they are here then they need to have some kind of redeeming quality or usefulness. Sounds kind of mean when I write it down like that, but I just don't have the space for useless hayburners unless they've earned their uselessness, like Darby. Zuul was also not social and I did not have room to fairly keep him housed alone, so it was a good thing to rehome him to someone experienced with his stripey kind.

But that did not dampen my interest in zebroids. In finding Zuul, I also got dropped right into the middle of the fairly small zebra/zebroid community, and became acquainted with many good people. One of these is a breeder in Michigan, not too far from where I grew up, and not long after I got Zuul I mentioned to her that I might be interested in one of hers one day, since I didn't think Zuul was really going to be capable of what I was wanting to do with him (drive). I happened to notice that one of her clients was selling a little zony, one that she had bred and raised, and I commented that he would be a really nice little driving prospect.

And that started the ball rolling. 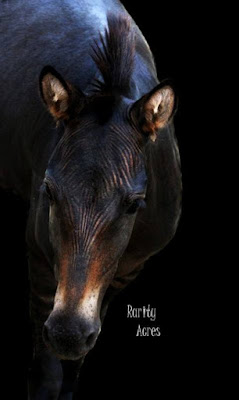 I had special specific criteria I was looking for in a zebroid. I was not out to just get any old one, not by a long shot, and I was prepared to casually peruse for as long as it took to get everything I wanted. I wanted something I could specifically break to drive and show. As it so happened, Zazu had all of the things I was looking for.

He had all of those criteria. He was bred specifically from good friendly stock, and raised carefully and correctly. He is little - a bit over 11 hands. It's impossible to say what color he really is - zebras pass on their own funky genes, after all - but he's very dark and shiny, and up close you can see those stripes really popping. It's very hard to capture the stripes on camera. In many of my pictures, he looks just pitch black - but you can see them in person really well, or if they're highlighted with a photo filter. 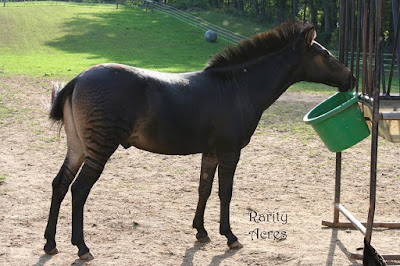 The original plan was to have Pax sold first and foremost before I made any commitments to anything. I told them I couldn't make a decision about anything until that happened, so I understood if he sold to somebody else in the meantime.

Several people made offers. Some of them even looked up shippers and committed to buying him, then vanished. The breeder mentioned more than once that she thought it surely was destiny that he end up with me, because time and time again the buyers would fall through.

Then my buyer fell through too. I told the breeder that there just wasn't any way it would happen, because the whole thing was contingent on that sale. But the breeder and owner wanted this to happen, so they made me an offer that was more than generous, in order to make it work.

And now, he is here. My cup runneth over. 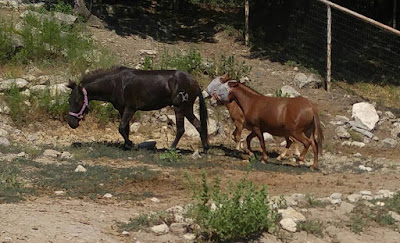 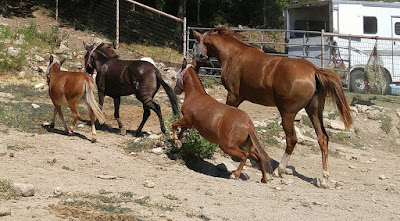 He is beyond what I could have hoped for. He is super friendly, quiet, and social. He is easy to catch, ties, leads, and does quite a lot of other things to boot - all the basics any 2 year old should do. He comes over for scratches and petting already, which is so much more than any of my mooles did when I first got them. He's a complete cakewalk in comparison to them.

And he loves to drink out of the hose. How cute is that! 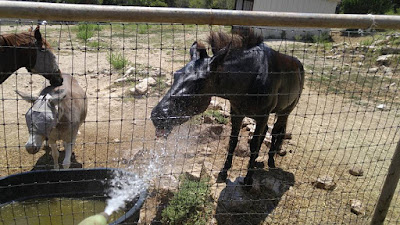 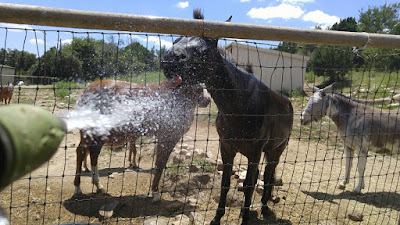 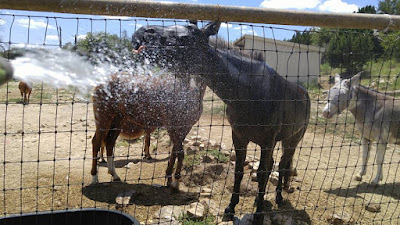 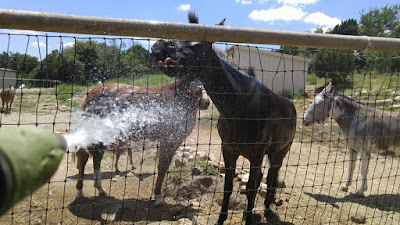 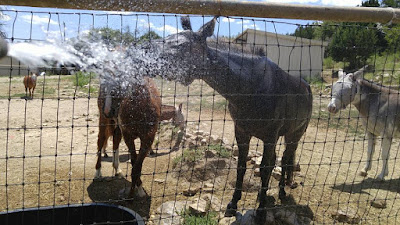 Inevitably, when I start talking about my beloved little hybrids, I usually get a small assortment of "why?"s. People tell me they don't get it, they don't really understand the point and they don't know why I do it. Really, I only have one answer to the whys: Why the hell not?

I don't really care what people think of my interests. I'm pretty stone now when it comes to defending the things I choose to spend my money on - they bring me enormous joy and they are useful to what I want to do, so what is even the question here? It used to upset me when people would be negative about it, but not anymore. I don't get hunters, gaited horses, or western pleasure, but people do it and enjoy it, and it isn't my money paying their bills, so why should I feel like I have a say in their joy? (Well, except maybe western pleasure. I'm pretty sure there is no joy in that discipline.)

So if you're sitting there going, why? That's basically the only answer I have for you. Because they're great, because I can afford it, and because I love them. And life is too short to not enjoy yourself, so get out there and just do you. Just do you people! Do whatever makes you happy, because in the end that's all that matters anyway.

Email ThisBlogThis!Share to TwitterShare to FacebookShare to Pinterest
Labels: zony