Over the course of building a business, I have been through many phases of what time means to me, and what busy means to me. When first starting out and transitioning over from a full time job and some small time trimming, I had no time whatsoever, but I only had one horse. Eventually I had two horses, then three, then two again, and then one again, and back to two, and so on. I went from a full time job and small time trimming to a part time job and part time trimming, which inevitably opened up a large portion of free time. When I was not actively working on business building, I had tons of down time to ride and play and do whatever I wanted. I was broke then, but I did all right, and I knew I should enjoy all the time I had, because one day I would have the money instead of the time. The business grew over time, and my free time started to dwindle. I started to have to redefine what "available time and energy for pleasure horse pursuits" started to be. It used to be I would need a full day off to get some real horseytime in. Working days tired me out, and I didn't ride or work horses on those days for the most part. Then my time REALLY started to dwindle, and I realized that if I was going to have horseytime at all, I was going to have to just get over my tiredness at the end of the day and just do it. That was extremely hard for me at first, but I really put my mind to it, and now I get it done. It's not uncommon for me to go out and do 15+ horses, and then ride or lunge a few when I get home. My biggest limitations are daylight and drive time - if I have to drive all over the Metroplex, to get my quota of horses done, it takes significantly longer than if I get them all done in just one or two stops. Every day is different, which is one of the great appeals of my job. I get to see different people every day, take different routes, and have fresh things to work on and see. But I do have to spend some time planning ahead, so that I know for sure when I have time to work whoever needs to be worked.

The babies take hardly any time at all, although they always take mental energy. The Zoodle Himself is doing extremely well, and continues to be incredibly friendly and kind. He loves people, loves scratches, and will always come over for a snuggle. I've ponied him twice off Pmare, and he continues to get even better at it - he tends to resist for a moment when we start something, then his second answer is generally always "yes" and he proceeds without issue. 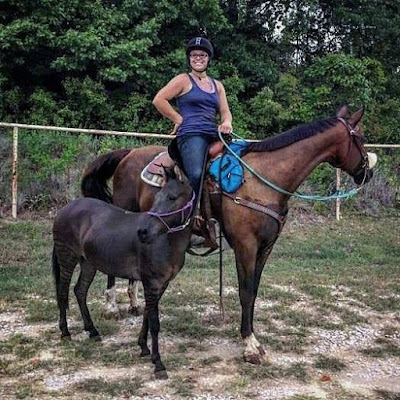 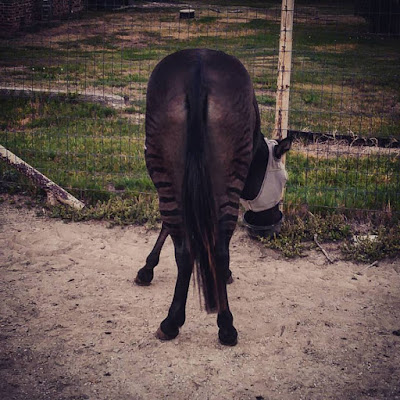 Dylan is the one who gets the most work, 4 days of riding a week if I can squash it in. This would not be ideal or workable if he was an event horse or a horse who needed a higher level of fitness, but for the time being it's completely achievable in my schedule. It requires me trailering out to ride, which is a rather timely affair. I also have the trouble of not being sure when I will have access to the arena lights at WD, as I tried to use them the other night and they didn't go on. Not good! I need those, and will really need them as the winter approaches.

I think as I continue to get into more detailed things with Dylan, I'll start fleshing that out better in blogposts. I used to write so much in detail about the rides I would have with Gogo, and have done so much less of that now that I have a bunch of babies who are doing extremely rudimentary and simple things. There is only so much description you can go into when you say, "Groomed the baby. Picked her feet! She was good." But riding an upper level horse when there is SO much in the way of complicated and subtle communication going on... that deserves more fleshing out.

I bit the bullet this week and rejoined all of the major organizations that I will need for showing - USEF, USDF, and IALHA. The 2017 season in our area starts in the fall, and we go through basically the entire year with shows on the calendar, although the majority of these are jammed up into the spring months when our weather is the best. It's a bit of a circus, trying to get all the paperwork together for this - these organizations all require notarized copies of our lease, which meant K had to go print them off, mail them to me, then I have to go get them notarized, and then send them in with fees paid. Dylan is thankfully lifetime registered with all organizations, so that's taken care of. As for working equitation, I'm a member of WE United and WEIAUSA, and intend to show, but probably my biggest goal is trying to get my silver medal with the USDF. I'll clinic this fall and possibly do some WE schooling shows - and next year, if all goes well, I have my eyes on much bigger prizes, like Pin Oak, Haras, and maybe even the Andalusian World Cup in Las Vegas, as well as the possibility of IALHA Nationals. There is a LOT between now and then, but the possibility of these looming in the imminent foreground is tremendous motivation to get my butt up and go ride, whenever I have the spare time. 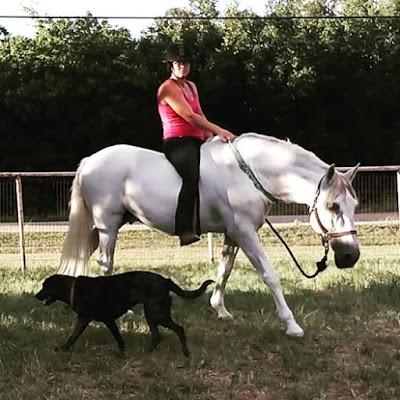 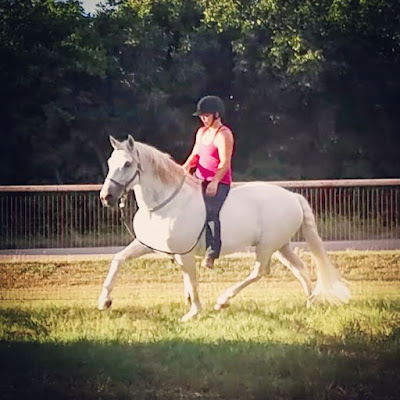 She wasn't fully hitched in this picture. The breeching is not on yet. But she is hooked via the traces and pulled the weight of the cart by herself. I approached this way differently than I did with O, who I first dragged a tire with, then put her in drag shafts, and then hooked her to Janky The Training Cart. With Lendri, her intelligence and reactions made me approach this differently. I think I'll approach it differently for every one that I break to drive. I certainly didn't just stick it on her and go - not at all. There was a lot of careful introduction, of leading her and rolling the cart next to her, and behind her, of placing her between the shafts to feel them, of pulling the cart along behind her with her in the shafts but not hooked. She did so well that by the end of everything, I had her pulling the cart by herself with full weight in the breastcollar, although not with breeching as I think that needs more desensitization - she might speed up and get fast when she feels it for the first time. As you can tell by her expression, she was not terribly bothered by the entire ordeal.

9 months ago, she was at the kill pen and so wild that I almost couldn't wrangle her onto my trailer. I can't believe how far she has come!!

Speaking of wild, Sriracha was not terribly good this week, but here she is lunging with harness and bridle: 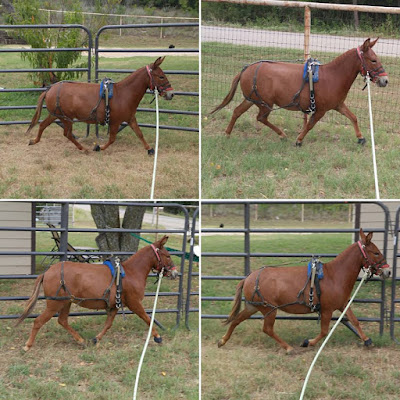 We need much work with acclimating her to the bridle. It took her two seconds to figure out how to flip her tongue over it, which then pinched her tongue and made it bleed. That's not exactly the best way to teach a mule that the bit is not a bad thing. This snaffle is an eggbutt with a double jointed copper alloy mouthpiece, so it's about the nicest thing I could put in there, but I may need to look for something else.

Despite all that, she sure is fancy isn't she?