Pax has survived the first two shows of her career! Or rather, *I* have survived Pax's first show shows.... with only some minor bodily injury on my part.

We all know Pax hit the ground rearing... 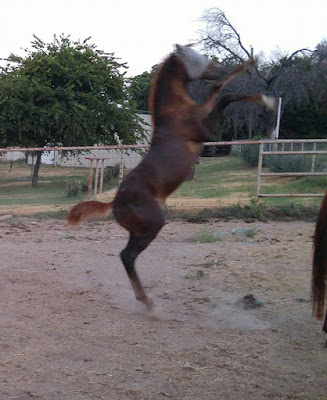 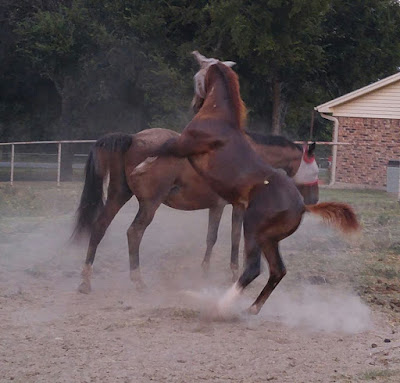 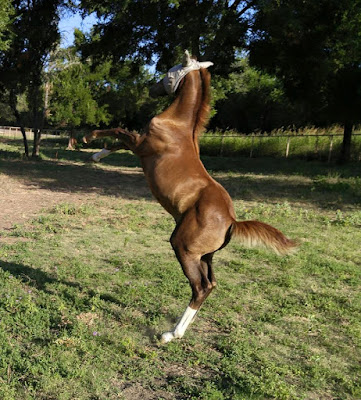 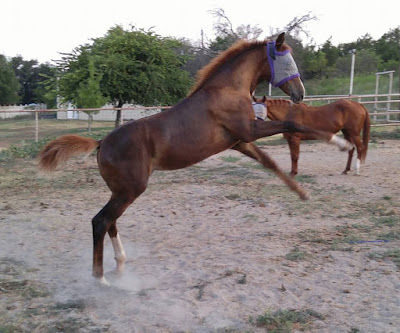 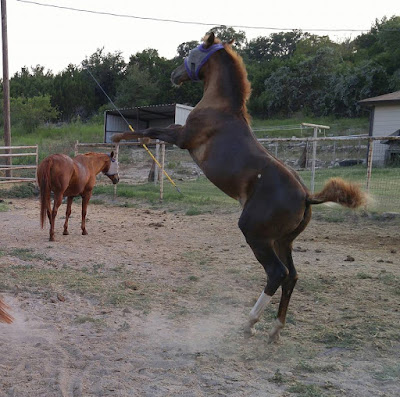 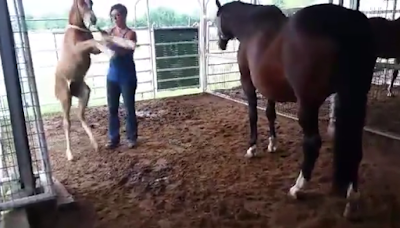 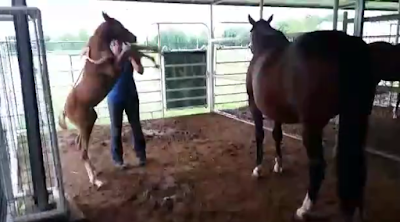 So it's not really any surprise that, at almost two years of age, Pax still has a tendency to be.... light in her front end. She also has moments of what I can only describe as Toddler Rage, when you have a giant fit over something and your thrashing defies all reason, and also usually gravity.

In early March, I decided to do a dry run with taking her off property and handling her in a strange environment, to see if she could mentally handle a show. I had taken her off the property by herself before, when she was almost a yearling, but she was such a wild animal that I decided to can showing her as a yearling and try again as a two year old. I'm glad I did - she's going to take a long, long time to mentally mature, but like with ponying, I tried it once when she was younger, decided to throw her back in the pasture for like a year, and then the next time I tried it went much better.

I hauled her to one of Dylan's lessons with Louisa as the trial. It was kind of the craziness you would expect when trailering a breeding stallion with a young sexy piece of tail - there was a lot of screaming, a lot of thrashing, and a lot of disracted horseflesh. Dylan was FIRED UP for his lesson, and Pax was obnoxious when left tied to the trailer. She put a foot through her haynet and had to be rescued, she pawed for about an hour, and then she finally decided to be quiet near the end of my lesson. After putting Dylan away, I led Pax over to the arena, and Louisa helped me lunge her a bit. She did very well! She has the basics of how to lunge, very lightly, and she trotted in hand like a civilized creature. I figured I had the green light to send in my entries for the two FEH classes I wanted to attend - one at Meadowcreek HT, and one at the Texas Rose HT.

I knew the judges wouldn't care too much for her. She's very short, and short-legged, and not a big mover. She's not a *bad* mover, certainly, but she's not going to Rolex. She's not one of those lean, long legged freak movers they're looking for. The FEH is designed to find the best that American breeders are producing, and Pax is not that. But, it's a good experience for her - you have to go and perform some simple tasks in front of a judge, wearing a bridle, and more or less behaving yourself in a strange environment. Plus, you get to see the eye candy that other breeders are producing.

The first show was Meadowcreek. After bathing and braiding Pax at home (which she was very good for), we trailered in for the day, parked on the far side of the showgrounds, and tied to the trailer. Pax sort of held it together for the first twenty minutes or so, and then I bridled her and led her over to the showjumping arena, her halter overtop her bridle. I wisely brought a Newmarket shank instead of reins, as I thought there was no way I would be able to hold onto her if I didn't have a longer lead. The rules changed and helmets are now required, but I did not know that at the time - the steward didn't catch me until after the show was over, but oh well. I remembered it when we went to Tyler. Actually it's probably because of horses like Pax that they changed that rule.


I didn't go too crazy with the grooming - I carefully trimmed her bridlepath with scissors, half-assed her whiskers, and left her ears totally alone. I wore a polo but didn't tuck it in, so I didn't really make an effort myself either. Usually I get a little more into it, but I mostly was worried about not dying instead of looking nice, so I did have an excuse!

Walking over to the arena was.... exciting. She had to cross a dirt bridge with a ravine on either side, which was a bit scary. She had to pass a long string of flapping flags, which was pretty exciting for a minute. And she had to stand still while we waited our turn to go in the ring, although I did pacify her with some grazing. At least she was calm enough to do that!

For the FEH, it's basically set up like any other sporthorse in hand class. You stand up for the judge, who goes around the horse and judges conformation. Then you walk the horse in hand on the triangle, and then trot the triangle so that the judge can see the horse moving away and towards them, and also in a straight line past them. The judge scores you on conformation and gaits, and somewhat on behavior too - but mostly on type.

There were a lot of young horses there - six two year olds in my division! That's crazy. And good for the program! Not so great for us though - we scored in the 70s but were still dead last in our division. The judge liked her legs and hind end, was a bit critical of the short front legs and the thicker warmblood type, and didn't care much for her gaits. We also got heavily dinged on her behavior, which was... appalling. There was a LOT of rearing and striking, and we had to trot parts of the triangle repeatedly, because we just could not do it without leaping and striking.


Just a few of the rearing pictures captured. Believe me, there were more.

So, it wasn't a great day, but it went about as well as I expected. It was a good experience for Pax, who had to ride in the trailer alone for the first really long ride she ever had to go on, and had to survive tied to the trailer even though she didn't like it. Not too bad, not too bad.

The second show was two weeks later, at the Texas Rose HT. It's the same distance from me as Meadowcreek, which made for another trailer-in for the afternoon. There were fewer babies at this show but more going on, especially where they had us park. There were horses schooling, horses passing, people and vehicles going by. I think Pax did better with other horses around - where she was at Meadowcreek, she couldn't see anyone easily, which bothered her a bit. She was much quieter tied to the trailer, bridled easily, and led a LOT better than she had at Meadowcreek.

In the ring, she scored about the same overall, but this judge liked her gaits a lot more and her legs less. She loved her hind end and highly complimented her on that. She was a lot nicer than the previous judge too - she asked about her and what my goals were with her, and thanked us at the end. Pax did have one majorly explosive rear the second I tried to trot off - caught on camera, no less! - and when she struck out she nailed me right in the arm. It hurt, but I wasn't injured, and we continued on. I kept her under powered for our trot work, mostly because I did not want to incite any more explosive behavior. She was losing her patience by the end of the class, but walked back to the trailer quietly enough, and then stood there like a champ when we were finished. She parked herself and munched quietly on her haybag for quite a long time when we were done, even when we left her to go to the office to collect our scoresheets and ribbons. We were second (out of two), so we at least got  a piece of satin for our efforts, but overall I was super pleased with how much better she behaved at the second show. Especially the end when she stood immobile and quiet when left tied to the trailer!

The photographer at Texas Rose got some awesome shots of Pax, which I will be ordering and sharing when they come in. For now, you'll just have to wait! 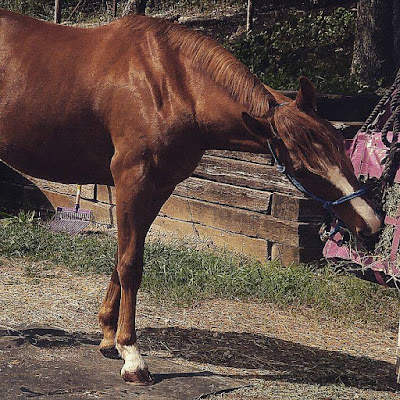 For now, Pax goes back out into the field. She'll get groomed and trimmed regularly, but she's off duty until next year. It's time to just kick back, relax, and grow up. She will be two next week.... can you believe it!