Back to the Grind

After a blip in catchability, one very intense dental session, and a few days of refusing to eat much of anything, Imogen is back to work and doing amazingly well. I can't believe how much better her attitude is already!

Her little bit of time off before and after the dental work did good things for her brain. After I scared her half to death when I slapped her on the chest last week, we stepped back and did groundwork and grooming for a few days. This made a huge difference for her mentally, and I think it is a good default for when things are a little overwhelming for her. Working with an abused horse is very difficult, and maintaining trust in a relationship with a horse like Immy is a critical key. Without that, you have nothing. Obviously, there are going to be times when she needs to be disciplined for something or another (like if she runs me over again!), but she will learn with time that I am not going to whale on her in anger for no reason. It just takes time, and consistency - no surprises, and no deviations. She needs trust that I am not going to do anything scary and out of left field... it just takes time.

Monday: Dentist
Tuesday: Off
Wednesday: Lunge in halter (and P and I went with S to her barrel race!)
Thursday: Off (Future Hubs and I were at The xx show in Dallas... you're jealous, I know!)
Friday: Groundwork
Saturday: Lunge in sidereins

And the next few days will be as follows:

Thursday we have a tentative craniosacral session scheduled, but it might actually happen on Sunday... I have to hear back from the therapist and see!

I can't believe the difference in Immy since her dental work. It just kills me that it has taken THIS long to have it done (months, literally), with all of the scheduling problems (on his end), the no-shows, the problems. I almost bailed on the guy and didn't use him, just because I was so annoyed, but I am so glad I didn't. The first few days following her dental were not so much fun, due to the fact that her extractions made her mouth pretty sore, but she managed to continue to eat the softest, fluffiest hay that I had for that time. She wasn't interested in eating her grain mush until Wednesday evening. By that time, she was back to her old self, but she had lost a few pounds in the process. She was looking amazing last week weight-wise, but looks a little less filled out this week. With her appetite back and her new set of chompers, I expect she'll put it back on quickly.
When I pulled her out for her grooming and lunging session on Wednesday, I had a huge surprise waiting for me. I have a grooming routine that I go through when grooming, and for whatever reason, I always start with my curry on the left side of her neck. From there I go up as high as she will tolerate, and then go back down her neck and onto her shoulder. Usually she raises her head and resists whenever I do this, not wanting me to go near her ears or poll, but nothing happened that time. Literally nothing! The same went for the right side of her neck. When I followed over with my medium brush, she let me groom her poll with NO head raising or reactions of any sort. NOTHING!

You have no idea how huge that is. HUGE! That is the first time she has ever, ever let me approach that area of her body without some sort of resistance. I couldn't believe it. I still can't!
As for our lunge session that day, it was short-lived. The ground had been slick and muddy for a few days following our last rainstorm, and I thought it had dried out enough for a lunge, but I was wrong. She did the slip-n'-slide for a few minutes before I called it, not wanting to cause a wipeout.

Today was her first day back to real work. Once again, I was completely delighted with her attitude - she was calm, quiet, peaceful, and totally amenable to having her head and poll groomed. Bridling her was by far the easiest it has been, simply because she let me get near the top of her head without major issue. In fact, I'd say that was the best bridling she's ever had. (It also helps to have a clear bridlepath to work with... she hates having her mane pulled on!)
Her poos are WAY better as of this week as well... only a horseperson could be this concerned about horse crap! Granted, I did change a few things to see if I could have some improvement there, and they all seemed to happen at the same time (a round of SandClear, the dental, a few weeks on EquiShure, and a secondary probiotic that somebody gave me to try, just to see)... it is hard to say what worked, or what combo of things worked. But, something worked! 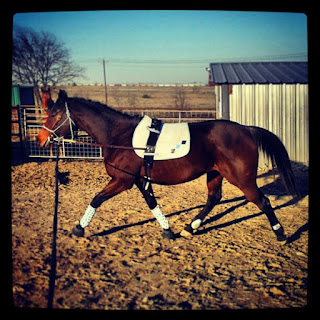 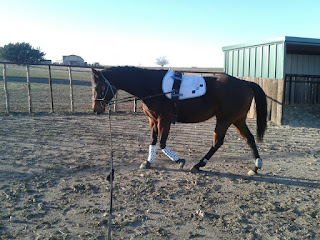 She was excellent today on the lunge. She's still not 100% sure about the sidereins, but she is starting to get the concept at the walk. I'm not one to crank down a set of sidereins to force a horse into a frame... I just want her to start getting used to the idea of contact. Once she is a little further along in her schooling, I will probably never use them again. When lunging my schooled horses, I only really ever use a chambon, but obviously Immy is NOT ready for that yet.

Tomorrow, back to work under saddle!