Well, riding in a rope halter a good idea, until it wasn't anymore.

It really was a good idea, in theory. Let her relax about bridling, give her some time to sort through her issues, do something she understands... right? I thought so too, and I was almost right. She, on the other hand, absolutely did not agree whatsoever, and it didn't take very long to find that out.

I normally don't bother to lunge her before I get on, simply because lunging her seemed to heat her up rather than cool her down - kind of like shaking up a fizzy soda drink before opening it. She had been very hot the ride immediately before this one when I first mounted, so I went ahead and lunged her for awhile before I went to get on her. She looked so cute bopping along in her halter... awww, precious, this is going to go so well, I can feel it! 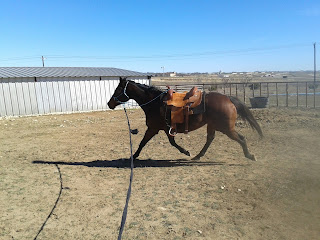 After she was ready, I hopped up on her. She was very good for the mount, and stood quietly until I asked her to move on. She realized suddenly that there was no bit in her mouth, and that the steering actions were very different (even though I had just put her through the motions of flexing and steering from her halter right before I got on), and stiffened up. Uh oh, I thought. Well, let's turn right.... she sped up. Okay, small circles... we're okay sweetie, we're fine... slow down honey, let's just halt for a second... we don't need to rush. I asked for a whoa, and gave her a very slight rein aid for it. Something about that absolutely short-circuited her brain, and she exploded. Barring somebody sticking a cattle prod directly up her nose, I don't think she could have reacted harder - she blasted a snort as she flung her head into my lap, launching into some sort of ninja Mortal Combat capriole, going from 0 to about 9000 miles per hour in less than the blink of an eye. Or, at least, that is what I assume happened - literally from one second to the next, she completely vanished out from underneath me, and was on the other side of the pen before my butt ever even hit the ground. It happened so fast that really don't even know what she did - one second she was there, the next she was GONE from underneath me!

I NEVER fall off. I count myself as a sort of Miss Stickability, someone who can tough it out no matter what... my skill is not quite to the Andrew level, but many years of riding out Gogo's antics gave me a very good seat and the ability to ride out most anything a horse can throw at me. But when she turned on the afterburners and flung her head in the air, man... I guess I was just bested at my own game! Lucky for me, she was just as surprised as I was, and stopped to face me with a big giant question mark on her face. Undoubtedly it scared her, but she allowed me to walk right up and catch her, and I got right back on and tried again.

But that rope halter... oh man. I couldn't touch her face without panic, I couldn't steer, and I couldn't stop. Once I was back on board, it was all I could do to just sort of hold on and wish that I hadn't had the nerve to try again. I had thought that the lighbulb would go off and she would get it, but she was having absolutely none of it, at ALL. Somehow, I managed to get her into a corner of the pen long enough for her to stop moving, and I got off. I felt a bit like I was risking my neck, and I didn't want to get launched for a second time. Instead, I went and pulled out my backup, a simple bridle that T (S's husband) had rigged up for me. The simple bridle involved nothing more than just a headstall and a rubber bit with a slobber strap, and that was it. She loves my mullen mouth Happy Mouth, so we figured we'd give this a shot - there wasn't any guarantee she'd accept this headstall any better than she had the other one, but it was worth a shot. 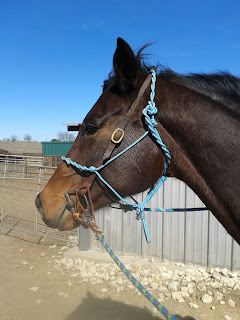 Lo and behold, getting that thing on worked great! All I had to do was unbuckle it, put it over her neck, shimmy it up behind her ears, and put the bit in and buckle. Voila! No fuss, no panic, no nightmare. Unfortunately, she did NOT agree with that bit in the slightest, and I did not have much in the way of steering or brakes. I walked around for a little while, did some circles in both directions, and called it a success. Back on the ground, she was as cheerful as ever, the cheeky monkey. (Which I am thankful for... she could be terrified of me as an alternative!)

As for my poor, poor butt, it did not come out of this ordeal unscathed. I have the world's most magnificent bruise, and a HUGE, hot, squishy goose egg from where I probably landed on a rock. Thankfully, it doesn't seem to be clotting or getting hard... gross. Hematoma FTW! 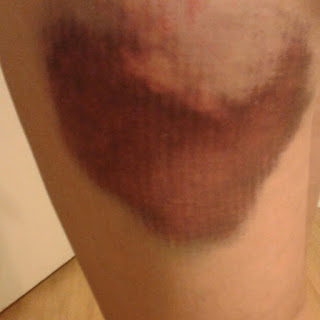 And that is from yesterday. You should see it TODAY. 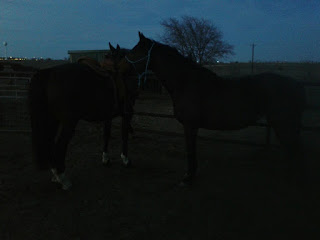 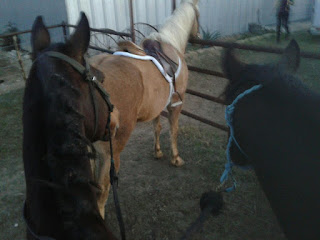 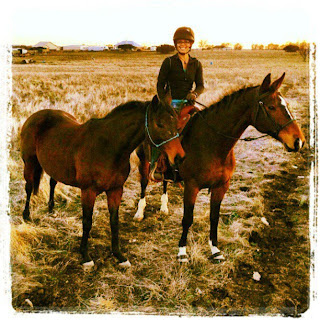 I didn't feel all that awesome the next day, but it was great at the time!

Up next: January goal recap, February goals, and Immy gets ponied under saddle for the first time!