FINALLY! After waiting for what feels like an eternity, the dentist FINALLY CAME!!

And... it was bad. I knew it wasn't going to be pretty, but I figured that perhaps it wouldn't be as horrible as we expected, seeing as she probably has been out eating hay and doing little else for a number of years.

I was wrong. Very, very wrong.

I liked the dentist, and he did a good job. He was gentle, kind to her, didn't keep her head elevated for longer than he had to, and didn't keep her in the speculum for lenthy periods. She was sedated heavily, of course... definitely not sure this could have happened properly otherwise. Not everybody likes to sedate for dental work, but I honestly think it is a far better idea. Better to knock them out than to have them clamped up rigidly and fighting you the entire time... they get super sore super quickly.

The first thing we found when we opened her mouth was her age - he estimates her to be turning approximately 8 this year. Good news! He also noted how seriously long her incisors were - not a good sign. Next we found that she still did in fact have her wolf teeth, just two little top ones, and both of them were broken - a good sign that she's likely never been floated before in her life. He extracted them both, and then gave me a good look at what exactly was going on in there. HOLY CRAP. She had two broken premolars (slab fractures, in 308 and 408), opposing issues with the teeth above them, GIANT hooks on both front top premolars, multiple SUPER sharp edges, tons of cheek lacerations... gee, I wonder why she ever got to be so headshy? (Obviously the abuse did that, but for real, I bet her teeth hurt like hell!) It was a total nightmare. 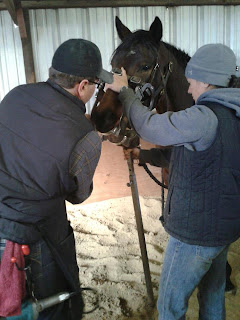 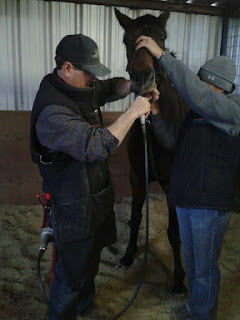 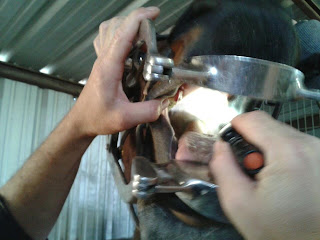 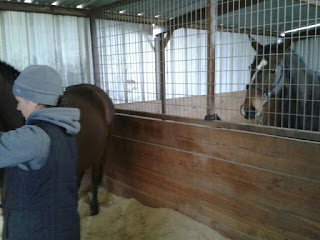 (P-mare says, wtf are you doing to my sister!? She was there for moral support.)

The float took awhile, as expected, and she started to wake up near the end, but she managed to hold it together. Bonus for me - she was still out *just* enough so that I could scissor a bridlepath off! I also pulled the top part of her mane, although she was none too pleased about it. I tried to break out the clippers, but that really woke her up, and she bolted to the end of my leadline and stood snorting in the corner of the stall. Okay, guess not today... we settled for a little muzzle shave with a hand shaver instead, which she more or less tolerated. Of course, afterwards, she associated me only with the terrifying clippers, and once again bolted off and refused to speak to me again. She also refused to eat basically anything, which did not surprise me. It must feel awfully weird in there, not to mention probably super sore from the extractions.

The next day, she felt better, and ate a little bit of her mush for breakfast. By the afternoon, she was quite willing to talk to me again, but still wasn't all that interested in eating, so I left her with her food bucket while S and I went and rode Rue and P out on the trails. It had torrentially poured the night before, so everything was sloppy soup, but we made it work. The horses had quite a scare when we stumbled upon a terrifying set of emus (seriously, who had pet emus at a construction site? They were just wandering around at one, nonchalant!) P had such a fit when she saw the first emu that she ripped clean out of one of her Italian bells... those things are tough, how do you tear them clean in HALF?

Back at the barn, Immy had not eaten one morsel (so worried about P being gone.... I've been making efforts to separate them every day no matter what, because this is ridiculous!), so I gave up and let P finish it for her. By the next morning, she ate about 90% of her grain-mush, and by yesterday evening was back to licking the bowl clean. Phew! I can't really blame her though, having seen the state of her mouth - it was horrible.


I had an amazing surprise yesterday, when I went to brush and lunge her for her first day back to work post-dental - she let me brush the top of her poll with NO issues, NO head raising, no nothing! She usually permits me to do that, somewhat unwillingly and with a raised head - she's not very keen on it, but it gets done. Yesterday, on both sides, she let me do it and get that close to her ears without even thinking about raising her head!! That is the FIRST time that has ever happened. Either in her drugged stupor she just accepted things being up there, or she feels that much better after the dental. AWESOME! (She's obviously not cured of her headshy issues, of course - but this is a huge step in the right direction!!) It was too sloppy still to lunge very much, but we did a little work, and then called it a night. S came down and decided that she was going to a barrel race that evening, and for kicks we decided that I would go too and bring P - not to race, of course, but just to ride around. What fun that was - P took the whole thing in stride while wearing nothing but a rope halter while I was riding around, goats/steers/bulls/calves/swinging ropes/screaming cowboys/millions of horses and all! Next time, we are going to bring Immy along to pony off of P - what better way to expose her to a WHOLE bunch of things while still having her calm and confident buddy right there? It's perfect!