If I had set out to find P's complete opposite when I was searching for a new horse, I would have perfectly  found it in 'the old' Imogen. (I was obviously not looking for a different personality, nor was I looking at all... but that's what I found!) 'The old' Immy, when I first met her, was a nervous, skittery, panicky, terrified mess of a mare, but I knew there was more to her than met the eye.

Those of you who have been following this blog since the beginning will remember how things started out with Immy, who was then simply named "Bay Girl." To quote the very first blogpost I put up on her....

"The story of The Uncatchable Number 267 begins with a moment in history without a past. The first time I laid eyes on the mare with only a number for a name, I thought, "Wow... that mare is so pretty. How did she end up like this?" I was in a golf cart at feed time, grain buckets in hand, riding around with the summer girl whose job I was taking over. "She's really skittish," she told me as I dumped her grain into her bucket, watching the mare snort warily at me from a distance. "I don't really know much about her."
Neither did anyone. All that we knew about the mare was that she had come from an embryo transfer program, and was carrying the foal of a recently deceased mare. She came with the number 257 as a name, and also had this unceremoniously branded onto her left buttcheek. We took to calling her "Bay Girl," as anything was better than a number for a name. She was half-wild, uncatchable, and unhandled. She kicked when you pick up her feet, she couldn't be haltered (and instead had to live in one with a catch rope), and she flinched away from human touch. She was also absolutely drop dead gorgeous and a lovely mover... which you often got a good glimpse of while she was running away in the opposite direction from you.
We didn't know her breed, her age, her history, or anything about her. One thing was excruciatingly clear however.... someone at some point had been very, very mean to her. When all you are to the world is a uterus, no one cares enough to handle you with any sort of care or compassion.
I handled Bay Girl a few times over the following few months, but never for anything pleasant (here, let me give you your vaccines... let me shove dewormer down your throat.... let me hold you while we heavily sedate you for trimming...). The turning point came when all the horses came into the barn for the night due to bad weather. She lives outside in a halter with a catch rope, and we took her halter off just to see what she would do when we had to put it back on in the morning. Not surprisingly, she wanted nothing to do with it. Anything from her cheeks forward is apparently off limits for human hands in her mind, and anything near her ears and poll as well. I managed to somehow get my hand over her nose (which resulted in a lot of head tossing), and after she had backed up twice around the stall with me at her nose, she finally stopped and I somehow got the halter on. I think if I hadn't been the one feeding her for three months prior to this event, I would have never been able to even lay a hand on her, even in a stall. At this point, all I could do was feel sorry for her. How on earth did such a nice mare end up this way? She deserved so much more.
I asked my boss if I could handle her. She said yes."

And thus, history was made. The only human contact the mare had ever really had was for quick, mean moments in time, and not surprisingly she wanted nothing to do with people. She lived alone in a small pen in a catch halter, and for the first two months that I knew her, I was her primary feeder and not much more. When I first started to work with her, she knew me as the food lady who hadn't been mean to her, and she started to allow herself to be caught and handled. It wasn't long before she started to wait at the gate for me, and slowly we progressed from there.

It wasn't easy. She was terrified of having her feet handled. She needed to be sedated for farrier work. I couldn't crosstie her properly because she was so afraid of having her face touched. Getting a blanket on and off her for the first time was a huge and terrifying ordeal for her at first. She couldn't even deal with having her mane brushed, she was so afraid of hands coming at her. Everything I did was subject to scrutiny, and her default reaction to anything questionable was to panic and bolt. (Surprisingly, the second she would hit the end of her lead rope, she would stop and stand still - she was very, very smart despite her fears.) And yet, despite her reactions, she surprised me with how smart she was. She picked up new things incredibly fast - one time and she understood, so long as it didn't scare her the first time. And absolutely nothing in her surrounding environment scared her - she wasn't spooky in the SLIGHTEST. The only things that scared her were humans.... she just didn't trust anything they did.

Slowly, over the course of time, she learned about things. She learned to deal with halters and flymasks being put on and off (something she still struggles with). She learned about blankets and having her feet handled. She learned about baths, hairdos, leading, crossties, and hard tying. We didn't get to do much when she had her colt at foot, but once he was weaned, I started to work with her on the ground and on the lunge, and it wasn't long before she was lunging in both directions on and off the line. She wore a saddle pad with no problems, wore a surcingle with no problems, wore a bridle with no problems.... she was very, very easy to start! Bridling in and of itself was very difficult, seeing as she was extremely headshy (she still is), but once on, she had no problems. Around this time, thanks to all my AMAZING blog readers, we had collectively saved up enough money to buy her, and I brought her home in November of 2012. It didn't take her long to start wearing a saddle, be ponied off of Pangea, and start grounddriving. At the very end of December, I sat on her for the first time, and it was like a dream come true. She was a little sensitive and nervous, but once she figured it out, she settled right in. I was on cloud nine.

Now, a few months later, she is walk-trot-canter under saddle, going on trail rides, and starting to ride out alone in the big field (SUCH a big deal and she loves it - she drags me away from the barn, I can hardly make her go back!). Once she was meek, quiet and reserved, but not anymore - especially since the introduction of O-Ren into the herd, she has become especially bold, barging her way to the front of the line for snacks, food, or attention. She is still extremely body protective, and can be hypersensitive to touch and to stimuli (we've tried to address this as a possible magnesium deficiency, but hyperloading her with magnesium hasn't helped, nor has chamomile and a calming supplement... I think it's just her personality!), but it has definitely improved. She is still very headshy, but it is also improving.... it's just a very long road. I still have to be cautious with her when she is moving free in her pen, as she is very reactive to being approached from any direction that isn't from head-on - we've reached an agreement where I leave her alone when she is loose in her field on her own time, and she comes to me for interaction and for meals. (Since she is always the first one to the gate, this isn't ever a problem, but it does make for an interesting relationship. She comes to me for everything, but if she doesn't come to me, I don't chase her around. She makes the choice to interact with me - I know better than to run this mare around and force her to be caught. I can't imagine EVER doing this with another horse - with any other hard to catch horse, I'd set them to work until they decided to be caught, but this completely backfires with this mare and only makes her want to be with people less.)

She is unlike any horse I've ever met.... so smart and bold, yet so reserved and sensitive at the same time. One moment she is cuddling, and the next she is backed off at the end of her leadline. She trusts me, but she is still waiting for me to do something bad to her... her abuse went on for so long and is so deep-seated that it has molded who she is today. She has changed SO much over the course of the past year that it is impossible to say what kinds of changes she will continue to go through over the course of the next year, or the next several years. She is one of a kind, and she is wonderful. She is so very challenging in that I cannot treat her like any other horse on the planet - she is so very 'special needs' in her care, and is so emotionally delicate. But she is changing every day, becoming bolder and sweeter and stronger, and I can't wait to see where she is 6 months from now, a year from now.... one thing is for sure, she'll be more beautiful than ever. 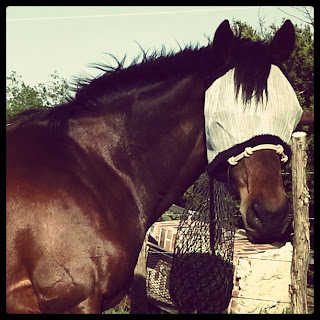 Email ThisBlogThis!Share to TwitterShare to FacebookShare to Pinterest
Labels: personality