Thank you everyone for your kind condolences about Ti. Losing her was very hard, and I've pretty much been a blubbering mess all week long. I wish it had all gone down differently, but there is nothing to be done about it now. Mostly I wish that we had been able to give her a better final day... we weren't even home for most of it, and when we did get home we immediately whisked her off to the vet because of her blazing fever. It was the clear thing to do given the grave circumstances, there was nothing else to be done... I just wish it could have been better, a day full of cookies and love. There isn't any use beating myself up over it now, but I am stuck on it a little.

Anyway, back to more cheerful things.

O is truly driving like a champ. Last week I posted a video of her trotting down the road, her first off-property drive. She got her motor on, and trucked on down the road at a trot like a little machine. Braying donkeys, running dogs, cars.... none of it bothered her. She just put her head down and went to work!
We also tried to go in the little field across the street where all of our jumps are, and this is where we had problems. The field is a lot bumpier than I thought, and we weren't able to do anything faster than a walk. As we were passing by one of the jumps (that she hadn't seen before), she gave it a hairy eye and suddenly spun on her heel, whipping around in a 180, spinning the cart with her. I was thrown forward out of my seat onto my knees (I did have a helmet on thankfully), but she stopped immediately with a whoa. I climbed back into my seat, and we continued on without any further spooks, but it got me thinking. She has literally never once spooked before like that - I had no idea she had it in her! I've felt her hesitate under saddle before, but she hasn't ever done THAT before. The only thing I can think of is that when I am on her, I am diffusing these kinds of spooks subconsciously, before they even happen. Even just being able to put my leg on her would have kept her from spinning like that, I'm sure of it. I think she probably just didn't have a blocking aid (like leg/seat), and it allowed her to escape out the side door, so to speak. In the future, I will have to keep a closer eye on these kinds of situations, now that I know she actually is capable of doing them.

Aside from that one thing, she was awesome going down the road!

She had several days in a row off while we were on vacation and then grieving for my pup, but we got back to work on Tuesday. We stayed in our upper field, and worked on taking a nice contact and bending properly. Driving is kind of like doing dressage via an out-of-body experience: you're technically doing a lot of the same kinds of things - taking a contact, half halting, bending properly, balancing laterally, lengthening and compressing, and using whip aids like you would leg aids to isolate certain parts of the body - you're just behind the horse instead of on top of them. As such, I suppose it is no real surprise that O has the exact same kinds of resistances while driving as she does while under saddle (which of course sounds like a duh thing, but I didn't really think about it!). Under saddle, she is quite easy to bend to the right, but tends to be very stiff to the left and prefers to dirtbike around turns with her head to the outside and her shoulder popped to the inside. No surprise that she does the exact same thing while driving! I realized I really need to get her used to the blinders so that I am able to use the whip at her shoulders - blinders needed to become a priority, instead of work in the open bridle.

Yesterday we spent probably 45 working pretty unsuccessfully on the ground with the blinders and the whip at her shoulders. I needed to a) make sure she isn't going to kill me/bolt when the whip is used on her while wearing blinders, and b) start to teach her to move her shoulders with the whip aids. Unfortunately, O is still the stubborn beast that she always has been, and when she decides she isn't into whatever we're doing, she sulls up against it and says NO F YOU LADY. NOT MOVING OVER. We'd get a few steps of over, we'd walk on, and then the next time I asked she would lock up and gnash her teeth and absolutely refuse to move at all. This is nothing new... this is basically every session I've ever had with her where there was a whip involved, which is why I use it so infrequently. Kind of like with flatwork, she had some sort of funky mental block about it, and she completely shuts down. I can touch her all over with the whip, it doesn't scare her per se... she just absolutely hates it being used on her in any way, and blocks it all out - you might as well be tapping a brick wall with your whip. Eventually I got after her about it, and she spent some time lunging with the long lines around me in little circles, really exaggerating her bend to the left and spiraling in and out on the circle. She was thoroughly ticked at this point, but the trotting chilled her out, and when we went back to walk work I had a very light and responsive horse. I decided to hook her up and go for a drive, and ditched the whip completely.

After all of the suppling, exaggerated bend, and spiraling in and out on the circle, I had an exceptionally light horse, one that went smoothly forward, had balance going in both directions, and could bend properly without any dirtbiking. I'll definitely be consulting with the trainer about whip aids, because I feel at a total loss as to what to actually do about this problem, but for now I think it's probably a completely reasonable (and much more productive) thing to supple and warm her up on the ground first, and then go for a drive afterwards, when I have a better balanced critter on my hands. That will probably get me a LOT further at this moment, until I can figure out how to stop floundering around uselessly with the whip. 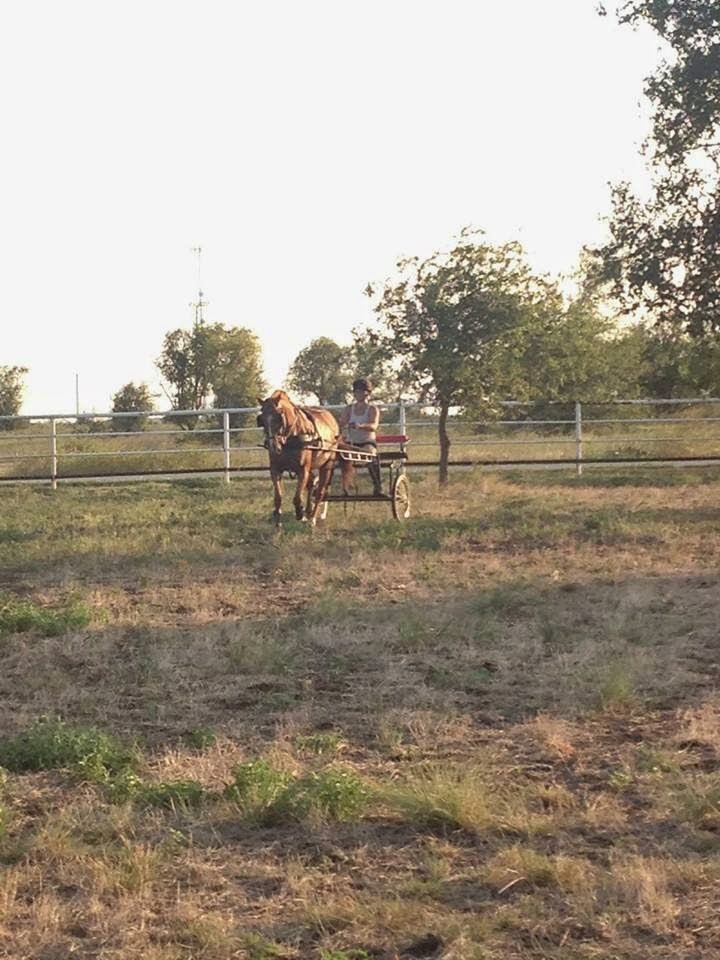 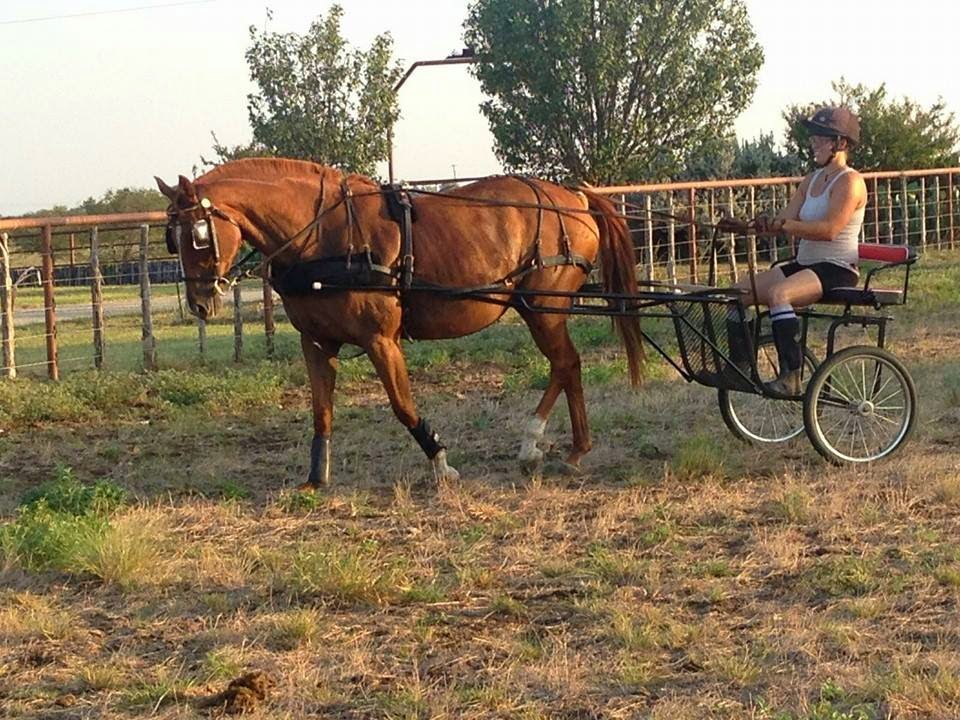 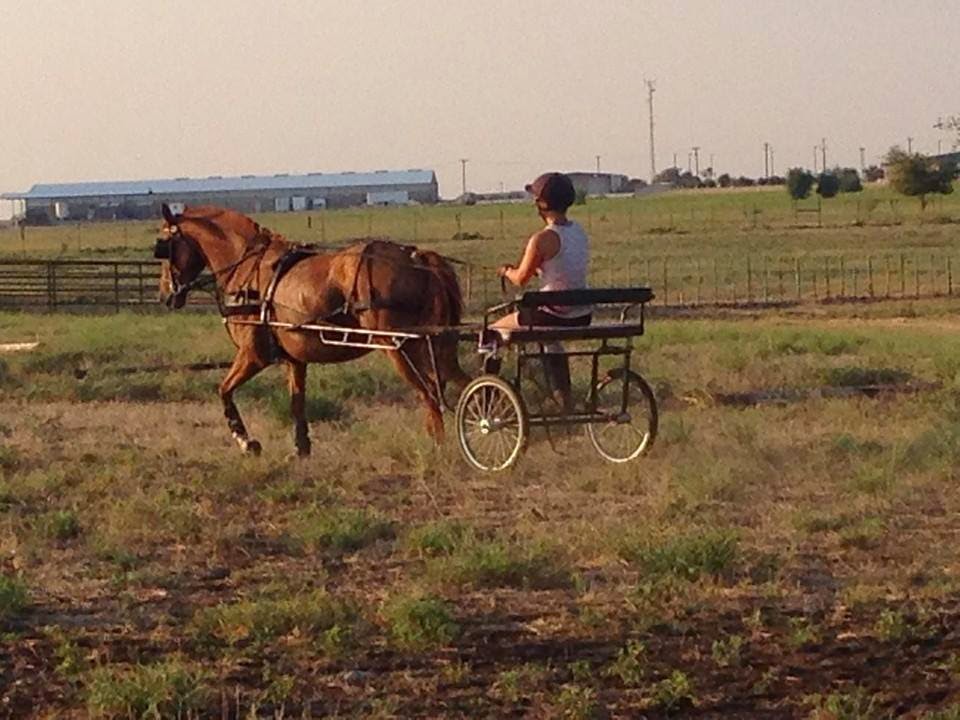 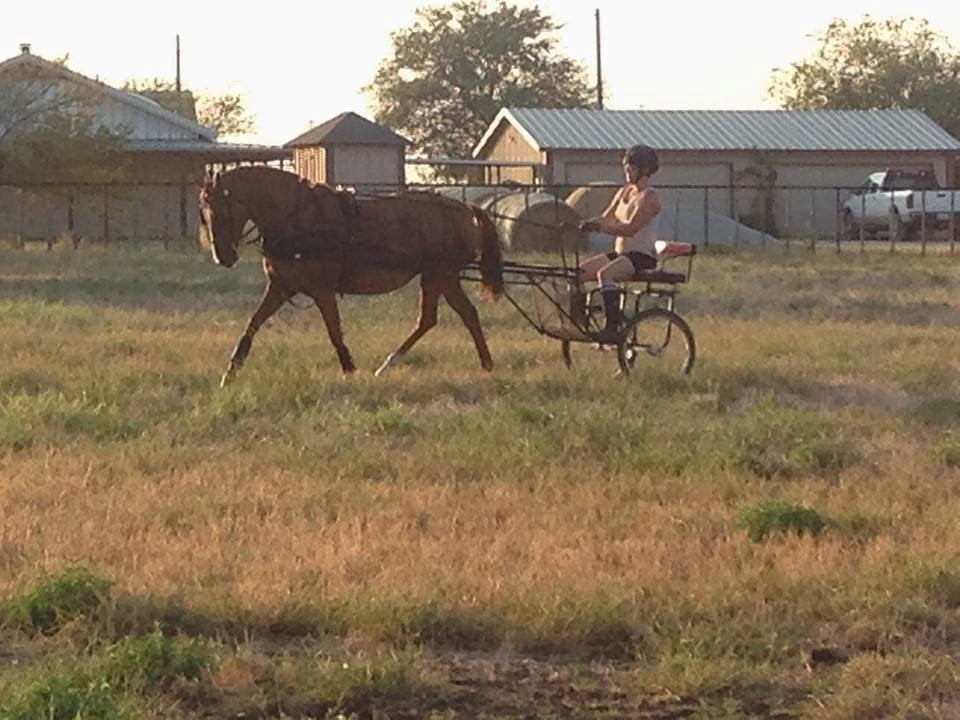 Considering that this is only her 9th drive and her first time driving with blinders, and that I don't actually know what the heck I'm doing, I think she is looking great. I made a few adjustments to the harness, namely letting the traces out one more hole, and I think that helped the cart be in better balance with her. One thing I didn't really expect when starting out is that there is no being an idle passenger when you're driving - you have to ride along in balance with your cart. If you're sitting too far forward or back, you put the cart out of balance, which I realized pretty quickly. I'm sure it is very different in a four-wheeled vehicle, but in a two-wheeled one, you better sit up straight. I had no idea until I found out firsthand myself!

I'm gonna go out on a limb and say that I have some of the classiest barn outfits on the planet. And we're definitely both on a diet... either one of us could pass for a prize market heifer right now.