Well I'd say that went pretty well, don't you think? 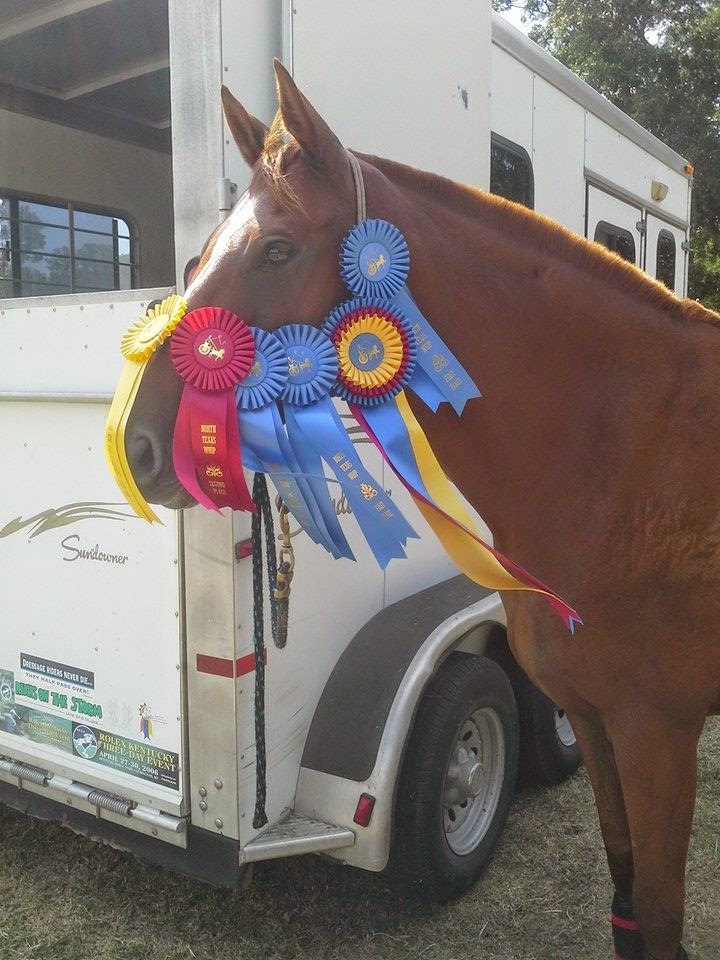 Couldn't be happier with my little red beast right now. She was a CHAMP yesterday, even with some blips in behavior!

The day started out very early, as I needed to bathe her and make sure we arrived at the facility in time to let her look at all the minis and other horses that were already hitched. You never know what they're going to do the first time they see a) a tiny demon midget horse, and b) a rattling wooden monster chasing other horses around. She stood like a champ for her bath, as per her usual, but right as we were going to load up, our neighbors started shooting at decoys. It was 7:30 in the morning! She normally doesn't care about this much, but the noise and the idea of having to load on the trailer and go somewhere set her ablaze. She pranced, jigged, snorted, and bounced around when loaded. Really mare? It's not like we haven't done this a million times before..!

Once we arrived, she unloaded and stood tied like her usual self, surveying the surroundings and casually munching hay: 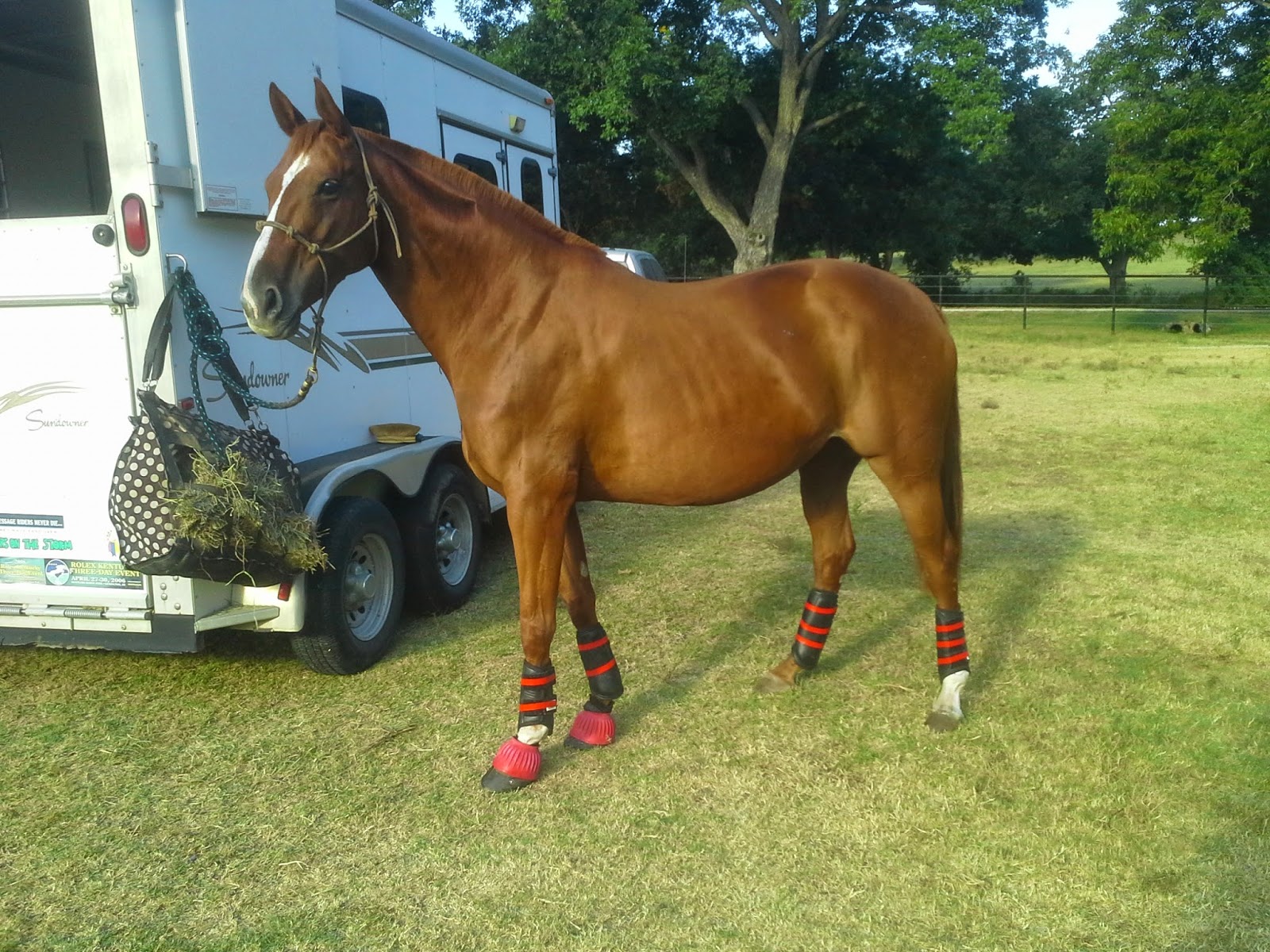 When the minis began to arrive and unload, I took the opportunity to walk her over and let her take a look. The first one she saw was a little tiny stallion who started screaming bloody murder when he saw her. Poor mare had no idea what to do with herself at that... she skittered sideways and then stared at him with giant bug eyes. A few more passes by him and she relaxed. Phew...

..... BUT THEN, the minis hitched up and started DRIVING around! Not only were they tiny demons, but they were tiny demons with rattling monsters strapped to them! Quelle horreur!
At this point, I was harnessing her up as well, and was a bit concerned that stream of hitched horses passing by might be a bit much for her brain. She stood like a rock while I was putting her too (and I'm eternally thankful that I taught her a long time ago to stand like a rock for everything in the world), and just silently absorbed the scene. When I got in the cart, however, she had a complete brain fart and threw a hissy fit - she forgot how go forward or turn, and stood there for a minute prancing in place, and throwing and shaking her head. She managed to get herself together, but she was a right fool for the next 30 minutes or so - she could not stand still, and couldn't whoa without pitching a fit. I just set her to walking and trotting around for that entire period, letting her look at all the other horses and ponies, and just tried to let some steam off.

Our first class was GREAT! It was the cones and barrels class where you have to go through four sets of cones and around one barrel, first one way and then the other, and I felt confident that it would be the easiest class. She had managed to settle a little by the time we got into the arena, and she zoomed through the pattern like a champ. We even slung dirt with the cart on the second trip around the barrel. We hauled butt on home to take first in that class!

Our second class was the keyhole, and it wasn't as good. She behaved herself, but they had set the barrel turn VERY tight, and we barely made it around both barrels. We actually smashed headlong right into the first barrel and knocked the cone on top over, which was total driver error on my part, but O didn't bat an eye and we continued on with the pattern. She was not very amused with the tight turn, and slung her head around as we went around the second barrel. (O is a bonafide head slinger - she almost broke my nose the first few times I rode her, every ride. I rode her almost exclusively in a running martingale for a long time, then when she was better I removed it. She would go for awhile when she would be perfect, then inevitably at some point she would realize there was no martingale and the head tossing would begin again. She checks out physically fine - it just seems to be an old habit that she reverts to at random, when she is either frustrated or feeling particularly exuberant. She did it in every discipline I ever rode her in, and does it whenever she is frustrated about things in the barn, like if I am turning her sister out before her and she is still tied. I started driving her in a martingale right off the bat, and just recently removed it. She had been doing perfectly without it, but I think that the cranking turns were too tight in that pattern and it made her mad!). We made it back to the finish without incident, but now that she knew she had the freedom to express herself with headslinging, I knew it was going to be a problem for the rest of the day. We finished third in that class, even with the time penalty!

She managed to hold still until the next class, probably because she now was able to divert her energy from moving her feet to slinging her head around (she'd stand there and at random just throw in the head toss, like a goofy Arab). It was another cranker turning course called Coney Island, where it was basically like a poles class with two barrels in the middle that you had to turn. She was great for it, but tossed her head all the way through, and we finished second.


At this point, we had a break for lunch, and I unhitched and let O hang out at the trailer eating hay. She was mellowing out at this point, and being able to stand around dozing and eating for an hour did her brain some good. The cones course looked complicated but definitely doable (the cones were set REALLY wide!), and when lunch was over and we were re-hitched, I had a much mellower and more pleasant horse. Inbetween the final two classes, I was even able to park her up under the shade of a tree and relax in the cart for about 15 minutes, chatting to the drivers next to me while O napped with a foot cocked in the shade, even with other drivers passing us by. What a good girl!


Not bad! You'll see a few errant head tosses in this one, most noticeable when she wants to break to the canter and she gets told no. She also did a little happy bounce at the very end!

Finally we had the poles course, in which I had a very strong zoomy horse coming back through the pattern on the way down:


In both the poles class and the cones class, we were first. That meant we were the Horse Division Champions!!

At the end of the show, a few of us decided to go drive out onto the XC course and school the water. O, as always, was a champ about the water, and while she looked down at it to make sure it really was water and not a pool full of battery acid, she then walked straight in. We walked and trotted around through the water complex for a few minutes, and I let her trot off and around the field a bit. At this point, it occurred to me that she was being VERY strong and zoomy, and I finally realized why. O is very much like a racehorse in that the more you pull on her face, the harder she pulls back and the faster she runs off. She loves a soft, light contact, and she'll take a soft, light contact right back if that if what you give her. All day long, I had been pulling around on her through all of these patterns, and definitely NOT being as light with her as I usually am, and she was clearly letting me know that she did NOT appreciate the firm contact. In the videos, you'll see her neck is a bit short and she is constricted, not at all like the last video I posted of her where she was quite light and loose in her neck. Duly noted, mare... note to self, get out of the mare's mouth and let her do her job. She turns light as a feather and has a mouth like butter if you have hands like butter. If you have hands that are hard and unforgiving, it's like trying to turn a brick wall. The mare doesn't suffer fools! 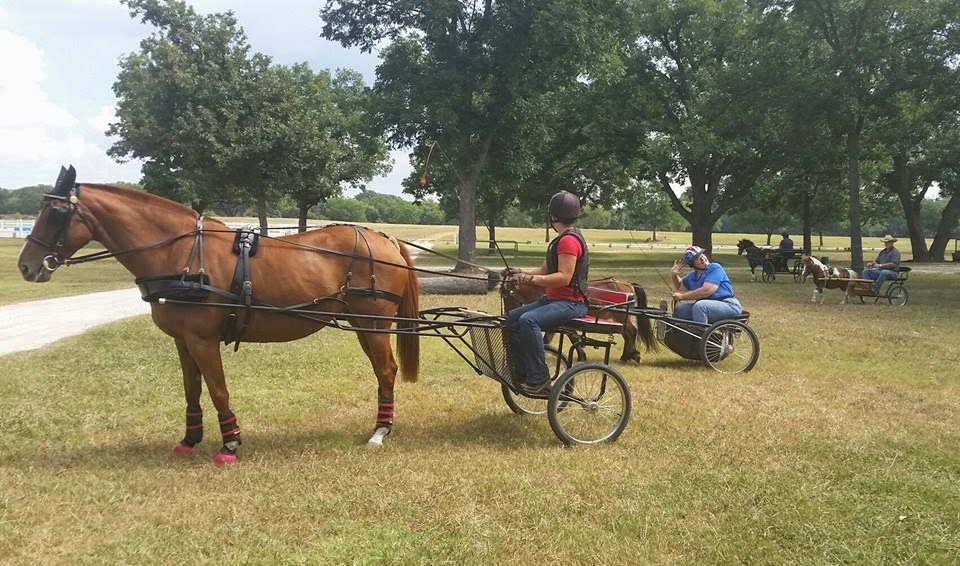 Haha I love this picture. Photobombed by a VSE and his driver! 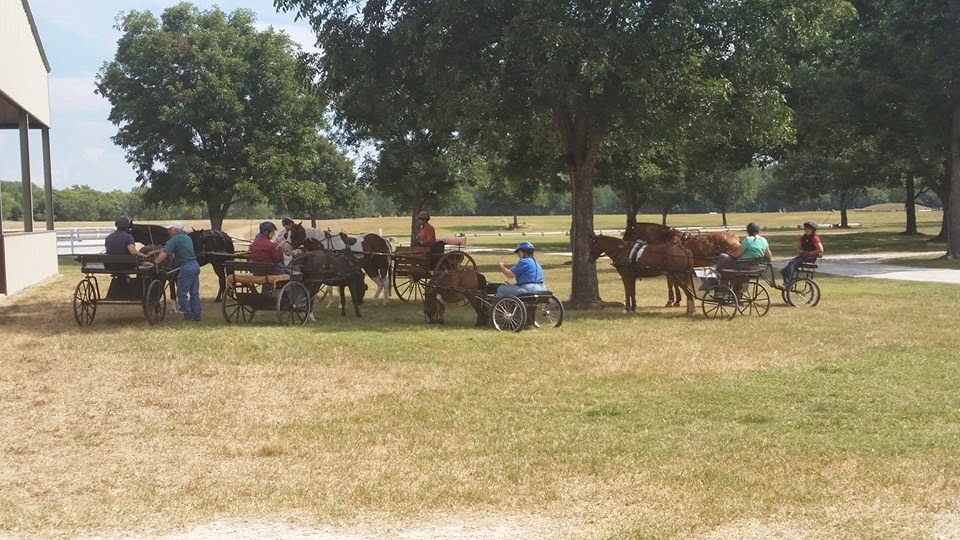 A bunch of us hanging out in the shade. We're on the far right side behind the chestnut pony - you can see me propped up relaxing in the cart while she dozes. That's my girl!

All in all, a very successful show. I learned a lot, had a ton of fun, and was very, very proud of my red beast! There is another Games Day in November... you can bet we'll be there!