It's been a long time since I had a real countdown to a rated show. Like, a long time. A really, really long time! I think the last rated show from any discipline was the 2009 AECs. Everything I've done since has been schooling shows, no national organizations involved. That's all about to change! (And of course, by rated I mean ADS sanctioned... 'rated' being the catch-all term for a show sanctioned by the national mother organization.) I haven't really even had the ability to blog about my prep work yet - I've had little ability to prep yet so far this week, which has been super hard.

I am feeling pretty dang nervous for this show, I'll admit it, although I am feeling relatively in control of my pre-show checklist. It's SO hard to go into a brand new sport - there is SO much to learn, so much to remember, and so much that is still confusing to me. I know exactly what to expect from USEA or USDF shows - hell, even rated h/j shows, from the handful I've peppered into my regular show schedule over the years - but the ADS is an entirely new thing for me. ADS, like many of the other major US sport organizations, is under the USEF umbrella, and like the other major sport organizations, it has an extremely lengthy rulebook that covers each sect separately (pleasure shows, combined driving, etc). There is SO much information in there, it's hard to get your head around it. I like knowing the rules - I hate being left in the dark on things - so I have spent a lot of time pouring over the rulebook and committing things to memory.

That said, I think I have things mostly under control. We did go ahead and put O on Altrenogest, so we don't have to worry about any, erm... hormonal upsets. That's a large load off my back... she was due to come back into heat this very weekend and I was not looking forward to that one bit - especially since she'll be stabled behind a gelding who was only just recently cut!

I installed my chrome rein rail a few days ago as well. Considering the fact that I am about as handy as a cream cheese bagel, this is just as much of an accomplishment as the winch install was. But it looks AWESOME! 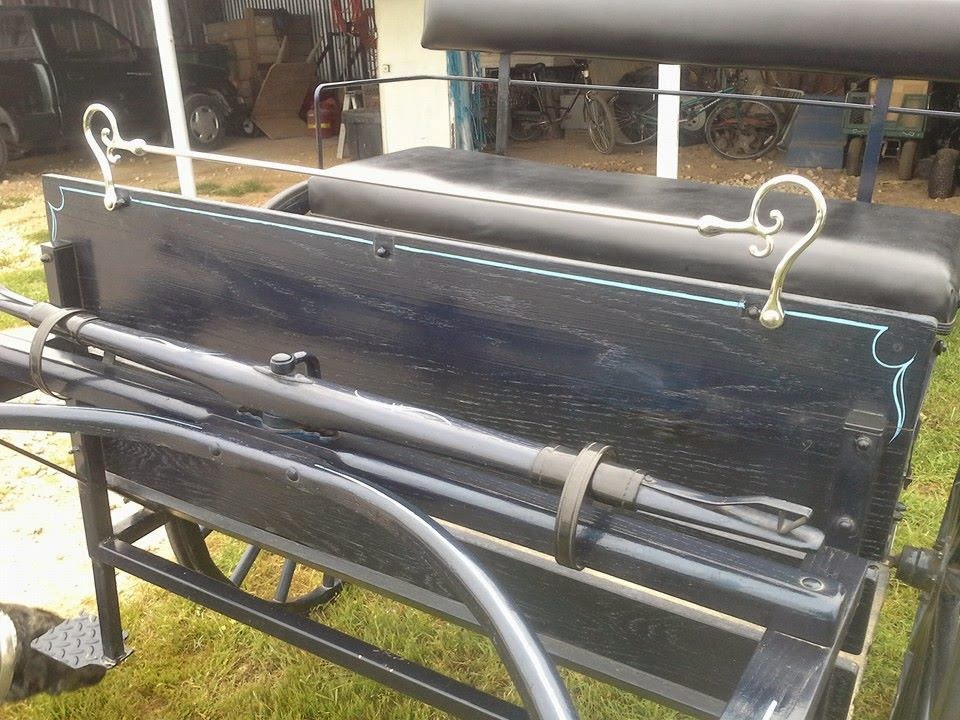 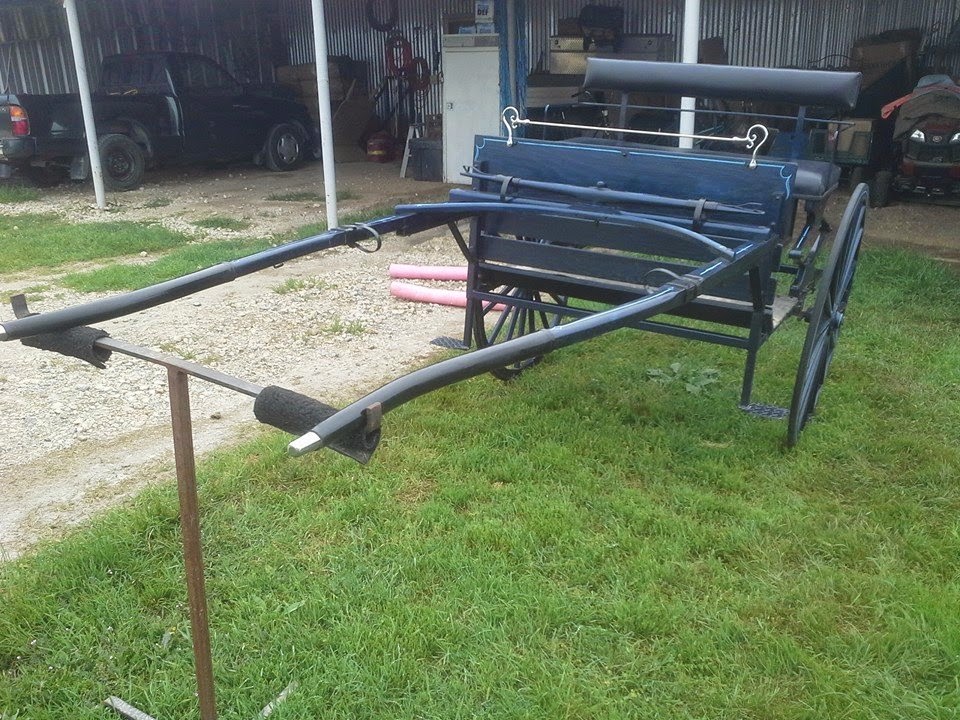 For reference; this is what the old one looked like:

I put all of the original bolts back into place and painted over them. When I have more time, I can putty the holes and pain over them again - I just don't have that kind of time right now though. Nobody will notice at an HDT, especially not with the presentation portion being assessed during the actual test itself. They do inspect your gear before your dressage and your marathon, but they're looking for things like safety issues, not your lack of style.

We had our final drive today, after several days off - it's been raining and we've been stupidly busy. O was a wonderful lady, solidly putting in a few relaxing miles on a nice contact before we headed back to the barn. A few days before a show, I always tend to get a little nervous, and rather than drill my horse in their dressage work, I opt for lighter things like hacks and conditioning workouts to keep them fresh - and to keep me from letting my nerves get in the way and start up with the nit-picking. Tomorrow, she'll be lunged, and we leave Friday afternoon for the showgrounds. 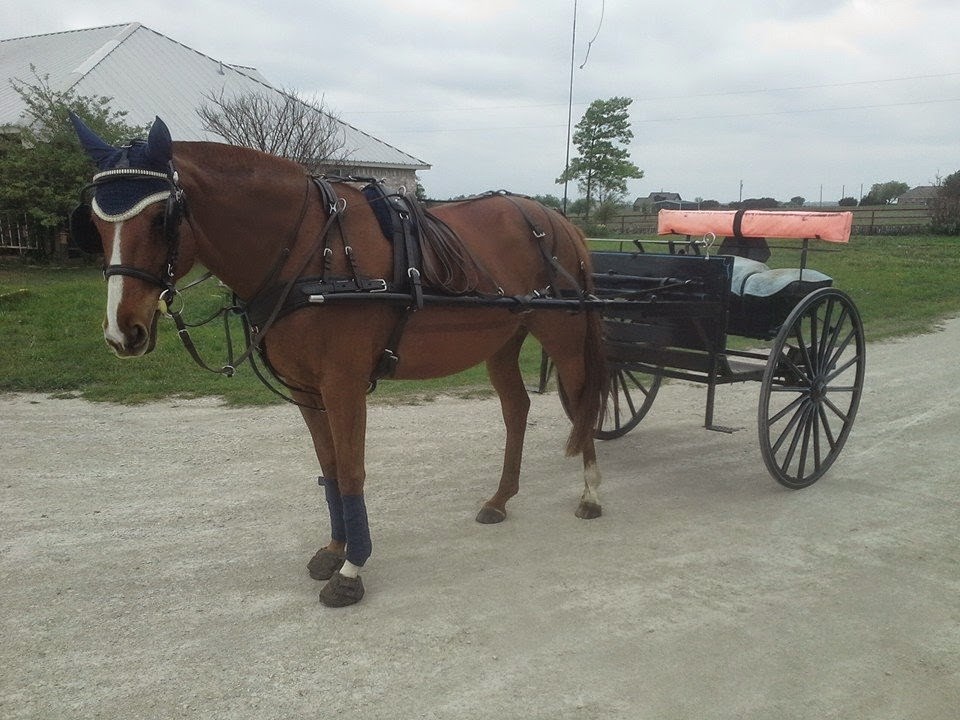 I made a few adjustments to the harness and I think everything is sitting well now. I raised the tugs a little bit, and was pleasantly surprised to find it made it ride much smoother - way easier to balance it while in it. I also stuck my saddle pad back on just for schooling purposes - we'll remove it for the dressage, but I think it is worth it to use it during regular schooling at home. Between the new ear bonnet, the new rein rail, and the outfit I'll have on, everything will look mighty nice at the show.

Today I cleaned out my trailer tack room, printed off all the show info, fixed my winch issue, had my trailer spare repaired, drove O, did barn chores, and cleaned my harness. I'll admit, I'm pretty sold on my synthetic harness now - it was stupidly easy to clean. All I did more or less was hang it on a gate, turn the hose on, and spray it down, then wipe it clean. Voila! It took me less than 10 minutes and it looks brand new again.

Tomorrow I need to: pack up all hay/grain/buckets/haybags/etc, clean out the back of the trailer, get shavings, clean my cart, clip/trim/tidy up O, and probably get some raingear because there's something like a 90% chance of rain on Saturday (awesome). Among many other things... there's a lot to do before we leave on Friday!

Thankfully P (who is at day 335 today) looks like she's going to hold out on us until at least next week. She finally has fluid in her udders (FINALLY!), so I have been able to test them. The fluid is in the water/sticky amber colored stage - far, far from milk - and is nearly off the charts on the pH scale. That means we still have a fair bit of cooking left to do, thankfully. Cook all you want, baby! Don't come out until next week! 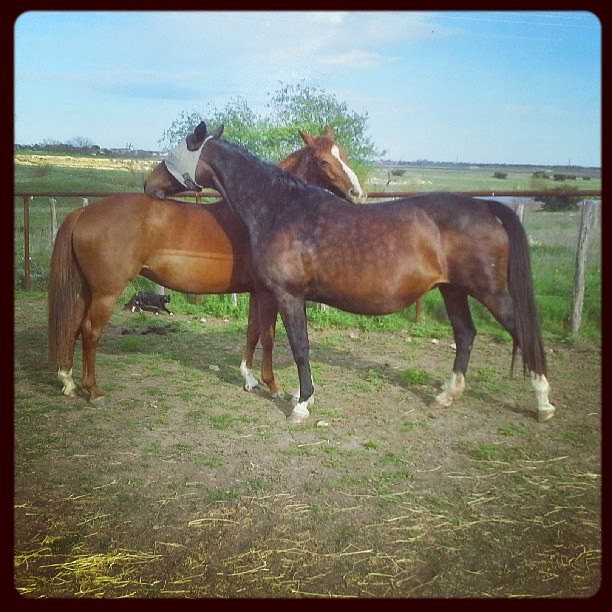