In Which B2 Drives O

Since O has been driving, no one but me has handled the reins for the most part. G did drive her a little bit during the lesson I took with him, but it wasn't much, and I was in the vehicle too. That all changed this past weekend when I let someone new handle the reins!

B2 (since there is already a B, who was my navigator at Sunrise Ridge - so now we have a B1 and a B2!), is a local and longtime blog reader (since way back during the Gogo epoch). We've only just synched up recently after years of back and forth saying that we would, and she's been over twice now to play with the beasts. The first time, I took her driving up the road, and let her handle the reins a bit while we were under way. Driving O up the road is pretty easy though, you just sit there and do nothing while she powers along for as long as you want. You could almost take a nap when driving her up the road, she does it all by herself.
The second time she came to drive was this past weekend. It was a scheduled cones/obstacles day on my calendar, so we headed into the front pasture to work. We have lots of trees and terrain, so it's a good area for practicing obstacle work. We drove together for a little while, weaving around trees and discussing the work. Then I hopped out of the cart and told her to go off and do it on her own!

B2 had that look on her face like, "I've heard the stories about this mare.... am I going to die today?" but it soon dissolved into a grin. The grin kept growing and growing as she took O around and around, weaving between trees and going back and forth through the cones I had set for her. O is a bit like drivjng Gumby to the left, and like driving a 2x4 to the right, so I had B2 work primarily on that, aided with the help of the cones and trees.

By the end of it she was raving about how easy O is to drive. And she's right - she really is easy, and FUN! She's just *good* at driving, she understands it and she always goes right to work. (Well, except for the times when she doesn't.... but there's always a reason for it.) She has a buttermouth, takes a very nice and light contact, and just goes along nice as you please. She's ready to have some real impulsion added to her work now, seeing as she likes to spend most of her time plodding along nice and easy - I'll have to be very careful how I add that in though!

Both B1 and B2 came off their rides in the box seat going, "now WE want to drive!" Muhahah... slowly conquoring the world....

It's been absolutely blazing hot these past few days, so O had a couple days off while I alternated between working and hiding indoors in the AC. Yesterday morning, I got up very early to make I could have everyone worked before it got too hot - this included a leading lesson with Pax, lunging O in the Fauxssoa, and lunging P. Approvals are in early September, and P is looking mighty saggy these days. She's relatively sound right now, and her gut is hanging down to the floor, so I decided I needed to do a little something about it. She can't do much, but maybe we can at least pretend to put a little topline on her and shave some of the sagginess down. To top it off, she likes to stand right out in the blazing sun all day and sweat. Sweat + Texas sun = sunbleaching. I fight it the best I can, but there's not a lot I can do about it aside from wash the crust off her and encourage her to go roll in the dirt to put a protective layer on. Ugh!

Pax was a holy terror yesterday leading, for no particular reason. She just felt like bolting and dragging the human was a fun option, and when she got stopped it made her mad, so she reared and reared to show her annoyance. Rearing is her go-to for pretty much everything. She's not afraid of anything (except maybe the lawnmower, she's not sure about that thing), and whenever confronted with something in her way, she rears at it. For instance, when lunging her mother, she likes to charge at the lunge line and rear at it. Or, when she stops in the middle and I swing the line up over her head, she rears at it then too. Not that I'm recommending lunging your horses with a loose baby around, I'm not going to say it's terribly safe, but when you gotta lunge mommy then baby's gonna come along for the ride.

She wore herself out within short order, and then she led like a little sweaty puppydog. I took her out of the pasture for the first time ever, by herself, and gave her a nice bath. She's gotten really quite good about her baths, maybe even to the point of liking them somewhat - she at least thinks that playing with the water is very fun. 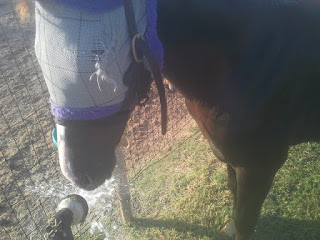 After that, I lunged O in the Fauxssoa, and she was lovely as usual. Following this, I bathed and turned her back out, then grabbed P and a lunge whip. I never need a whip for O, but I think I wouldn't be able to physically keep P going without a whip - especially with how saggy she is right now. 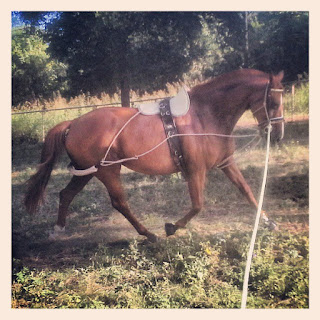 And, Pax got a new halter! She needs to grow into it still, but what do you think about the color? It's kind of an orchid color, not really your typical purple... I love it. 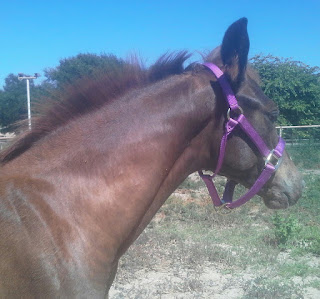 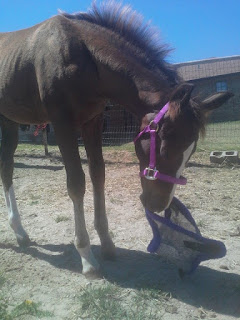 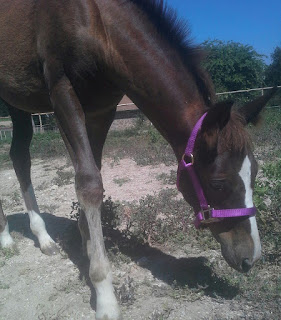 Bit of a boring update really, but that's how horses are most of the time - steady on, steady on!