And Suddenly, It's Summer

Texas has this weird super temperate super wet extended spring this year. We didn't really have a winter - we had some frosty mornings but no ice storms, which is unusual. Temperatures warmed up by February, and then we had this long, steady, relatively temperate extended spring, complete with quite a lot of severe weather and tons of rain (and flooding, although our house was spared from the worst of it). We had months of this kind of weather.

And then, literally just this week, Mother Nature decided to put the pedal to the metal and floor us right into blazing summer. All of a sudden, it's just SO. FREAKING. HOT. Sweltering heat. Dripping humidity. Total misery.

It's not like we didn't know summertime was coming. But it came on like a freight train this year, and we're all just sort of flailing around trying to adjust to the heat before we all pass out face down in a puddle of our own sweat. 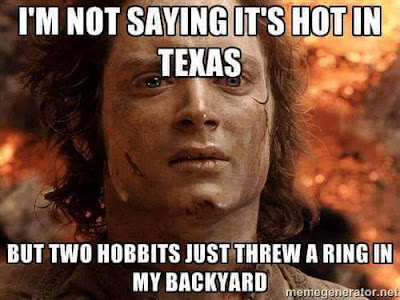 The mules all are completely fine with the heat. Uma was slightly sticky on her neck today, but for the most part, they run SO hot that they just aren't bothered or affected by the heat that much. They spend their time out in the full sun, playing gladiator with each other, and they never or rarely break a sweat. I've seen them all break a sweat when stressed - like when each of them was transported home in the trailer and were anxious - but as for regular old summer days? No problem for them. Their heat tolerance is exceptionally high. I didn't know this about them before I had them, but in speaking to other mule owners, they mentioned it - and I have noticed it in my herd as well. Donkeys are desert animals, after all!

The horses though? The horses are just roasting. They're miserable. They're dripping with sweat through the heat of the day. They are still out grazing, or eating from their haybags, but they are just soaked. They don't often spend time in the shade, although they all certainly have plenty of it, so perhaps the sweat is doing a good job of keeping them cool.

They have all been getting a hose down at dinnertime, to cool them down and rinse off the sweat. Dylan and O both need to be tied for their showers - they like feeling cool, but they don't much care for the actual event of bathing. 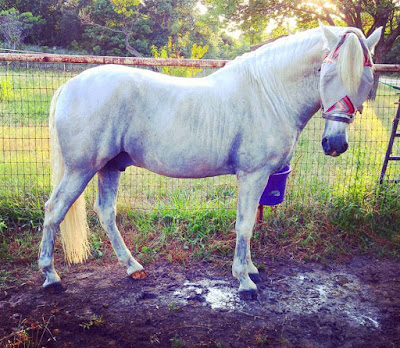 I even hosed off Lendri a couple of days ago - her first ever 'bath'. Of course, she was pretty convinced I was spraying her with acid, but once she realized the cool water felt good she stood still. Unfortunately, she then went and rolled so vigorously that she completely changed color. Mules...


They all seem to like being cool, but they just tolerate the actual baths. They'd rather not spend an extended time in the spray if they can help it.

She is a seahorse.


I can NOT keep her out of the water. Every chance she gets, she has as many feet in the trough as she can fit. Since she is now 14.2 in front and almost 15 hands behind, she is getting too big to do much of that anymore. So, she settles for running for the hose every time I turn it on, and grabbing it and flipping it out of the trough. She then stomps on it and tosses it around, so that she can get as wet as possible.

Every day this week, after work, I've taken the hose and turned it on, and turned the spray out towards the pasture. Both P and Pax see the spray flying, and they come right over for a rinse. Pax LOVES the water, and P just has enough sense to come over and stand still while I hose her off. She stands still for once side, then turns herself around so that I can get the other side. Sensible beast.

As for Pax, she is just a total pest and wants to get as wet as possible, as often as possible. 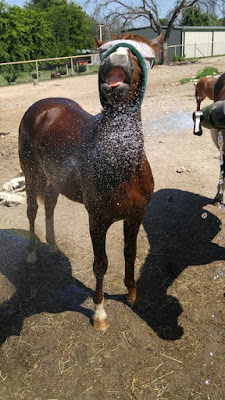 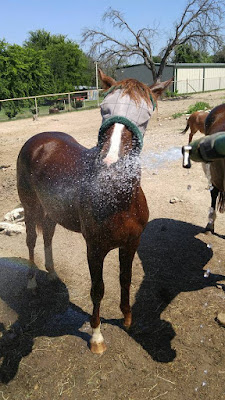 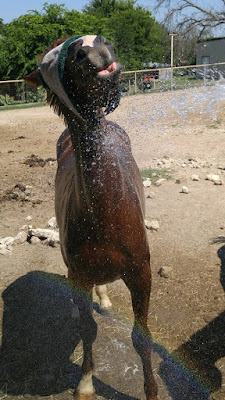 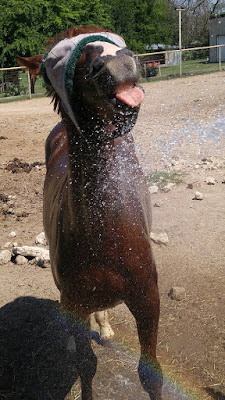 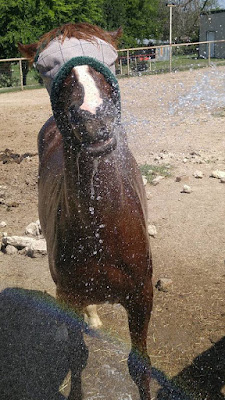 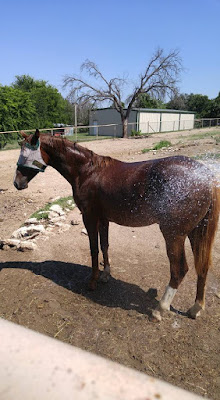 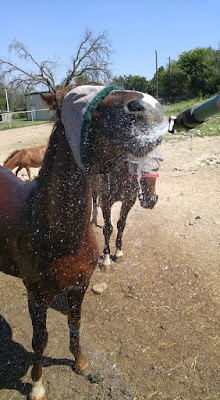 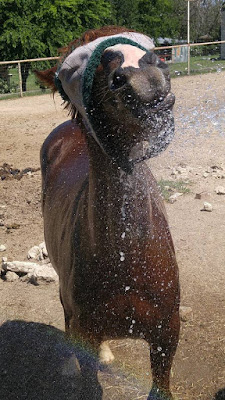 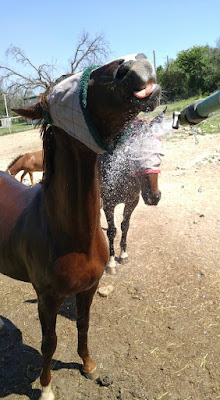 I have to literally stand at the water trough with a crop and beat her off of it while I am trying to clean and fill it. Otherwise, she is back in it, pulling out the hose and splashing with her front feet. Really filly?

Does anyone else have a seahorse? Surely I am not the only one with a water-obsessed horse!