While O's little fetus now has tiny soles and tiny frogs, P has been a very different story this breeding season.

She just turned 20 last month, and while she looks great for a 20 year old, she's still pretty aged now. The last time we bred her, we used fresh semen that was extremely potent, and while she had a few uterine cysts, she was able to take with just a single dose of semen and no other problems. As I shrewdly said then, "I'll never have another breeding season that easy again!"

Unfortunately, I was right. P has quite a number of cysts now in her uterus, more than she had last time. The Lasting Impression semen quality was poor at best - it was just garbage. It barely had 15% motility, and it was collected at least a decade ago. Had I known it was such poor quality, I don't know if I would have tried, but as it was the last of his semen anywhere on earth, I went for it. I took a chance, because I was really desperate for a chance.

She didn't take the first breeding. And then she didn't take the second. It's not surprising really. A 20 year old mare with cysts and frozen semen than is 15% motility at best? It was a really, really, really long shot. We even had a false positive where we thought she was pregnant - but it turned out to just be a giant cyst that looked like a 21 day pregnancy.

It's late in the breeding season now for here, and it's hot. BLAZING hot. Way too hot for a heavily pregnant mare or a neonate to cope with. I wanted to breed P to this one stallion, just this one. I actually have a live foal guarantee to the farm's other stallion, but I just don't like him very much. He's another son of Lemgo, so the bloodlines are similar, but I just don't care for him and I don't think it would be a good cross. I've poured a lot of money into this, and have nothing to show for it - I'm not really sure what to do about it. I don't know that I can sell my contract, but to pour all that money down the drain for nothing when I could potentially do something about it? It sucks. I also don't believe in breeding just to breed, so I would rather lose money than breed something I'm not terribly interested in.... but still. It sucks. It sucks alllllll the way around.

And it sucks even worse when I think about the fact that P is now 20, and I bought her to technically be my broodmare to keep this line alive. I've only bred one baby, and now I'm pretty sure she is sold and will be leaving. I will have no babies to show for any of it. And that just makes me feel badly, all over.

I can't tell you how exited I am for O's baby. I am SO EXCITED for that baby!! I am so excited to continue on in the world of driving - I LOVE it, I want to continue doing it. It's so much fun and it gives me the same thrills I had with eventing without the physical pain. That baby is going to be an amazing driving horse, and will also be a great dressage and WE horse too, or at least I can hope.

P's baby though.... P's baby was none of that. P's baby would have been an incredible jumper. An incredible eventer. A steady, reliable, big giant jumping machine. It was my last grasp at getting back into the eventing world. It was my last stab at believing I had a chance to do it again. I miss it. And I don't have any interest in going out and buying an event horse. I just... wanted this one. I don't know why I feel that way, I just do.

But it feels now more than ever that the universe solidly says that it's over for me. That it is done. It's not meant to be anymore. And I'm okay with that, but there is a part of me that is very sad.

It's been a rough week. But, I do still have a very snuggly yearling to cuddle with to make myself feel better about it all: 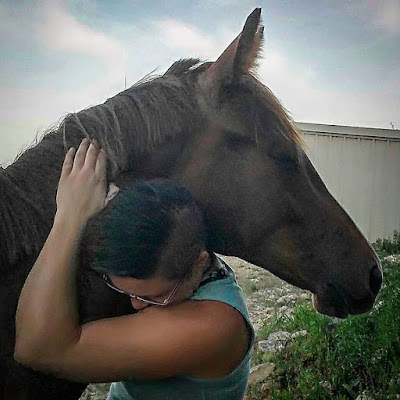 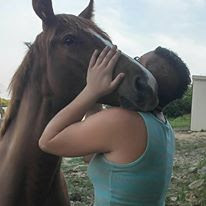 Email ThisBlogThis!Share to TwitterShare to FacebookShare to Pinterest
Labels: breeding