I Have To Admit, It's Getting Better

I've been going to see my physiotherapist now for about 6 months. Sometimes I get to go every 2 weeks, sometimes I only make it there once a month. He's been slowly working on my bad calf and bad shoulder, and bad everything basically, and it has taken a long time but he has gradually gone through layers and layers of pain to finally get things functioning again properly.

I'm not completely sure when this happened, but one day I realized that it doesn't hurt anymore when I ride.

I've been in pain for years. YEARS. Even when I was showing Gogo, my calf would cramp up so badly that I'd often times have to stop during my warmup and take it out of the stirrup to try and get it to relax. Over time, everything tightened up, and I lost nearly all the mobility in that ankle. I could no longer zip my boot on the left side, because constricting the calf made everything worse. Every ride was cripplingly painful, unless and until I rode for hours and broke the tissue all down manually. It always made everything worse whenever I did that.

Part of what made driving extra special was that it gave me the ability to participate in horse sports without having to suffer in the saddle. I was in SO much pain. I missed riding a lot, but I just was so physically broken down that I wasn't sure I could ever really ride again. And I'm only 31 years old.

Then along came Dylan, and my opportunity to have access to him. I jumped at that chance. Being able to afford that kind of horseflesh is not possible and will probably never be possible for me. I had to take it. I had to figure out how to get rid of my pain.

Doctors could not figure it out. They were throwing scary words like "permanent" and "surgery" at me, and neither one of those things sounded good to me. So, I decided to start with a physiotherapist who specialized in ART and sports massage. He's a triathlete, so he understands how frustrating and limiting pain can be to someone who is used to athletic endeavors.

Especially the first few times I went, I was completely disabled for several days after the massages. I'd sit soaking in hot water with epsom salts feeling like I was going to die. But I stuck it out, because I believed it could help me.

Slowly, the pain left me. One day I realized my twinging sciatica was gone, and it hasn't returned. My back feels great - I'm rarely sore or tired at the end of even my longest workdays, and I can always get up and work again the next day. He has just started to really get into my bad shoulder and I am hoping it also sees improvements.
But the biggest thing has been my calf. It still doesn't have a ton of flexibility, and it may never be quite the same as the other one, but it doesn't hurt. It doesn't hurt! It doesn't hurt when I ride, and I haven't been able to say that for YEARS. I was able to zip my boot all the way up for the first time in.... I don't even know how long... and I didn't have to stop and unzip it and squeeze out tears of pain mid-ride like I always had to do before.

With O's show season done, it's all about Dylan now. I feel that I am getting fitter and stronger, and he is too. We have a way to go before I really feel that we'll be tuned enough for the show ring, but every day we get a little closer to that. The better I ride, the better he goes. I finally feel that my fitness and pain level are both under control enough to FINALLY take some lessons. I never even bothered until now because I felt I wouldn't get anything out of it due to my pain, and the money was better spent at the physio than anywhere else.

The horse is just going better and better though. He's really coming together for me. He has his little quirks that tell me he's not connected - like he'll bob around off the contact if he's not truly engaged - but he's so straightforward. If he's doing something I didn't ask for or didn't want, I have to think about how exactly I am sitting or positioning, and 9 times out of 10 it is something I need to correct in my own position. He is so easy to sit that it's simple to figure out what is going on in real time, think about it, and alter it without worrying about bouncing around or losing some other piece of myself in the process. I don't know how I'll ever go back to straight warmbloods after him... it's like upgrading to a Ferarri after driving around a bunch of dump trucks. Okay not really, not with my own personal horses anyway... but we all know some big clonkin' warmbloods who jar your kidneys with every stride. 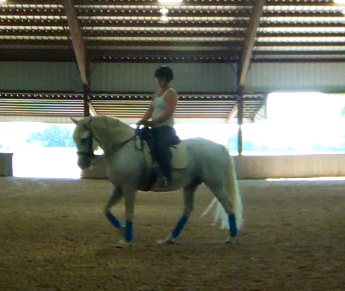 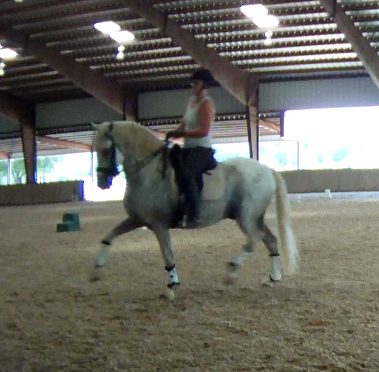 I'm starting to sit about 50 bajillion times better than I was a few months ago. Case in point:

That leg was so painful that it was tilting me right out of the saddle half the time. Everything was terrible. But it's not terrible anymore.

Email ThisBlogThis!Share to TwitterShare to FacebookShare to Pinterest
Labels: dressage