Phew - I am finally caught up with Pine Hill! Of course, now I am leaving today to go to the Cowboy Country HDT.... so I'll have another huge writeup at the end of that! Doing back to back shows is super hard - it's exhausting to prep for and go to a show, and then to literally come back and prep for ANOTHER show the next weekend? Phew! My showclothes are loaded, my harness and carriage are scrubbed and ready, O's boots are washed, my grooming stuff is all loaded, my trailer is cleaned, the hay and feed are all packed, and I think everything is just about ready to go... oh wait, I still have to pack my going away bag. Damnit!


How many other sports can you have all of these types of equines interacting with one another, and not care one bit? The sight of a mini - or the sight of a mule - sends a lot of horses into a total tailspin. Not a driving horse though! The little mule is Handsome, who is known well around these parts, and O fell in LOVE with him. I'm not sure if she liked him because of her own mules here at home, or if he just was the right size to make her think he was her baby, but she couldn't stop nickering to him, and then cried hysterically for him when she went back to her stall. She doesn't feel that way about the other minis, just the mini mule apparently!

Sunday morning dawned bright and early again, and once again we had our ritual of terribly bad coffee, donuts, and filling the cooler with things to drink. I decided after feeding O and cleaning her stall that I really needed to go walk obstacles 4 and 5 again, since I was not clear on the route and couldn't remember some details. Thank god I did - I was completely confused and lost. Some experienced people came along at one point to find me standing in one spot looking totally lost, and they were kind enough to point me in the right direction.


I finally got things sorted out in my head, and walked back to the barn. My feet were sloshing in my shoes already - it was still SO wet. There was active water running across the course still! Everything looked like this:


If you are super interested in actually seeing the coursemaps, you can find them all here. But they are kind of image heavy, so I won't post individual pictures of them, save for part of Hazard 4: 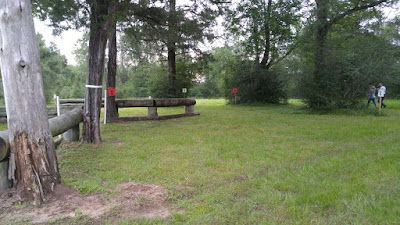 I also did a few Facebook livestream videos over the weekend, one of which I'm going to share because it's both educational and kind of funny. You'll hear me make some random commentary, which is directed at the people who were interacting with me and making comments on the livestream. It's a super fun tool for things like this! I'll probably do a few more at Cowboy Country too.

As we were one of the last to go, I knew the course was going to get increasingly torn up as the day went on. The VSE drivers all came back to the barn with their minis looking fresh, and with reports of it not being too bad, but I figured it would change. I didn't even bother to really seriously wash my carriage... because why do it. It was just going to get covered in muck anyway! It was so mucky that I decided to go completely barefoot for O - usually she shows in boots, but it was so muddy that I felt they would just get ripped off anyway.

Right from the get-go, everything was slop. TOTAL slop. It felt like we didn't even have wheels on the carriage - like she was just dragging a dead weight through the mud. There wasn't a single spot on the course where I felt like it let up for a little while. It makes it so much more exhausting for the horse when they have to drag the carriage like that instead of it rolling along smoothly. She was exceptionally clever about her footing, and slowed in a few spots of her own accord - I let her choose these, and then trotted onward once we were through the areas. The entire course had been slowed down a whole kph to account for the state of the course, which I was thankful for.

The hazards were all fairly simple and easy to negotiate. She cruised through every one of them like it was nothing, no issues whatsoever. The only alteration I made to my planned course was in the 4th hazard, where I decided to go around a jump instead of button hooking the first gate (go in, go out). It was too slick and muddy at that point, and I felt it would just tire her further, so I opted to go around.

I let her walk a large part of the last 300 meters, as she was very tired by the end of dragging the carriage and our two butts through the horrible, wretched slop on a super steamy, ridiculously humid day. She never quit on me. O has a history of totally checking out when the going gets a little too beyond her, but this time, she showed that she has really matured and that the sport suits her. She was tired - SO tired - but when I asked her to trot on, she trotted on. She never quit, and she never said no. For that alone, I was so proud of her.


It's pretty poor camera footage - I didn't place the GoPro very well, so I will try again this weekend. If you turn the volume up high you can hear me talking some!

We finished under the time and clean. She was very hot and breathing pretty heavily at the vet, so we dropped the carriage and went to vigorously cooling her. Right about this time, poor B2 got the call that one of her dogs had to go in for emergency surgery (he's okay!), and she had to take off to get home. Poor B2... she had to get soaking wet all weekend, almost heat stroked out a million times, never got her proper coffee, had to deal with my ruthless taskmaster orders, and then her dog almost kicked the bucket. I don't know if she'll ever want to go with me again!

After about 20 minutes of aggressive cooling, handwalking, and grazing, we went back to the vet, and were cleared. O was quite fine by then, which meant we were officially finished! 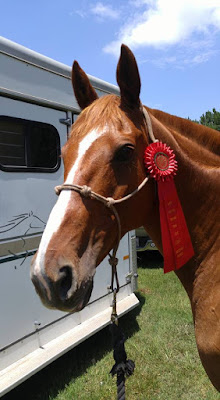