Over the course of my life, I've come a very long way in terms of how I like to keep my horses. I've been through many phases.

When I was a kid, most of the horses lived outside 24/7, barefoot and nekkid, with a shed and friends to live with. The fancy show horses were kept in stalls, were shod and clothed, and had solo turnout. As I "upgraded" to fancier horses, I transitioned too. I went from having them out nekkid and feral, to keeping them in the isolated lifestyle of the show horse. They lived in stalls nearly all the time, and they went outside alone. Metro of course wore all kinds of ridiculous remedial shoeing, which got more complicated the more lame he went. Gogo was barefoot, and was my first foray into that world, but I still kept her (and Metro too, of course) in that very isolated, totally unnatural lifestyle.

It didn't work out so great. Two horses dead at young ages due to breakdown limb injuries? I couldn't do it again. I had to change something. It wasn't working.

And so, I did. I pulled my horses out of stalls. I put them on slow fed free choice hay 24/7. I put them in herds. I don't feed ANY processed hard feed or grain. Every one of them is barefoot and goes booted when need be. They wear clothes when they need to, and I still clip for shows, but for the most part, their lives have been naturalized to the greatest extent that I can provide for them.

Naturalizing a horse that has been kept unnaturally for a long time is not an easy thing to do. I think the pinnacle of my achievements has most certainly been with Dylan, and I'm proud of how far he has come.

Dylan's owner is definitely all in agreeance with me here, so I had the go-ahead to basically do whatever I saw fit with him. She had kept him pretty naturally when she was caring for him, but he had been with the trainer for a number of years when I got him. He was living in a stall all the time, because he was the absolute worst fencewalker I've ever seen. They couldn't keep weight on him because of this - he would walk the weight right off of himself. So, he got an hour of turnout here and there, sometimes, but mostly he was stalled all the time. He was being fed a large amount of Senior feed, but was thin. And he of course was shod all four.

We started with the turnout. I booted him out as soon as he got here. He walked the fence literally nonstop for a week straight - he would grab the occasional bite of hay as he passed by his bags on his passes up and down the fence, but that was it. He was super grumpy, and didn't want to be handled or caught. He acted ulcery. He was not a happy guy.

When he went out into his 24/7 turnout, that went hand in hand with freechoice good quality hay 24/7. After a day or two of him still walking the fence, I started him on ulcer meds. Within the week, his fencewalking activity dropped off by about 80%. After a couple of weeks, when I was sure the walking was way down, I pulled all four shoes.

During that time, I also started his transition from hard feed to my usual protocol of hay pellets, a vitamin/mineral supplement, and a bit of fat to the ones that need it, like the working horses. I feed a bit of Healthy Glo with the hay pellets, although I have been considering trying Renew Gold instead - very similar products but the Renew Gold has copra meal. The mules, the baby, and Pmare just get hay pellets and their vitamin/mineral supplement mixed in. In hot weather, they get sugar-free electrolytes. Sometimes they are on herbs or other supplements for a time if they need them, like for gastric support, or something simple like MSM. If I am feeding a joint supplement, it is nearly always Cosequin.

On this program, he filled out and gained a ton of weight. He stopped being so flinchy. He stopped being hard to catch. He even got friendly, or as friendly as a super egotistical hypermasculine stallion can be with his human slave.

I had completely changed his lifestyle. I had put him out 24/7. I had taken him barefoot with no issues. I had provided him with freechoice hay 24/7, and put tons of weight on him without the use of processed feed. But, there was one thing I wasn't able to provide for him until now: a friend. Dylan has been kept alone as a stallion for almost his entire life now, certainly at least for the last 12+ years if not longer. Solitary stallions can become pretty savage because they don't always know how to handle themselves properly in a herd. And fights and injuries can occur if they try to ravage their herdmates and they get the snot kicked out of them in return. It's a tricky business.

But there is the flip side. A stallion wants to be a stallion. He wants the company of mares. He wants to protect them and snake them around. He wants to have their companionship. I'm pretty sure that 95% of Dylan's anxieties and fencewalking behaviors were just due to the fact that he was alone, and he craved companionship.

And now, I've been able to give that to him. 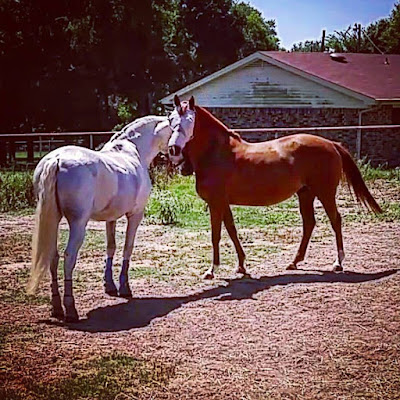 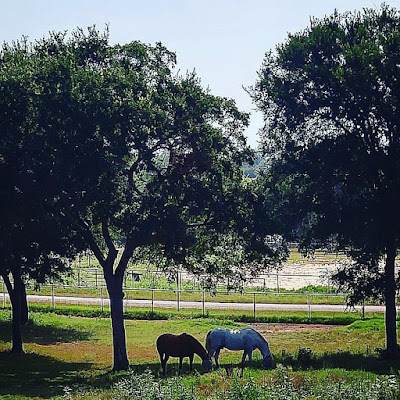 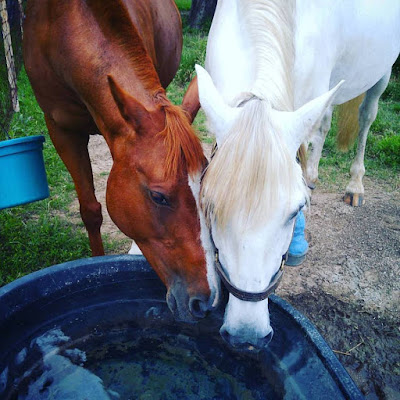 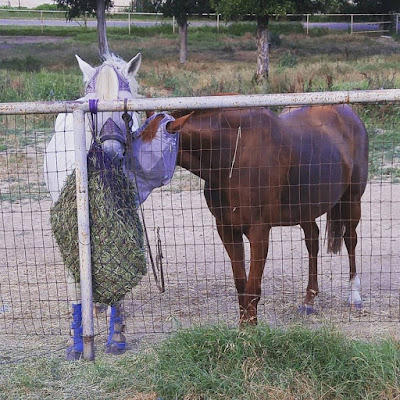 These two are inseparable. They LOVE each other. They do everything together. They share a haybag. They drink together out of the trough. They graze side by side. O enjoys having a stallion to move her around a bit and tell her what to do, and Dylan is just so totally desperately happy to have a mare of his own to watch over. It is both interesting and super endearing to watch them interact.

From being stalled 24/7 and unable to even be turned out because he was so neurotic, to living outside with his own pregnant girlfriend.... he's come a long way. And he is SO much happier and better off living the life he naturally craved. I'm so glad I've been able to provide that for him.