A lot of bloggers have mares being bred this year (and every year), and there has been a lot of writing about what goes into breeding a mare and how the process is done. What you don't get to see much of (or at least not in the blogs I'm reading) is what happens on the stallion end. As I have an active breeding stallion currently in my care, I thought I'd give a little debriefer about what goes into the process of collection and shipping.

I'm also unfortunately tasked now with trying to word all of this without making it sound weird and creepy and perverted. I think the whole process is really interesting - hell, I have an actual college degree in reproductive work - and I'd love to use all the completely scientific terms, but I'm also aware of the fact that there are lots of nasty people out there Googling animal, uhhh... you know whatsits... and I don't want this blog to be the first thing, um... springing up in their search. So now I get to find lots of ways to avoid using choice words. Am I able to... uhhh... rise to this occasion?

(By the way, if you are squicked out by wieners, you should probably just run for it right now.)

Today Dylan was being collected for a mare in Michigan. This whole procedure is time-sensitive, as the mare has to have a follicle that is about ready to ovulate, and the stallion must be collected in time for 'the goods' to be delivered in a timely matter. If shipping fresh cooled, the biological material will die if left for too long, so the whole thing needs to be done with some speed and delicate timing.

Every clinic does things a little bit differently. In college, we called our breeding shed The Bullpen. The stallion was put behind a solid wooden tease wall and a mare was brought to him to tease. We had one stallion in particular who was a real savage (and he hurt a number of people), so being back there was not fun for anybody. He was likely to strike you in the head as he loved to rear and come at people on his hind legs, and behind the tease wall there was nowhere to go. I saw him grab and shake somebody once like a ragdoll. He almost killed another stallion when he jumped a 6' fence to get in with him (literally punctured the other stallion's lung and broke his ribs). He was seriously evil. Thank god Dylan is NOT like that at all.

In our vet clinic here, the breeding phantom (which is the dummy the stallions mount when being collected) is situated in a similar large area with rubber mats, but there is no tease wall. Instead, the stallion teases the mare from the other side of the phantom. The mare is brought into the shed and parked on the far side of the phantom, and the stallion is then brought in. The vet or tech cleans his winkywank to make sure dirt and crud doesn't get mixed in with the goods, and then the stallion is allowed to go and tease the mare. Our clinic has just one mare; sometimes a clinic will have several mares that they run through as tease mares, and they'll bring in the ones that are in heat. Most of the time the mare is given some hormones to bring her into heat, but once in awhile you'll get one that perpetually shows heat - this is basically the perfect job for them. But, everyone manages this a little differently. The important thing is to have a mare in standing heat for the stallion to tease, to get him to mount the phantom and breed. 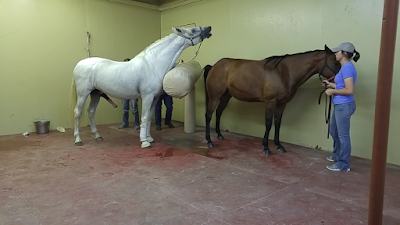 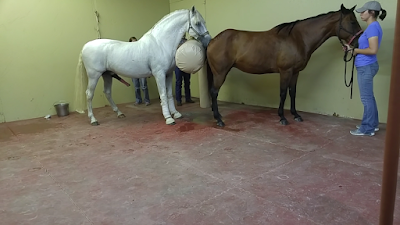 Dylan is a gentleman and talks nicely to the mares. He doesn't act fractious, bite, strike, rear, or get unmanageable. It does takes him a minute before he'll mount the phantom though. Being the manbaby that he is, the AV (that's artificial boogeena, if you didn't know) wasn't tight enough for him the first time around, and he dismounted. Filled with more water, he was then successfully collected. The AV is basically exactly what you'd imagine it to be - basically a leather or plastic casing with a handle and an inner liner. You fill the liner up with hot water, lube it up, and, well, there you are. Your imagination can figure the rest out.  On the end of this is a little collection bottle that the goods get poured into on their way out. The AV is hand-held, meaning somebody had to get under there and hold it while the stallion is on the phantom. I've been on the holding end of one many times and it's definitely as difficult as you'd imagine it to be. My favorite vet Dr. G (who I stayed with in Oklahoma) got whacked in the head once with a mounting stallion's hoof, so it's not a bad idea to wear helmets in there.


Once the stallion has handed over his goods, the vet takes the AV back to the lab. She takes a sample and looks at it under the microscope, checking out the motility of the swimmers. Ideally, you want everything to be moving mostly in a straight line, which is considered "progressive motility." Sometimes you'll get swimmers that are moving but not going anywhere, or are going in little circles. Those are less likely to knock anything up, but they are still considered motile. You'll also get some dead ones. When I bred P to DDM, his swimmers were 95% progressively motile - super semen. When I bred her to LI, his swimmers were barely 15% motile at all. They weren't getting anything knocked up noway nohow.

Once the motility has been established, to make sure the goods are good, the semen is put into a centrifuge and spun down to concentrate it. Dylan today was not very concentrated but the motility was good, so it didn't matter too much. The spun-down semen is then added to a premixed fluid called extender, which is basically sperm protectant that extends the life of the swimmers as well as protects them from pathogens and changes in temperature. These samples are then placed into little baggies and are carefully cooled and put into an Equitainer (which is the shipping carrier that will take them to their destination). Fun fact about me: when I was in college, we did some research to see if we could develop a plant-based extender. Most of the extenders on the market today are milk and egg based, and with all of the concerns with bird flu, we tried to experiment a bit to create something better. No dice, at least not back then, but it was fascinating stuff. I also learned how to freeze semen during that same internship, which was ridiculously science-y and cool.

The Equitainer is shipped off overnight to its final destination, where the receiving vet will then inseminate the mare. Timing is really important here, as after 48 hours everything in the Equitainer will start dying, and it must be there and ready to breed the mare when she is ready to ovulate. Many vets give ovulatory hormones to make sure this gets timed properly. It's all very interesting and full of science and timing.


So there you are, more than you ever wanted to know about semen and stallion winkywanks!