As other Texas bloggers have recently been writing about, it's hot. Like, really hot. Like really REALLY REALLY HOT in Texas right now. I'm starting to think Dylan torqued his leg just because he wanted a summer break from the heat. Can't really fault that logic.

His leg is looking good and he seems quite sound. The leg isn't as *perfectly* tight as the other one, but it may never be exactly the same. He goes back on Friday for a two-week checkup ultrasound and lameness evaluation. Dr. H was pretty optimistic that he would be back to work within pretty short order, so I am hoping we get some good news. He's been completely out of wraps for about a week - it's SO HOT right now that I felt like wrapping was just keeping excess heat in, and not helping anything. He still gets poulticed and coldhosed, and during the day has been back in his fly leggings (because he is a man baby and bug bites make him chew on his poor widdle leggies). I've been thinking I should get him a pair of Equisleeves, which are less hot and bulky than standard quilts and have the dual purpose of not letting the bugs bother him. Anyone use them and like them? I've never used a pair before. 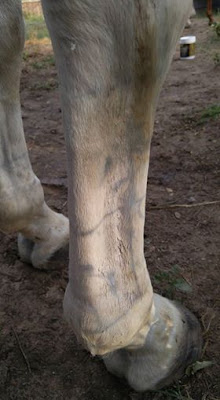 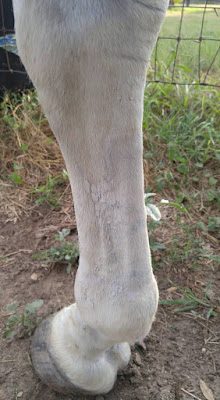 O's kind of getting a belly on her isn't she! Well, it could be just fat... but.... we'll say it's a wee baby bump. Her udders are changing too, which I find super interesting. Her baby is about the size of a kitten right now, so certainly not very big yet. She's completely peaceful and zenned out with her pregnancy hormones - she's such a nice, quiet, sensible mare when she's not in heat! I miss working her, but she gets groomed and doted on every day which she finds quite agreeable.


In the meantime while I wait for Dylan to heal up, and despite the heat, there are a bunch of wee babes and youngsters to be worked! 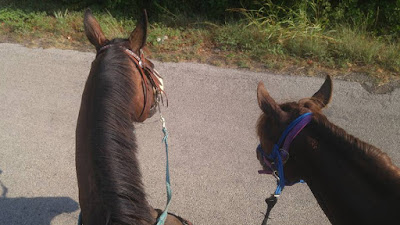 P is not sure when she got signed up for resident baby-dragger, but she is pretty certain that she did not authorize that assignment. Luckily, the more she gets ridden the better she is, so even though she tends to gripe about it when we first get going, once she is out on the trail she is all ears forward and marching onward. Her soundness actually feels better now that she is starting to be ridden more often - she may have just needed to grease her joints up and get moving, since she is the one who basically parks herself at the haybag and never EVER leaves. She is that lazy slob that eats twice as much as anyone else, poops twice as much, and walks 5 feet to her pooping spot, 5 feet to the water trough, and 5 feet back to the haybag. She never goes ANYWHERE else. So I don't feel too bad putting her back to light trail work, because she needs to move way more than she does!

She really is a great pony horse. She gets on with anyone, drags them when they don't want to go, doesn't get upset if they do something silly, and just keeps marching along no matter what happens. She also stands parked immobile, which is immeasurably useful, especially when teaching babies about standing still. Pax is probably the least wiggly baby I've ever met, which is nice. She stands still for everything, including standing whenever we stop while out ponying. Pax gets better every time we pony, although I did start putting a rope halter on her to remind her about her manners. She about pulled my arm out of my socket when she tried dragging us all a few pony sessions ago.

And Lendri is now starting to pony too! She went for her first ponying lesson yesterday and did very well. I originally put the Be Nice halter on her, anticipating some trouble, but it actually caused more problems (i.e. her putting on the brakes and refusing to move) that I took it off and just used her regular halter. She surprised me with how well she can keep up with Pmare! She is a FAT little sausage so ponying is really a good thing for her - gets her exercised!

And Sriracha is still the Valedictorian of the mooles. She is so incredibly smart! Not having any prior handling has actually been the biggest benefit of all - she's just this totally open book, waiting to be written in. She's learning at such a high rate of speed that it just floors me every time I work with her. And I don't work with her every day either - every day, she gets a cookie and gets petted a bit and talked to, but certainly not pulled out of the field and worked with. Whenever she does get worked with, if something makes her unsure, she might wiggle and flinch, but as soon as she realizes whatever it is isn't going to hurt her, she is immediately fine. Today she let me pick out her hind feet for the first time, and it was SO worth it to wait for her to come around for that. I tossed a saddle pad on and off her a few times, which she was a bit flinchy about, but then on a whim I decided to show her the harness and see how she reacted.

In about 2 minutes, she was wearing it fully girthed, crupper and breeching included, like she had been doing it her entire life. As is usual with her, she was super squinchy when I pulled up her tail - which I had never touched before - but she was completely fine with it once she realized it was all right. I've been lunging Lendri in harness for months now and I STILL have trouble getting her crupper on, every time. (Admittedly I'm 100% sure Lendri was abused.) 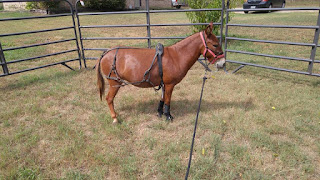 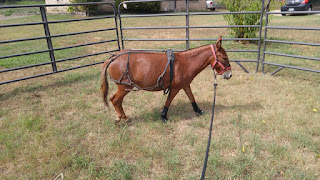 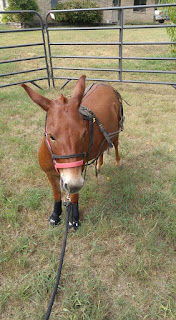 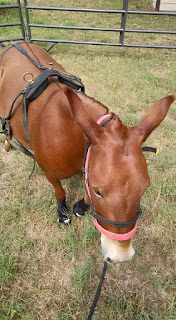 Piece of cake. I honestly think she won't be all that hard to teach to drive. I've had my lingering doubts about whether or not Lendri will ever really be a driving candidate or not, but I have no doubts about Sriracha.


Now we just have to get Dylan well... if I can find him under all the dirt that is.... 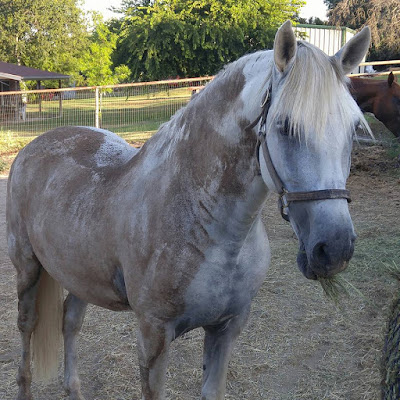