First thing is first - I have a new truck! I actually got it not quite three weeks ago but hadn't written about it yet. I wrote last month about how my Patron was wearing out, and so this month I bit the bullet and bought a new one. It is another Ram, bigger than Patron, a 2500 Heavy Duty, and it already has a gooseneck hitch as well as a regular tow package on it. This way, I have now planned ahead for when I upgrade to a bigger trailer, which I also wrote about in the linked post! This new truck has all these luxury items that I had no intention of getting in a truck, but it came with them already, so why not! It's actually a 2013, but it only had 32,000 miles on it, which is nothing. And I got it for less than half of what the original sticker price was, because nobody wants a nearly-new truck if it is 4 years old, apparently. Patron had 260,000+ miles on it and was still going, so 32,000 is nothing to me. In all likelihood, Patron would have made it to 300,000 and beyond... it was a good sturdy beast. 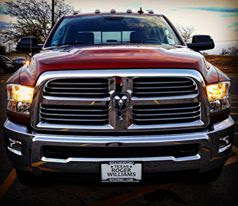 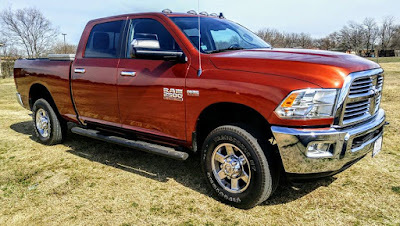 We named him Starscream, and yes, he is bright orange. Patron was always an non-gendered 'it' vehicle, but I feel like this one needs to go by male pronouns. No particular reason, I just feel that it's right.

So that's pretty awesome. It's not a cheap truck payment, but it's worth it.

In other news, I'm prepping Pax for the two FEH show we have available to us in Area V, Meadowcreek and Texas Rose. Both of these are held on Fridays before the actual event starts. These classes consist of standing up for conformation judging, then walking and trotting the triangle. They're supposed to be low key and good experiences for the young ones. Two year olds show in a bridle, so Pax has been learning about wearing a bridle for some months now. This month I started working on leading her from the bridle, something which she is starting to understand. I tried leading her with reins, but it became apparent that she is so fractious still that it is wiser to show in a bride but use a newmarket lead. She ripped the reins right out of my hands at one point, although thankfully she then just stood there and looked at me. After that, I tried a rigged up lead which resembles a newmarket, and that worked much better.

I also pulled her mane for the first time, and since I plied her with quite a lot of cookies, she wasn't too thrilled but she took it pretty well. As long as I pull a bit here and there, it will be easy to maintain.

Now clippers are another story, and her ears are also another story. Even though I imprinted her with clippers and have clipped her nosey, and I also messed with her ears when she was little, apparently I didn't do it enough. She had a bit giant fit at the end of her lead rope when I tried to clip her bridlepath, and after she set back hard enough to break a snap on her halter, she whipped around and double barreled at me savagely. She did it repeatedly until I walloped her a good few ones from a safe distance with a dressage whip. That's NOT allowed. You don't just kick people when you don't like something.

So now, we have to backtrack on working with ears and clippers. Every day, I go into the pasture at feeding time with cookies, and I play with her ears, plying her with candy when she is good about it. She REALLY doesn't like it, but she likes cookies, so we get somewhere. I am determined not to screw the new baby up with her ears. I won't make this same mistake again.

Because of her violence at the end of the lead rope, I had my chiropractor look at her when she was out to do Dylan on Monday. Dylan actually held his last adjustment really well, and most of what we did to him was pretty minor. Pax, on the other hand, was out in her neck in several places, all the way down through her withers and beyond. She REALLY did a number on herself. She does seem much more comfortable after her adjustment, and is less averse to letting me mess with her poll.

I also have finally found a suitable show bride that fits her - it's Potato's! Sweet Potato outgrew it and Roxie's mom was nice enough to send it to me. It fits Pax perfectly. I have her in a simple snaffle, which is almost too small for her now. Despite her ear aversion, she bridles completely fine and doesn't mine her ears being pushed through the bridle at all. Weirdo. 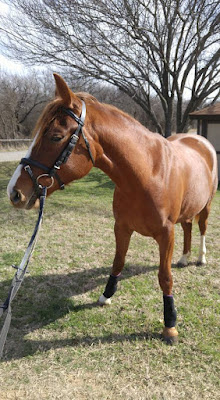 If you're going to be at Meadowcreek, you should come see her go on that Friday. It will probably be a pretty awesome rodeo complete with lots of rearing and idiocy!