Since Bay Girl's progress has been so excellent over the past month or so (changing from uncatchable to very friendly and willing to be caught), my boss decided that she deserved a little treat. We took a leap of faith and moved her from her small pen (where she was able to be caught when she was uncatchable) to the large pasture with the other pregnant mares. She moved her over to the big field while I was away on vacation for the holidays, and crossed her fingers, hoping that she wasn't making a mistake and that she would be able to catch her again at feedtime. You never know what is going to happen when you give a formerly uncatchable horse a gigantic space to live in and friends to play with... they might never come back!

Lo and behold, she had nothing to worry about. Bay Girl not only came back to be caught, but she approached and waited patiently to be caught and put into her pen for feedtime. All four of the mares in that field live out 24/7, and at feed time we separate them in pens so that they can all eat their individual grain and supplements. In less than two days, Bay Girl figured out which pen was hers, and now stands patiently next to it waiting to be caught for her meals. She even nickered to me softly yesterday at breakfast... the first time she's talked to me directly. THAT felt awesome.

The mares all hanging out together.... 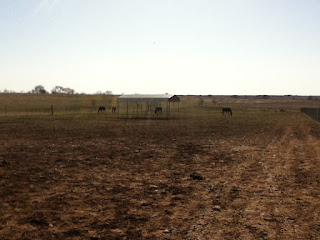 The biggest challenge I faced following the move was this: now that Bay Girl had friends, how would she react to being taken away from them? Beforehand, I always just caught her after dinner in her little solo pen, and she'd always be waiting for me, the only member of a herd that she knew. Now, with the company of other horses, I wasn't sure if she'd act the fool or not when I took her away to do whatever it was that was planned for that particular afternoon. I can't stand a herdbound horse, and take steps to ensure that my horses see me as a good leader that they want to be with (and therefore don't stress about the rest of their herd while they are away from them), but I fully expected her to have some sort of anxiety at first.

What did I get?

Silence, obedience, and the best behavior I've seen from her yet.

Wow is all I can say.

She allowed me to catch and halter her without much issue, and I actually think I have the haltering issue figured out - or at least the cause. When you approach her and take her halter by anything other than the catch rope, she tosses her head, wiggles, and fusses pretty dramatically. When I happened to do this the other day, she reacted just like that, and I went to pat her neck to quiet her. She jumped and skittered away from me, and the lightbulb went off in my head. She thinks I am going to either deworm her or give her a shot. DUH! I am sure that if she was living in a band of surrogate mares, there was just a day when all the surrogates needed their shots and needed their dewormer, so someone just went through, grabbed horse by horse, and shoved it down their throats or stuck it in their necks. No matter if they fuss or wiggle, it has to get done and everyone is on a time schedule. Grab, stick, and repeat on the next horse. Add to my list of things to work on in the future: syringing her in the mouth with something delicious. This will not be an immediate goal, since all I want to do right now is get her to trust me handling her head (and not freak her out with the syringe), but I will make a mental note of this for later.

I put on her halter, took her to the barn, and gave her a nice and thorough grooming. She marched with purpose to the barn away from her mares, didn't even call once to them, stood like a rock in the crossties - the best she's ever been - and even let me curry and brush her face, forelock included. I curried her hard, I moved with less care around her, I touched her legs and belly all over, I rubbed on her face.... she was excellent about ALL of it. I even waved my towel around and rubbed her all over with it without much issue, though she is still unsure about it flapping around. I am confident that it won't take her long to figure it out. This mare is a genius, I swear. Not a day goes by when I don't marvel at how quickly she has picked everything up. And she has not ONCE shown me even the slightest bit of attitude or ever said 'no' to anything I have asked. She is the epitome of sweet and willing. And whenever we have encountered a problem, she has always stopped and figured it out on her own, or waited for me to help her. She wants to work with me, because she wants to do the right thing. And I think that maybe, just maybe, she is starting to figure out that I am not here to do anything but be nice to her. I don't think she's ever had that before in her entire life.

When I turned her back out with her mares, I took a video of her, simply because I expected her to go galloping down the hill to them away from me. Instead, she stood there with me for quite a long while, and it was only when I moved away that she bothered to leave - and she went at a walk.


I am still contemplating names but the two that are sticking with me most are Portia and Jolene. Jolene just sort of popped into my head the other day and I am really liking how it feels.... sort of soft and gentle and graceful and easy. Portia implies sexiness and spunk, which I think doesn't suit her gracious personality quite as well. Time will tell on this one, I suppose.
Posted by Andrea at 5:49 PM