(A repost from Eventing-A-Gogo. More on the little mare later!)

This story begins with a younger me, my beloved gelding Metro, and a laptop in a college dorm room. I was a freshman, completely enamored with my beast-gelding, and was spending a moment of my free time surfing the vast interwebz for old information about my horse instead of doing something important (homework? Why do that?). Quite by accident, I stumbled upon a sale ad for a bay mare named Chloe in Alberta, Canada. Her sire was listed as Blue Rodeo, Metro's Canadian-registered name. Immediately I perked up. He was her sire? I knew he had been kept a stallion until he was six, and that he had bred a few mares, but didn't know of any actual offspring around anywhere. Sure enough, the fantastic little mare was up for grabs at a fairly hefty price. Video clips of her showed some dressage and galloping cross country. Pictures told of a beautiful, well put together mare. Her description sounded like she was exactly like my Metro, even walking boldly up to a running chainsaw and attempting to put her nose on it (yikes!). I oogled over the ad for weeks, wishing I could somehow find a way to afford a second horse. One day, a big graphic proclaiming "SOLD!" appeared on the front of her ad. Disappointed but not discouraged, I e-mailed the owners and asked if I could be put in touch with her new owner so I could speak with her. After some complicated finagling, and some months down the road, I managed to reach her. We sent countless e-mailed to each other, chronicling our collective related journeys and our precious horses. I was enamored with the little mare.

A year or so down the road, I got back in touch with the mare's owner. We discussed setting up a custom breeding for me for a Windfall baby out of her, now redubbed from Chloe to Sophie. My Metro had died by this time, and I wanted to keep a piece of him alive with me always. This never ended up coming to fruition, as I ended up buying Gogo instead. I told the owner that if she ever needed to find a home for Sophie, she could always contact me and I'd take her in a heartbeat.

We kept in touch over the following few years, just little drop ins to ask how everything was going and how our little mares were doing. Sophie was bred and produced a precious little filly by a Swedish stud, born right in the middle of a horrible storm with no muss or fuss. Life went on as it always had.

A year and a half ago, I couldn't get ahold of the owner. Her e-mail had been changed, and I had to do some serious Googling to find her. It took some time, but I managed to get ahold of her again to see how Sophie was doing. Much to my surprise, she was for sale. The owner was pregnant and no longer had time for her. Would I like to buy her for $10,000? Well, I couldn't exactly afford that random expense, much less keep two horses at the level which I was accustomed (spoiling rotten and sparing no expense), so I unfortunately had to turn her down. I was heartbroken. I wanted that mare so badly it made me ache.

She offered her to me again some months down the road. Again, I couldn't afford to keep two horses, so I declined. I forgot about it in the haze of rehabbing Gogo. We lost touch again.


The week after Gogo died, completely out of the blue, I received another e-mail from the owner. I hadn't spoken to her in nearly a year. Would I still be interested in Sophie, she asked? Price dropped to $2500.

Good lord. Could that timing be better? One door closes, another opens.

This isn't the perfect deal. She's 15. She had an old stifle injury years ago that I know nothing about. I have no idea what she's been up to, if anything. I have to hear back from the owner concerning all of these things. But honestly, with this horse I wouldn't even care if she was just another expensive hayburner looking pretty out in a field. Let's hope she's not, let's hope she's perfectly rideable and wonderful, but either way it wouldn't matter to me. I've been actively pursuing this horse for almost 7 years. She could have three legs in the grave for all I care.

It's interesting about how much resistance I've gotten about this. Everyone says not to even bother thinking about pursuing it. Everyone is absolutely sure that they know what I want. Even my own mother told me I wanted a different kind of horse than this. I think that is all very interesting, seeing as aside from owning a piece of my heart horse, I don't even know what I want. To be fair, externally I imagine it looks like I want another uber-talented youngster who can replace Gogo as a Prelim prospect. In reality, the more that I think about it, the more that I feel ill about the prospect of essentially breaking and killing another horse. Do I want a horse with huge expectations and then be horribly let down when I fail to take them anywhere except to Lameness Town, or do I want something sweet and fun that will pleasantly surprise me if they turn out to be a good riding horse? Do I actually want to look at all of the following: a big, fancy warmblood that will win everything but totally fall apart a few years down the road? A little project mutt that will be fun but might not amount of anything at all? An off the track broken down maniac that might either kill me or itself in the process of turning it around? When you put it all that way, it's hard not to get discouraged about this whole process, and I'm pretty soured off the whole sporthorse ordeal at the moment.

This is not a good picture of her - I will have better ones later - but you can get a vague idea of what she sort of looks like: 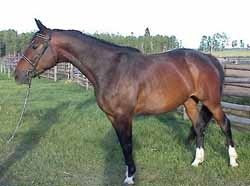 She's a lovely lovely girl. I'm set to fly out to see her on the weekend of January 7th and 8th. I can't wait. Who knows? She might be completely unsuitable and useless, and I might hate her and turn her down. But on the other hand, she might be exactly what I need to turn my funk around and get me back on the track that I know I am supposed to be on. Only time will tell.
Posted by Andrea at 3:48 AM

Email ThisBlogThis!Share to TwitterShare to FacebookShare to Pinterest
Labels: Metro