Gotta be clean for the New Year!

Poor Bay Girl... the final afternoon of 2011 was filled with HORRIBLE TORTURE for her! And by horrible torture, I mean.... a bath.

Actually, she was completely perfect about it. It was 75 degrees and beautiful outside, so I decided to bite the bullet and clean her up - it will probably be my last chance to do so for awhile! I've given her only one bath before, and it went pretty well, so I expected her to behave for this one as well. And I wasn't disappointed.... I even sprayed her face off with the hose, the poor thing. She was not particularly pleased about that but she allowed it with only a few minutes of facemaking following completion: 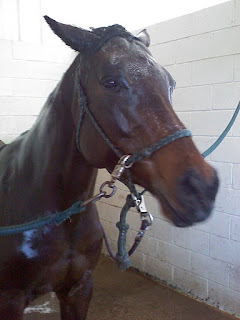 And if that is an upset face, I think I'm doing pretty well.


I was also horribly cruel and cut her mane with - o horrors! - a pair of dull scissors! Three months ago, I hacked off her long and scraggly mane with a pair of scissors, and she pitched a right fit about it... it was the first time I had ever worked with her, and I wrote her off as a bit of a nut. This time, she was better behaved, but still tossed her head and fussed a bit when I took scissors to her. Pulling at this point is OUT of the question. We'll get there eventually... but she doesn't even like to have her mane brushed, let alone tidied in any way, so this is a long way off! 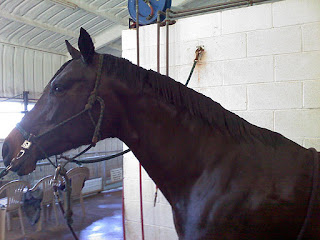 I guess it doesn't look too bad.

And best of all.... she didn't roll afterwards! ;) Just settled in to eat her alfalfa and dinner grain. Good girl.


As for now, it's onto the New Year.... and with that will come some new goals! Stay tuned, be safe tonight, and HAPPY NEW YEAR!!
Posted by Andrea at 5:27 PM