December is here in full swing, and with it has come cold, wet, miserable weather. We've been enjoying temperatures in the 60's and 70's up until now, but they are actually talking about possible snow flurries on Monday... whaaaaat!

This poses a small problem for the little miss mare that I hadn't banked on happening so early. We have no idea if she has ever worn a blanket in her life... ever. She may have, but the likelihood is no. Her winter coat is thin, and she lives outside. She has a shelter and a three-sided windbreak, so she'll in theory be fine, but it is supposed to drop into the 20's and be windy and sleeting by Monday. I won't be there over the weekend to try and see what she thinks of the blanket, but when the weather gets this foul, the horses are stalled and shut in to the barn. It stays pretty warm in there, but she certainly won't be able to buzz around if she gets chilly... poor thing. Blanket introduction is absolutely going to be a top priority for December.


December Goals:
1) Continue desensitization to touch (touch with hands, grooming tools, towels, etc, on legs, body, belly, and face)
2) Introduce turnout blanket
3) Continue working on not just catching, but haltering as well
4) Work on picking up front and hind feet with no kicking, pulling, or wiggling!
5) Go on walks around property and desensitize to anything scary we might find!

It feels nice to have goals again. I haven't done any goalmaking since last November when my Gogo reinjured herself for a second time.

My plan is to start bringing a second halter out with me whenever I go to catch her, and not do anything with it for the first few times. She is fine with me approaching while carrying her usual leadrope, but she might not feel the same way about a different halter. In an enclosed area, while wearing her normal halter and lead, I will start to introduce her to the new halter, and once we are accustomed to the idea of it, we'll start to work on putting it on overtop her other halter so that I still have control of her while haltering. We tried to take off and put on her halter only one time before... that didn't go very well! Once she beings to relax about putting on the halter in an enclosed area, we'll start to work on putting on the halter whenever I go out to catch her. Not sure how she'll feel about this... much praise and reward is in order for any little try she gives me. The plan is the same for the blanket... slowly introduce it to her, allow her to look at it, sniff it, inspect it, and then hang out in close proximity with it while we do other things that she already understands (like grooming). She accepts floppy things like sheepskin grooming mits around her, so from there we'll progress to larger towels and see how she feels about being rubbed with them and being draped with them. I can also try this with saddle pads once she understands towels, and get her used to the idea of bigger and heavier pieces of fabric being around and near her. (A blanket is a gigambo and scary piece of fabric... best to start small.) Who knows what this might trigger... I don't know if she was ever saddlebroke or not, or if she had any sort of previous and bad experiences, so this may elicit some seriously bad behavior on her part. We won't know until we get there.

Other than that, she has already let me handle her fronts without issue, so we'll continue doing that before we progress on to her hinds. My guess is that more than anything, she suffers from a serious lack of handling rather than any sort of major abuse (but again, I don't know), and it is interesting in how this manifests itself. For example, the poor mare is very skittish when you work around her right side, but much less so around her left... that is a desensitization issue more than anything. 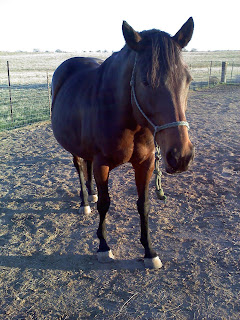