I had a bad idea that this might happen. I didn't want to say it out loud  just in case anyone thought I was crazy.... and I was hoping that I was just creating scenarios in my head about things that could potentially go wrong. Unfortunately, I should have just voiced my gut feelings on the matter, and stopped the process before it began. Roundpenning is going to completely 100% fry this mare's brain, and I am not going to do it anymore.

My first instinct for roundpenning Imogen in particular was that it was a terrible idea. This mare is not only the bottom of the totem pole and therefore completely willing to submit to people, but has also been horribly abused by them, and is convinced that they are all out to hurt her. The basic idea behind roundpenning is this: I am your safety zone, and when you are with me, life is good. If you do something disrespectful, or something you are not supposed to, I send you back out to work. Eventually, you seek me out as your relief, and want to come to me and stay with me. What does this do wonders for? Lazy, bold, stubborn, confident animals who don't respect you. What does this NOT work on? Low totem pole horses like Imogen who are so desperate to do the right thing, and so confused and terrified when you make any sort of aggressive moves at them at all. Somehow, distressed as I was with about her behavior yesterday, I convinced myself it was going to help.

My fear was this: Imogen is frightened by people or horses that make bold, assertive moves in her direction. She is MORE than willing to move her feet to get away out of your space - she falls all over herself to make sure she doesn't do anything to anger the powers-that-be around her. I personally reward EVERY little tiny try that she gives me, just because she lacks the confidence to really believe that she could ever do something that makes someone else happy. However, with roundpenning, if they come into your space and do something the roundpenner doesn't like - like move away in fear or jerk their heads because they are frightened of being touched - they get chased away aggressively, back out on the rail to work. This completely backfires on horses with this personality - they learn VERY quickly that you are an incredibly scary monster in the middle, and every time they come to you, you make rapid movements and scare them. It isn't long before they want absolutely NOTHING to do with you - far from establishing trust, you have completely destroyed it.

Unfortunately, this is exactly what happened tonight. Imogen tried a few times to turn to S and make a connection, but whenever S would rub her ears and she would lift her head and back up in fear, she'd get aggressively chased off. Pretty soon, even when she would lick her lips (which I don't take as a sign of relaxation, just a sign of massive stress - other studies have shown that licking the lips is a reponse to a release of adrenaline as well) and S would turn away to release the pressure, Immy would just keep trotting around at high speed, avoiding turning in to her at all costs. This must have gone on for an hour. She was lathered, trembling, and completely terrorized by the end of it all. They never joined up, and they never really connected. In fact, whenever S would walk away, all Immy did was stand there and snort, watching her leave with relief. It was bad... all around bad.

JenJ reassured me after the whole mess that her old horse Cash is the same way that Immy is - and she would NEVER roundpen him because it would completely fry his brain. Even back in the barn, she wouldn't let me touch her ears or head, and jumped every time I touched her or raised my arms. She was ready to bolt at any second, clearly traumatized. I can't do that to her... we're done with this nonsense. There is no reason to chase an already fearful horse... all she is going to do is associate humans with fear even more than she already does. No more majik hoodoo for me... I am going back to the basics - the ones which actually work. Sorry roundpenning, you are just NOT for this animal. 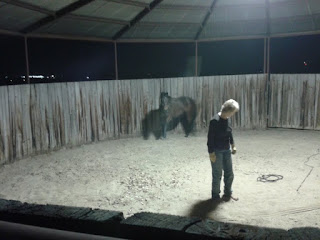 Email ThisBlogThis!Share to TwitterShare to FacebookShare to Pinterest
Labels: roundpen