Well, it took a few days, but the ground finally dried out enough for some real work - including our second ride!

Tuesday and Wednesday were a total wash. It rained all day Tuesday, and it continued all the way through Wednesday night. I had left a feed bucket hanging on the fence, and when I went to go peek in there to see how much rain had fallen, the bucket was filled to the TWO GALLON MARK. That's a sh*tload of rain, ya'll. Admittedly, since we have been in a prolonged drought, we did need it... but still.  Everything has been a right muddy mess ever since the rain stopped, the girls included.

Rain doesn't bother this yak... she stood out in it most of the day, on purpose! 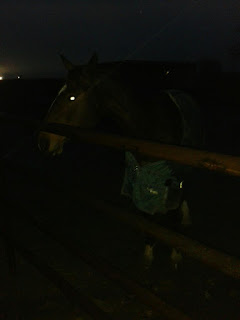 Thursday was surprisingly warm and beautiful (upper 60's), so I let both girls be naked during the day, and found them to be completely encrusted in thick, chunky layers of mud, so I did my best to extricate them from the crustiness before their workout. It was mostly a large failure, seeing as Texas mud means serious business - once our "black gumbo" mud (greasy, waxy, sticky, evil mud made of Superglue and snot harvested directly from the nose of the Devil himself) sets up on fur, there is no amount of currying that will break it up and get it off. You literally have to wash it out, or else you will pull half of your horse's haircoat (and possibly some skin) out with it. I'm serious, it HURTS them to groom them when they are crusted with black gumbo! Growing up in the Great White North, I've dealt with lots and lots of mud... but there is nothing like black gumbo. It is a whole 'nother beast.
Anyway. After I managed to rip half their hair out groom them as best I could, I tacked up P, and set out for a pony ride around the big pasture. Both girls had energy to burn - Immy pushed herself as far forward as her lead line would allow and tried to haul me along for the ride, and P shook her head and jigged sideways for the first 10 minutes of the ride. Once we warmed up, we trotted for 15 minutes, just to stretch all of our collective legs. P took a few off steps here and there, but for the most part she felt really quite good for how she has been. I'd say this level of work (light trail rides a few times a week) is more than reasonable for right now. 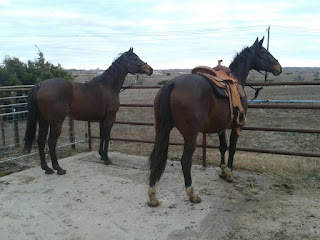 Honestly, I can't say enough about how much better Immy's attitude has been. She is a brand new horse at the new place - back to her old sweet, curious, cuddly self. She is putting on weight and muscle already, and everything from her attitude to her poos have improved. S, the barn owner (and my friend) is also going through some ulcer issues with her horse, so we're spending a lot of time coming up with ways to be proactive, brainstorming for other ideas, and sharing and swapping supplements and ideas. It has really been a lot of fun.

After our successful pony on Thursday, it was high time (and dry enough, thank god) to get on Immy for her second ride!! I had S help me this time around, seeing as she scooted the first time when I mounted, and was glad that she was there - Immy was surprised again by my right leg, and scooted forward again. S led her around a few times, and then released us - Immy wanted to stay with her, but once she was on her own, she was fine to walk, whoa, and steer without assistance. I was even able to put my legs on her and start to use them along with the verbal command for "walk on." She was making some very smooth whoa and walk on transitions, which I was very proud of! Last time, she zoomed into all of her walk on transitions, and this time she was much quieter about it. Good girl!
Getting off went better this time as well - I had S come back and hold her again (after we had a whoa in the center of the pen, and stood there for awhile - standing still is a VERY vital lesson to learn!), and stayed right up against her and petted her as soon as I got down. She started a bit, but didn't go anywhere, and stood for some pets and cookies once I was down. She'll get it, it won't take long! 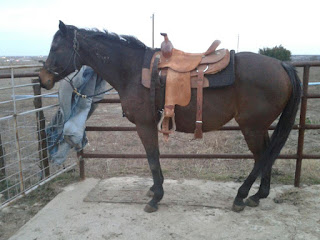 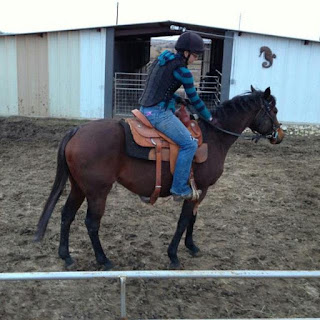 Our bridling issues are the still same. Thankfully, the equine dentist comes on Monday, and shortly after that I am going to have some craniosacral work done on her. I think this will help her hugely, as opposed to trying a chiropractor... definitely excited to see what happens with both. (Maybe when she is knocked out for her teeth, I can finish pulling her mane and give her a bridlepath!)

Today, the temperature dropped from the 70's to the 30's during the day when a nasty cold front blew in, and by the time I was done with my clients and headed back to the barn to work the girls, a stiff and frigid wind was blowing. I tried to lunge Immy in the roundpen, but alas, the mud was still horrible in there, and she about wiped out at the gate on the very first lap. I called it quits for the day, and bundled the girls up in their winter blankies for the night. It is supposed to be in the teens tonight (!!!), so we will see if I am brave enough to get on a little zippy mare when it is howling wind and freezing cold! We might just go for another pony instead!