Immy's third ride brought some BIG and positive changes to her under-saddle life! I am so, so proud of her for being such a good girl today!

The day started off MISERABLY cold - 14 degrees when I fed everybody breakfast - and I was NOT keen to try anything that early in the morning. All my clients for the day rescheduled due to the weather, and so I spent most of my day trying to play catch-up on all the stuff I've been trying desperately to get done, but haven't been able to due to a lack of time. I actually had a super productive day, and at around 3 headed back to the barn to ride the girls. It had mercifully warmed up to a balmy 40 degrees (fml), but with the help of my trusty quarter sheet (and many, many layers for myself), I was ready for anything.

I had S hold her again while I mounted, and we started out in the same small holding pen outside of the barn as we did last time. The pen is actually a really ideal place for this sort of thing - she is closed in a small, square area, and has all of her friends right there with her (on the other side of the fence) for moral support. She is familiar with the area, and feels safe there. Today, for the first time, she didn't start and jump around when she felt my right leg touch her side as I was mounting. She started a bit when I first put my left foot in the stirrup to start, but settled in well. By the time I made my full mount, she was quiet and immobile. She stood still when I put my right foot in the stirrup too, no scooting! Awesome!

I had S let me go, and we went off in the pen to do some basic steering and whoas. She did so well that I asked S to let us into one of the pens next to the barn, so we could work in a bigger (but still enclosed) area. It is roughly the side of your average small arena, but still in a familiar area, so it was perfect. It really is amazing how NOT spooky she is - she has never seen that particular pen before, but she walked right in there like, oh, right, here we are, let's do this! 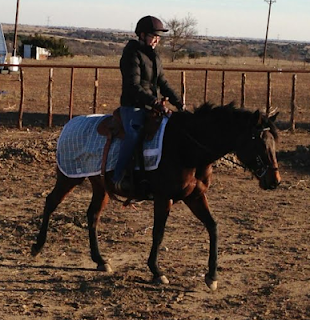 Sweet little thing... she is SO TINY!

After some basic steering and whoas, I asked her for a trot. Word to the wise - if any of you ever meet Immy, don't ever cluck at her. I inadvertently taught her that clucking means trot-right-now-immediately-here-we-go. Same goes for the kissy noise... she canters the second she hears it! I will never, ever have problems with forward energy with this mare!
She was a little surprised at first, and went into a zoomy trot, without steering or brakes. We managed to stop on the far end, and did some more walking. We attempted a few more trots, all with varying levels of zoomy, but it didn't take long for her to settle into a rhythm. By the end, we were trotting AND steering AND stopping, and only with a little bit of zoomy here and there. We made it almost all the way around the pen, quite a few times!

The video quality isn't great, but there you are! We did it! 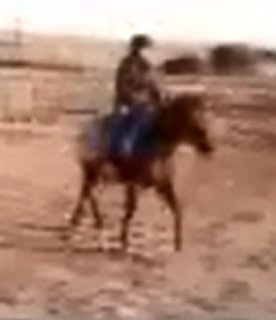 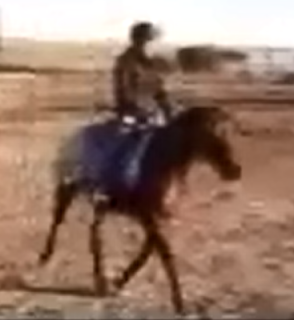 At the walk, she had a few moments where she actually took a contact all by herself already, and stretched down to find it. It is time to put this girl in a dressage saddle, I say! (Also, I bet M would like her saddle back eventually!)

She was really quite good for the dismount too - she started a little, but didn't go anywhere, and afterwards tried to take the reins between her lips and play with them a little bit. She has this very shy, very gentle, very timid playful side to her that is just now starting to come out a little bit. It is so very sweet, so very shy, and so very heartwarming to see. I am not one to let my horses chew on things (EVER) as a rule, but to see her trying to play just a little bit with her reins today melted my heart. There is no way I'd discourage her newly emerging personality - unless, of course, she starts to actually chew on things. Then we'll have a discussion about it!

Out of all the lunging, grounddriving, groundwork, and other things that we have done, I really think she likes riding the best. She has been the quietest I've seen with ridden work, and had the happiest expression on her face when we were done. I know I'm waxing anthropomorphic here, but she really looked genuinely pleased with herself and proud when we were done. She just looked... different. Like she finally, finally felt confident in herself.


I rounded out the day with a nice long trail ride on P with S and her horse. The company was good, the horses were on their best behavior, and we froze our BUTTS off on the way back. The sun had started to go down at the halfway mark, and by the time we got back, temps had dropped almost into the 20's. We were FREEZING! I hate this weather, when is spring going to get here! Surely it can't be THAT far away!


As for other things, I had thought that the dentist was coming tomorrow, but we misunderstood him and I guess he is coming in a week or two. Bummer on that... the sooner he can get here, the better! 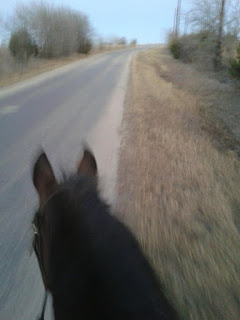