I have a crazy idea. Readers, as relatively sane people (for the most part), I am relying on you to tell me whether or not you think it is a good idea or a terrible one.

Immy is doing very well under saddle. With a good few more rides under her belt, I can safely say that she steers well, stops well, and responds to quiet, gentle aids well... her only real issue is that she really would rather be trotting at 9000000 miles an hour instead of walking. She does try to break to the trot a few times when she first starts out, which is the exact same thing she does when lunging or grounddriving, but that isn't surprising or concerning - when you tell her to slow it down, she does.
The big problem here? The bridle. While everything else has improved massively, bridling has only gotten worse. Once the headstall is on, she is fine, and she takes the bit no problem. But getting the headstall over her ears? She outright wiped out and got stuck upside down against a stall in the barn aisle the other day in an effort to get away from it when I was removing it. She is thankfully unhurt, and so am I, but it didn't help her fear. The dentist was supposed to come Monday for her teeth, but he was a no-show and is not returning our calls. The other dentist I wanted to use just left to go to Houston for 3 months, and won't be back until spring. Everybody else in the area does a hack job and will only make any problems sh has even worse. The craniosacral therapist is also going to come out as soon as she can, but she is in California for at least another week. There isn't a chiropractor in this area that I like or trust. I am feeling very stuck here.

I'm backing off the bridle for now... what we're doing isn't working, and we need to take a serious step back in order to work on her headshy issues. She is reluctantly letting me touch her poll and ears with my hand, but she does not like it and if I do so much as sneeze while I am working up there, she is gone. I worry that this is going to affect her work under saddle - if she starts to worry about saddling because she knows bridling is also going to take place, or if she goes into her riding work all freaked out because we've just been workin on bridling, that is going to be a disaster. It is time to shake things up a bit, and try something new while we separate the bridle/ears/headshy issue into its own exclusive category.

I had a crazy idea, after thinking about it for awhile. I want to continue to work with her under saddle and get her out into the world (on the trail, in other arenas, etc.), and I want to make it all a very positive experience for her. I want her to NOT ever see me coming and think, "oh crap here coms that lady who touches my ears every day!" and stop being catchable or stop enjoying her time with me. Yes, we have issues to work on with the bridle and her head, but I don't want that to be this huge hurdle we are fighting to get over while we wait around for saddle time, because that will just frustrate the both of us. And then it hit me - why don't I ride her in a rope halter?

English folks will think I am crazy, and I understand that because I used to have the same mindset (how can you control that horse without a bit?). Having seen lots of trainers down here starting their babies in rope halters, I have a new appreciation for it - it saves their mouths should they do any stupid baby antics like buck or run off, and it has plenty of whoa in it should you need to stop. You can't really do dressage in it (in the legal way, anyway - you need a bit to show), but you can teach them to be soft, responsive, and solid citizens. I do all my groundwork in a rope halter now, so she is very familiar with the idea of it. Why not? I will be able to get her out experiencing new things and enjoying her saddle time, and can work on her head and bridling and whatnot as a totally separate issue. That is assuredly going to take a long time... I had no idea how extensive it was until now. The girl is an emotional trainwreck about it, and it will be a long process until she isn't anymore.

I joked with Jen yesterday that with her love of trotting as fast as she can for as long as she can, I should make her into an endurance horse. That way, I could ride her in a rope halter, never have to clip her, and let her mane grow wild and free (she is not amused with my constant pulling, braiding, and taming).

It was meant as a joke, and obviously we can't just skip around issues like clippers and bridles. But the more I thought about it, the more I started to like the idea. Why not start her out as an endurance-type horse? And once she is through her other issues, then progress into the sport of our choosing? She'll have saddle time, experiencing on the trail, experiences with strangers and new places, and it will give us time to sort through her other fears and problems. And we'll both be doing something we love, which is the best part.

Why not? The more I think about it, the more I like the idea. 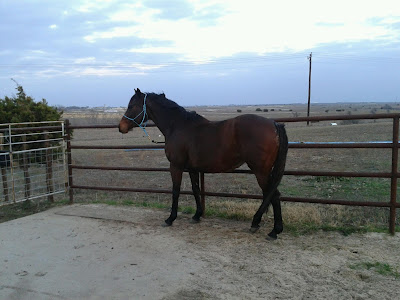