I finally have a few seconds to sit down and write! Unfortunately, I had to be half-crippled in order to do this... my left hip, sciatic nerve, knee, and shin are all screaming with sciatica, bursitis, splint pain, and general crappiness at the moment. I opted to rest and blog versus ride for the evening... not the choice I wanted to make, but I really didn't have an option. I need to remember that on days when I have to ride other horses, I should just forget about working my own - sitting in western saddles that don't fit me well and jar me around horribly just KILLS me. I hurt so bad right now that I just want to die! (Sitting in my own saddle doesn't hurt at all, for comparison.)

Anyway... we had quite a week! It didn't go entirely the way that I wanted it to, but that is the way life works, and the weather as well. After another productive lunge session on Saturday, I opted to hop on relatively early in the morning. It was very chilly, and everyone had a bit of a wild hair that day, but I lunged her down in sidereins for quite a long time, and decided to go for it. She, of course, was still feeling extra spunky despite it all (you really can't tire this mare out... she can go FOREVER and never get tired!), and the moment I got on and asked her to walk off, she exploded into a series of bucks which took us halfway across the pen. She then followed this up with lots of jigging and a high powered bolt when she didn't steer away from the railing and my stirrup clanged into the metal pipe. FINALLY, she settled down, and we got a little bit of decent walk/trot/steering/whoa in, but that was all I decided to work on for the day. I figuree that not dying was a pretty good goal for that day, considering what I had to work with. Hotheaded mares...

Sunday I had planned on another ride, since the weather was so glorious, but she had other ideas, and didn't want to play that day. At this point in our relationship, if she doesn't want to come to me andintereact, I leave her alone for the day. There is no point in chasing her around until I corner and catch her - she will only be totally wired for sound and frightened when I finally get ahold of her, and no productive work will come of that. Instead, we worked off of my number one rule: if you don't want to come to me and be caught, that is fine, but you don't get to eat dinner. (They have loads of hay, don't worry... they just don't get fed their grainfoods!) She wanted to be near me when I was fussing around in their pen, but didn't want to actually be caught. I left it at that, and pampered P for a bit instead. (P of course promptly rolled and got filthy as soon as I put her back out...)

Monday ended up being a complete wash-out, seeing as by the time I got to the barn in the afternoon, it was 30 degrees and sleeting sideways. It had been in the upper 50's in the morning when I left, so I had left the girls naked for the day... poor things were frozen when I got there! I bundled them up, fed them, and had some drinks and dinner with S instead. Winter, just GO AWAY already, will you?

On Tuesday, the craniosacral therapist came! I hadn't ever seen a cranio therapist at work, and it was very interesting. (A bit more on craniosacral therapy here, if you aren't familiar with it.) The first thing Immy did was practically fall asleep the moment she started to work on her... she wasn't relaxed enough to actually zonk out, and kept forcing herself back awake, but she was very relaxed. She didn't like when the therapist reached up to work on the top of her head, of course, but once she was up there she didn't object. She had a horrible TMJ issue and was biting her tongue, had compression issues on her right side that were causing her some issues with vision (which resolved once she was worked on.... her right side is her spookier side, and that makes total sense!), and was in general completely locked up and tense throughout her entire body, right side especially. The therapist even noted that the way she moved the right side of her body was stiffer than the way she moved the left side. 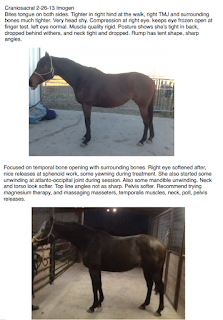 Look at the difference in her posture! That is just wild. I'm going to try the recommended magnesium therapy on her and do the stretches and massages that she showed me, and we'll see how she is doing in three or four weeks. If all is going well, and this is helping, we'll schedule another appointment then. 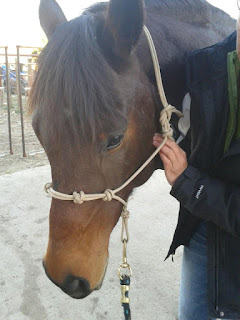 On Wednesday, it was pool day! She completely surprised me by walking on the trailer with no hesitations or issues whatsoever, all by herself! This was leaving home AND leaving her screaming maniac sister, who is in heat and absolutely losing it down in her paddock. YAY! Progress, thy name is Immy!
Once at the pool barn, in her paddock, she was a total whackadoo. She trotted around screaming her head off for three hours before I finally got tired of it, and when another horse went into our Eurociser,  I put her in there too. If you have that much energy mare, you need to get it out!

That was of her at a slow trot. The program we usually do is a varied one, and they go both ways at a walk, jog, walk, trot, canter, and walk again for a 20 minute cooldown. The entire thing takes about 50 minutes. While I am not usually one for putting them on circles for long periods of time, she is strong enough, flexible enough and fit enough that the benefits outweigh the negatives. She didn't so much as break a sweat, and kept up with the front panel the ENTIRE time. Thankfully, back in her pen, she had just enough fizzle taken out of her that she was finally able to just stand still and eat her hay for awhile.

After an hour or two of resting following her first unintentional workout, it was pool time! She delighted me by walking right in like a big girl (last time she fussed quite a bit... it was only her second time, and that is pretty standard. By the third time, they almost always 'get it'.) She worked out VERY well, and is starting to go MUCH straighter! (For comparison, look at how crooked she was last time.) 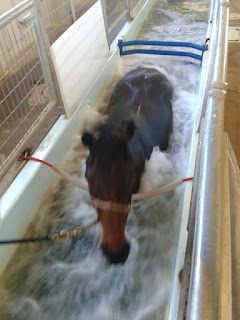 She STILL was wired for sound when I first tied her out to dry.... 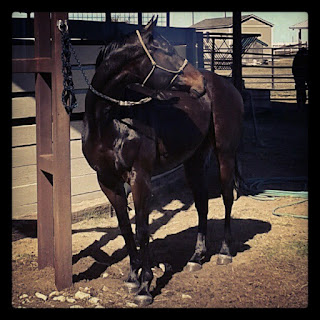 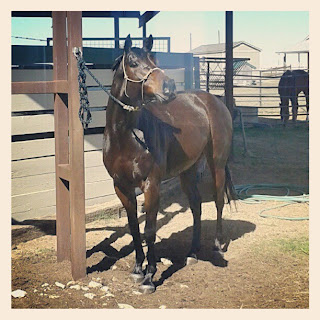 .... but FINALLY, she started to yawn and relax. She yawned a LOT during her cranio work... she yawned a lot after her swim.... she yawned after she ate dinner yesterday.... and I realized that up until she had the cranio work done, I had NEVER seen her yawn before. 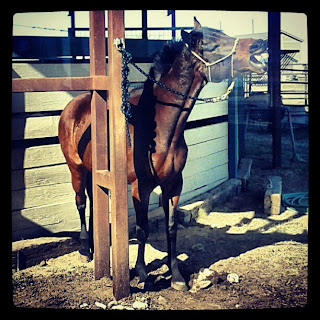 (She wasn't really tired... she went back in her pen and trotted around screaming some more!)

Thursday I was way, WAY too crippled to do anything with them, so I used it as a rest day. We'll see how badly I am feeling today, but since we are in a new month, I'll at least be assessing our goals and looking to see what is in store for March... so glad to leave February behind!!